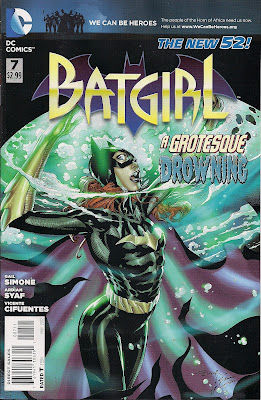 Batgirl battles new reprobate Grotesque, whose unique selling point is that he likes the finer things in life. Except shoes ... he's a barefoot bad guy. The devil-masked foe's not exactly dripping with charisma but as filler villains go, he's entertaining enough.

The real reason to buy this issue is a sizeable scene in which Batgirl visits old pal Black Canary to release pent-up frustrations, physically and conversationally. And suddenly, it's like Flashpoint never happened; here's the Barbara and Dinah I know, two fighting females whose firm, feisty friendship makes them stronger (click on image to enlarge). 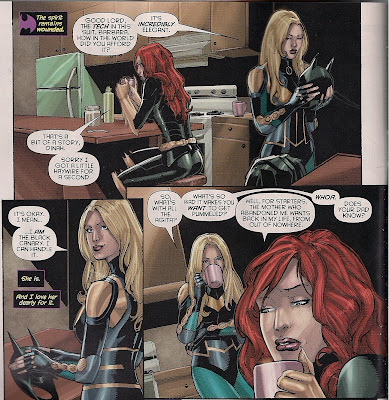 Best of all, Dinah advises Barbara to pack in the whining about being able to walk once again - her regained mobility is a gift and she should enjoy it, like any sane person would. And so it is that for the rest of the story, Barbara is chirpier, better at being Batgirl. Until the final page, when it's two steps back. I won't spoil the scene, I'm too busy banging my head off the desk.

Happily, there is other good stuff - the returned Barbara Gordon Sr finally visits Commissioner Gordon, having not spoken to him since she walked out a decade previously. We see a surprisingly vulnerable Jim Gordon, and learn something of why, in his wife's eyes, she had to leave.

Regular artist Ardian Syaf draws two-thirds of the issue, with Alitha Martinez handling the central section focusing on Dinah and Big Babs. Talented inker Vicente Cifuentes maintains continuity and everything looks great. The conflict and character scenes are equally strong, no matter who's drawing, but Martinez gets extra points for not presenting the elder Gordon as Barbara's twin.

With luck, this is the storyline in which writer Gail Simone puts Barbara's survivor's/walker's guilt to bed, at least for a good while. Because this could be a great comic, it just needs to stop hobbling itself by dwelling on the past. I was against Barbara walking again, dropping her Oracle role, but the decision was made - if we're not going to embrace the new possibilities, why bother?

And those new possibilities include regular team-ups alongside Black Canary, because they truly bring out the best in one another. DC is retooling the old World's Finest title, which for decades teamed Superman and Batman, as Worlds' Finest, starring Power Girl and Huntress. What I'd like to see is DC cancelling both this book, and the disappointing Birds of Prey, and giving us The Brave and The Bold, starring Batgirl and Black Canary. Written by Gail Simone and pencilled by either of this issue's lead artists, it's a surefire winner. Anyone else?
Alitha Martinez Ardian Syaf Batgirl #7 review Black Canary Gail Simone Vicente Cifuentes