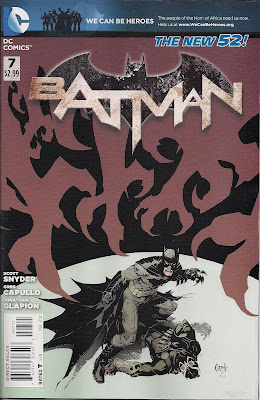 The Court of Owls story goes on. And on, and on, spreading its wings through the entire Batman Family of titles. And Jonah Hex. And likely Tiny Titans, if it weren't being cancelled - well, there is a Talon in there!

The Talon in here's an entirely different guy, though, and Batman discovers just who he is after examining his almost-corpse in the Batcave. Almost? Indeed, it seems Talon has a Get Out of Death Free card, in the shape of a tooth. The idea makes sense in a comic book science-meets-history way - it's rather cool, and a nice change from the Lazarus Pits generally piped in whenever a Batman character needs a speedy return from the other side.

Shockingly, someone closer to Bruce has a similar trick tooth, one he quickly knocks out on realising that this particular Talon is the great-grandfather of ... Dick Grayson. It turns out that the Court of Owls had its claws deep into Haly's Circus, and every ten years a kid would be selected for Talon training. Dick got the tooth, but not the assassin classes, Bruce's adoption having saved him from the Court's clutches.

I tell you, I didn't find the Court of Owls that scary until I realised they even owned Gotham's dentists. How many check-ups has Dick had over the years, and the Tooth Wonder gone unremarked?

Then again, given the evidence here it's entirely likely that if Dick ever did have toothache, Bruce just punched the offending molar right out of his head.

Rattled at the thought that the Court of Owls were nesting so close to home, Bruce gets terribly melodramatic about the city. Dick, bless him, basically tells Bruce to get a grip and quit being a daft old nelly. It's just a shame Dick doesn't smack him one back (click on image to enlarge).

Other scenes this month see the Court of Owls wittering on as cornily as Bruce, prior to sending a whole bunch of Talons into the air to 'take back our kingdom'; nearly dead after the events of the last few issues, Bruce has a revelation about the fate of the bat that inspired his pyjamas; and some woman named Harper (Jamie, Nightwing's old pal?) revives the fallen Batman with jump leads but gets neither thanks nor job offer.

It's an interesting issue, a crescendo of drama from writer Scott Snyder. My only real problem is that I don't quite get what the Court of Owls wants. There's the aforementioned business about owning Gotham, but given that the Court is made up of Gotham's richest, surely they already own the city? Why do they need to dress up and talk like bad actors? If anyone can explain it, I'd be most grateful.

The art by Greg Capullo is hugely effective at conveying the creepiness of Gotham, from the fate of the First Bat through to the freeing of the All-Talon-Squadron. My favourite scene is the scraggy Batman's arrival outside the Batcave, an alley filled only with darkness and a gun-toting Alfred. It's first-class work from Capullo and colourist FCO. A shout-out, too, to letterers Richard Starkings and Jimmy Betancourt (of Owls? Dentists?) for good-looking calligraphy.

I'm ready for this story to wrap - I know, some hope - but if more individual issues are this good I can take the Court of Waffle awhile longer.
Batman #7 review DC New 52 FCO Greg Capullo Jimmy Betancourt Richard Starkings Scott Snyder