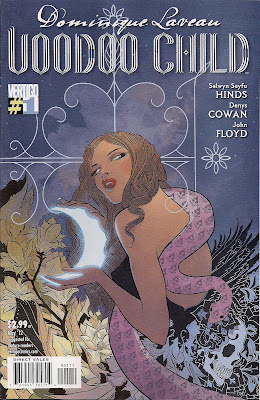 New Orleans. Post-Hurricane Katrina. Grad student Dominique Laveau finds her pals disemboweled, escapes death by werewolf when snakes spring from her brow, then falls into the grave of legendary voodoo queen and namesake Marie Laveau. She has visions of the massacre of the latest of Marie's successors and her court, and is attacked by a gunfighter type tossing arrowheads. She escapes, only to find her aunt dying in a pool of blood, and herself attacked once more by the guy from her vision.

It's fair to say that this latest Vertigo title is embracing the grandest of Guignol. It's blood and guts and gore and effing and blinding. The pages that don't feature supernatural horrors contain a gun battle between Dominique's cop boyfriend Allan and local gangbangers. I found the whole thing rather exhausting, but in a tiresome, rather than exhilarating, way.

Not helping is the narration from writer Selwyn Seyfu Hinds that reaches for the musical, aims for significance, but in fact recalls the poetry of teenage Sandman fans. The script's not all bad - the characters', and narrator's, 'N'Orleans' accent rings true, and Hinds obviously has his story worked through - as well as Dominique and Allan, we meet local fixer Chancellor Malenfant, who uses voodoo to maintain his power base. And I'm intrigued by the idea of setting folklore against the backdrop of post-Katrina New Orleans - that's what persuaded me to try this comic, along with the presence of the excellent artist Denys Cowan, in the first place.

But a story so magic-centred should have a bit of charm; this is just brutal, in-yer-face stuff, and there's an uncomfortably self-conscious feel to proceedings. This extends to Cowan and inker John Floyd's smugtastic habit of signing the splash pages, tripping the narrative up every time. That apart, the artwork is the saving grace of the book, with the realistic approach grounding the horrors. It's just a shame the horrors are so frequent. The odd spilled internal organs, fine, let's see the stakes, but too much viscera gets old very quickly (click on ever-so-slightly censored image to enlarge). 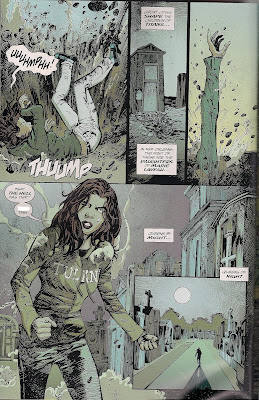 The elegant cover by Rafael Grampa doesn't match the mood of the book, with this Dominique's self-possession reflecting a woman light years from the character we meet inside. Plus, the posing is awkward, and the snake gives the impression that our heroine's a hunchback. I really like the logo (even without the necessary colon) and colouring, though.

I hope there's an audience for this comic. I love the idea of it, but so far the execution isn't for me.
Denys Cowan Dominique Laveau: Voodoo Child #1 review John Floyd Rafael Grampa Selwyn Seyfu Hinds Vertigo