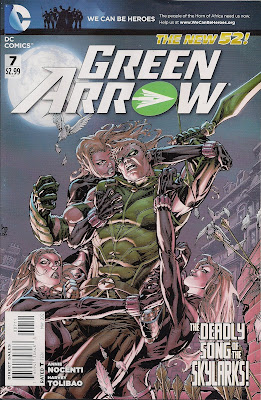 Take three girls. Three attractive, deadly girls. Triplets with massive assets. And never mind their brains, they're stunning to boot - this is comics - and their blonde charms prove useful for getting Green Arrow's attention.

Along with hundreds of tiny arrows aimed at his head.

Ann Nocenti gets her run as writer off to a splendid start, presenting an Oliver Queen who's just having fun. Throw anything at him, and the unflappable archer will toss back a quip worthy of Ian Fleming. Or perhaps a line from Shakespeare. Along with a killer judo move and maybe even one of those arrows he's named after. This is an Oliver Queen channeling Robert Downey Jr's Iron Man, a guy so bright he's constantly fighting boredom. So when three girls show up inviting him back to Daddy's place in Canada to look at the arrows they've invented for him, and they include flak, six-shooter and 'mindprick' arrows, of course he's going to go. They may be trying to play him, but if so, well, Ollie knows a thing or two about (ahem) shafts.

The Skylark sisters sound like a lounge act, but they're not to be dismissed; think Marvel's Stepford  Cuckoos with incredible toys. Not that this bunch constitutes a group mind - there's a rebel in the nest, and whether that makes her their strongest asset or a weak link remains to be seen.

This really is a delightful surprise, the Green Arrow book DC should have given us from the start of the New 52. I packed in this series with #2, but I'm back and can see myself hanging around awhile. From the story's punning title, Triple Treat, to the final spread showing that Ollie's flights of fancy have consequences, this is a tremendous read.

Away from the adventure, Ollie quits his boring job as the public face of Q-Core, and thank goodness for that - it just doesn't suit his devil-may-care ways. That butterfly mind of his, along with his athletic skills, is better employed out in the field (click on image to enlarge). 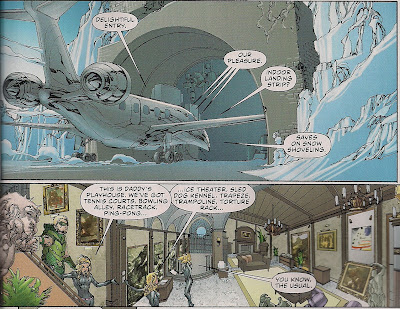 Nocenti's not the only newcomer this issue, with Harvey Tolibao signing on as artist. There are some rough edges - he hasn't a good handle on upward angles, making for a few Egg-Fu-like physogs. But his storytelling's good, he doesn't skimp on backgrounds, the action scenes come off and the work is just plain interesting to look at. As for the dodgy upshots, a study session focusing on the great Gil Kane nostril-shots should help. Tolibao's style reminds me a little of the early work of Richard Piers Rayner and Mark Buckingham, which isn't a bad place to start. With an old hand editing this book - the excellent Joey Cavalieri - Tolibao could come on in leaps and bounds. The first tweak I'd make would be to lose the presumably realistic light marbling on the goggles - Green Arrow's a hero who lets his personality play and we need to see his eyes.

The rest of the creative team - that's Richard and Tanya Horie colouring and Rob Leigh lettering - play their parts to perfection, supporting Nocenti and Talibao all the way. Howard Porter provides the dramatic cover while Hi-Fi adds the tones. And ... Blimey O'Reilly... this book actually has a weapons consultant, Raphael Pierson Sante. Well done that man (any chance of making me a mindprick arrow!).