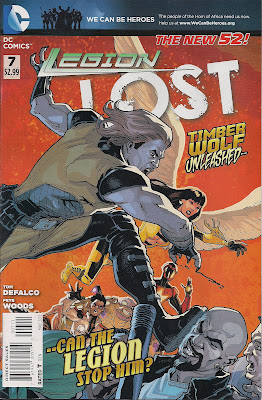 Trapped 1,000 years in their past, seven members of the 31st Century's Legion of Super-Heroes search for bio-terrorist Alastor. The trail brings them to New York, where Tellus gets involved with a young woman in need of a hero, and Timber Wolf alleviates the team's need for cash.

The woman needing help is car crash victim Katia, whose stupidity has led to the death of her friends. As she fights for life her subconscious mistakes medics for assailants, and her silent cries are heard by Tellus. Thinking she's in urgent need, he tracks her down and while his colleagues tut at the state of 21st-century medicine, he does what he can to help Katia.

Timber Wolf, meanwhile, goes off half-cocked when he notices a local youth spying on the team, and uses him to steal the profits of a drug gang - after beating them up, of course. While I'm not in favour of pushers keeping their dirty money, neither am I for superheroes lifting it; it'll be interesting to see whether other members' reactions are explored should they learn the source of their newfound cash. I'm not convinced this will be addressed, though, as writer Tom DeFalco and artist Pete Woods treat Timber Wolf's strutting off with the moolah, telling his wannabe sidekick that he's not getting any, semi-humorously - I can hear the plinky plonky Desperate Housewives soundtrack. Yes ...

The Tellus scenes are thoroughly predictable, but at least equal more spotlight time for my favourite telepathic frog and open the doorway to some intrigue.

Speaking of spotlights, I'm sad to report that in his first issue as solo-writer, DeFalco throws out one of the techniques that has made this series so enjoyable - the rotating narrative. I was expecting Chameleon Girl or Gates to be giving us their insights this time, the other members having had a turn, but sadly we get an omniscient narrator. There are decent moments for the characters - Chameleon Girl gets her first sniff of a personality in decades, for one - but I want more.

As for the other members, everyone gets a moment, even if there is more bickering than I'd like - Wildfire, in particular, is back to the grating ways of his earliest years. Overall, though, DeFalco does a creditable job and with luck, as he becomes more familiar with the characters, he'll embrace the narrative-as-baton idea.

On the artistic side, Pete Woods produces more lively work, with highlights this time including Tellus's mindscape and Timber Wolf's first meeting with bad boy Oz. And Brad Anderson's colours do a good job of bringing out the contrast between the New York streets and the private realm of Tellus. And Travis Lanham's letters are unobtrusive, but vital.

While I'm itching to see the arc plot with Alastor tied up in a neat bow, this is a fine change of pace issue, one that has me rooting for DeFalco. He shows a decent grasp of the set-up and characters, makes the big action scene speak to a story point and delivers a message worth hearing - don't text and drive, kids.
Brad Anderson DC New 52 Legion Lost #7 review Legion of Super-Heroes Pete Woods Tom DeFalco Travis Lanham