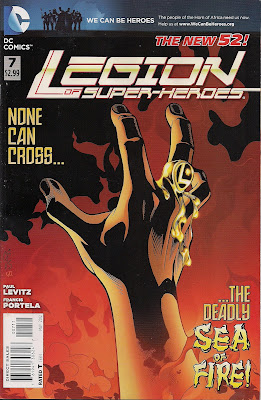 Surprise surprise, the two China-set plotlines begun last issue are linked - the polluting fire raging in the Xinjiang region is the work of the future cultists running amok in the urban area. Thankfully, Legionnaires are at both sites and ready to fight. Holding back the fire are Element Lad, Sun Boy and Chemical Kid, while Dragonwing takes on the rogue metahumans - including her sister - in partnership with Chameleon Boy.

Back in Metropolis, Comet Queen and Harmonia Li are preparing to join the fire sub-team when Dream Girl, via holographic projection, tells them to get to the other emergency, Cham's flight ring having gone offline. And they don't arrive a minute too soon, as Cham has been lamped by one of the villains, and Dragonwing beaten down by force of numbers. Comet Queen shows that despite her bonkers slang ('Wow - some starburn, Legionnaire!') she's a force to be reckoned with, while the elemental Harmonia shows immense levels of power.

While this is happening, Dream Girl checks in with Chemical Kid and co, and finds the new Legionnaire growing an inferiority complex in the face of his more experienced colleagues; returning from a space mission, Mon-El decides to call a leadership election in the face of Brainiac 5's continuing attempts to snag the role; and the Dominators unveil hybrid Daxamite Dominators to use against the hated Legion.

It's a busy issue, with much in the way of incident, action and personalities at play. It's good to see Chemical Kid's ego dented a little, and even better to watch Sun Boy cut loose and Harmonia get out of the lab. Dragonwing's super-spit remains a particularly unappealing power, but she shows great Legion spirit, while Comet Queen is, as ever, a delight. There's not much I'd change in Paul Levitz's script; I'd make the scene transitions less filmic and more comic book-ish, and properly introduce the individual baddies attacking Dragonwing, but that's about it. 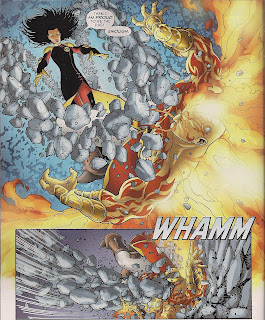 On the art side, Francis Portela continues to own this book, juggling hordes of characters and settings with style - an awful lot of work has gone into these pages, and it shows. Finally, this issue, he gets to design a mission suit for Harmonia, and it's rather nice, making her look endearingly witchy (click on image to enlarge). Unlike most other DC New 52 books, the Legion of Super-Heroes isn't awash with splash pages - outside of the opening page, there's just the one, and it deserves the room. Otherwise, the many attention-grabbing moments are made to work in smaller panels ... that's talent, that is. And colourist Javier Mena deserves a cover credit for his big contribution to the artistic success of this book, making the pages bold and bright without ever hurting the reader's eye. Rounding off the core creative team is letterer Pat Brosseau, whose work is ever dependable, never boring.

The cover's a tad dull, mind. I've seen far more imaginative work from penciller Chris Sprouse and inker Karl Story. Guy Major's colours are fine - there's not much for him to interpret here.

The Legion books remain a hard sell to younger fans, which is a shame, as the quality is always high. This series certainly deserves to be a big hit. I'd love to see a cheap digest of the first seven issues of this series, to give newcomers a chance to bask in the sheer scope of the 31st century, and get into the rhythm of the characters. How about it, DC?
Chris Sprouse DC New 52 Francis Portela Guy Major Javier Mena Karl Story Legion of Super-Heroes Legion of Super-Heroes #7 review Pat Brosseau Paul Levitz