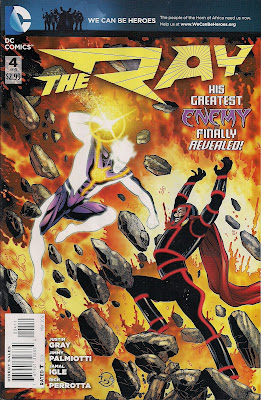 The Ray is down and almost out. If he's going to save girlfriend Chanti from the reality warping wannabe film director Thaddeus Filmore, Lucien's going to have pull something big out of the bag.

Which he does, unsurprisingly. What is surprising is the way he cleans up after the events of the last few issues, combining his new super-powers with gifts given him by his parents to allow everyone a second chance. The final pages of the book see the Ray enjoy some downtime with Chanti before saving San Diego office workers from human bombs. And the mini-series ends with the Ray receiving an offer to join a certain government organisation.

Bravo to writers Justin Gray and Jimmy Palmiotti, and artists Jamal Igle and Rich Perrotta, for a thoroughly entertaining introduction to the latest incarnation of The Ray. Lucien and his friends and family have been great company and little by little we've seen what our hero can do with his light abilities. His biggest display of power here motivates a bombastic spread from Igle illustrating just what the Ray can do when he's running on instinct.

The rest of the artwork's none too shabby either; I've still not warmed to the hero's visual, but I do love the energy with which it's drawn. And the supporting characters have a humanity that's rare in comics, being seemingly captured rather than posed. Their naturalism matches the easy dialogue of Gray and Palmiotti. Deserved nods, too, to colourist Guy Major and letterer Dave Sharpe for sterling contributions.

I've no real complaints about this issue, just a headscratcher: why is there a credit stating 'The Ray created by Jack C Harris and Joe Quesada'? A Ray, sure, but not this one. And the last Ray wasn't exactly the original, so it's not as if DC can claim Ray Terrill was the source of all Rays. It seems someone had a good agent.

I hope this book has sold enough to bring us, if not an ongoing, an occasional mini-series or special. Lucien is a likeable character with an interesting set-up and I'd like to get to know him better before he's lost among the hubbub of the New 52.