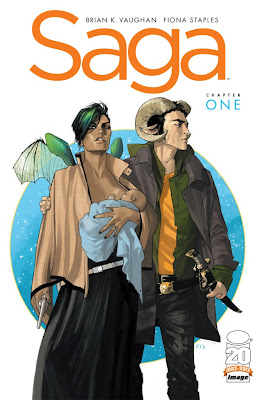 Love and war, they're the concepts on which this new series from Brian K Vaughan and Fiona Staples is built. So while the details involve other worlds and alien races, the backdrop comprises notions we all understand instinctively.

This first issue sees Marko and Alana become parents while on the run from the armies of Wreath and Landfall, their respective planets. Drafted into opposing armies to fight on a third world, Cleave, they found one another, deserted and donned matching rings. Identifying as husband and wife, having a hybrid baby girl, puts them on everyone's radar - the leaders want them eliminated before their message of love spreads.
So it is that war-weary Prince Robot IV and magical mercenary The Will are commissioned to find and kill Marko and Alana. The interspecies Romeo and Juliet, meanwhile, have no idea of the attention they've brought on themselves, believing that if they can just get offworld, they can make a life for themselves.
There's an awful lot of backstory, and incident in the here and now, in Saga's debut issue, and I've not even attempted to summarise it all. I hope I've given some idea of the core narrative, though it's the specifics that will have me coming back for more. The tender relationship between the lovers. The complex characters assigned to bring them in. Bat-winged secret agent Gale and unicorn-horned Vez, who give IV and The Will their assignments. Ideas such as the Heartbreaker gun, war as something to outsource and a big cat who knows when you're lying. The phrase: 'We've got magic incoming.'
Vaughan brings a script with plenty of colours, nicely paced in its blend of action and character moments. He's matched in craft and style by Fiona Staples, providing full artwork. Every character and setting has a distinctive look and the storytelling is superb; the layouts aren't showy, there are no unnecessary splashes, just page after page of artwork that invites us into the narrative and keeps us there. I particularly like the way Staples translates the beats of Vaughan's script onto the page. And her colouring is very effective, never alien-wacky, 'just' moodily appropriate.
A big hand, too, to letterer Steven Finch for a good-looking, intelligent job (and if he'd like to do something about that snoozer of a logo, I'd be even happier).
The title suggests that we're getting a big story here, and as this opener spans worlds and generations, I'm willing to believe it. Noticing that the first issue is a generous 44 pages of story for $2.99, I thought I'd give it a punt. I'm very glad I did.
I could've lived without robo-buggery, mind ...
Brian K Vaughan Fiona Staples Image Comics Saga #1 review Steven Finch