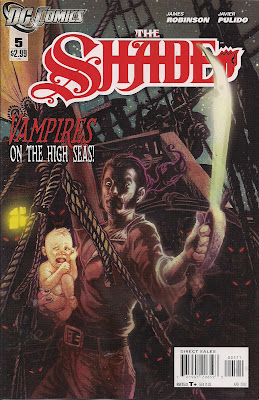 Anyone for a drop of La Sangre? Barcelona's vampire heroine, previously seen in Shade writer James Robinson's underrated Superman run, steals the show in this instalment of the 12-part Starman spin-off. Gentleman thief and occasional hero Richard Caldecott, the Shade, seeks out La Sangre to ask for her help with a family matter. But while she's willing to give it, a more immediate problem shows its ugly head - her arch nemesis, the Inquisitor, is back, and baying for her blood.

It may seem odd that a book with several dark moments left me with a silly grin on my face; the thing is, this comic is delightful. From Robinson's frothy script to Javier Pulido's sprightly art by way of Hilary Sycamore's colours and Todd Klein's letters, I had a ball.

First off, that script. It's blood and blood ties and blood feuds, quests and jests and tests. We learn something new about the Shade's past and nature, and how La Sangre - the happiest vampire you ever did see - came to be. Robinson is a gifted storyteller, tossing his clever little tales at one another and letting them collide and connect in a game of narrative billiards. I can't tell you whether I'm more interested in Darnell Caldecott's search for truth, La Sangre's latest tussle with the Inquisitor or Shade's flashback to an encounter with pirates - all are compelling, in their own way. And I love that in a DC Universe containing a vampire as heroically gloomy as Andrew Bennett - namechecked here - there exists a young woman who uses her dark gifts to be a superhero.

As a Spaniard, Pulido is perfectly placed to present a Barcelona-set tale - you won't be surprised to learn Robinson tailored it to his talents. So we get a pitch perfect depiction of Gaudi's La Padrera building, hero and villain fighting during the Spanish Civil War and a stroll down the more surreal streets of today's Barcelona. Best of all, there's the pixie-ish La Sangre, Little Red Riding Hood with a bit of Bad Wolf in her veins. Pulido also does a fantastic Shade, strikingly handsome in his Mandrake the Magician topper.

And while I'm not a fan of repeated images, there's one spread in here that's so creative, that works so well, that it was awhile before I noticed he'd apparently used the one central image in a dozen different ways. Deadline saver or experiment? I suspect the latter, and if so, it works. 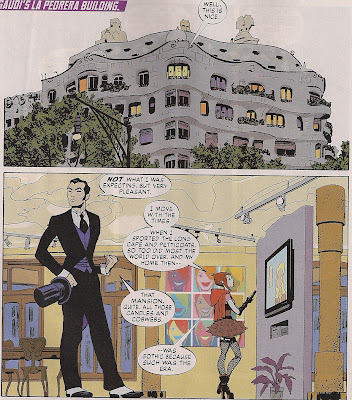 Pulido does great action sequences too, his characters moving with a balletic grace rare on the comics page. And it's all intelligently, beautifully coloured by Sycamore - subdued here, Pop Art bright there - it's unashamed comic book colouring rather than overly modelled attempts at naturalism.

And laying down the lettering is the legendary Todd Klein, master craftsman and cracking cook (I'm not sure a vegetarian should be lettering this issue, but I'll let it go). While Klein never gets showy for the sake of it, if a character suggests a distinctive font treatment he's happy to oblige, and that's what the Inquisitor gets here.

All this, and a killer cover from Tony Harris.