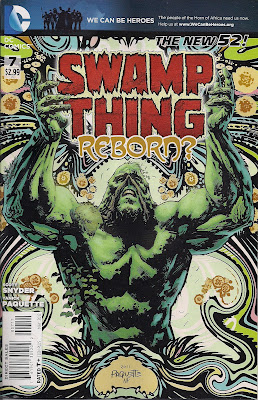 At last. After half a year's worth of Swamp Thing without Swamp Thing, the star of the show steps into the spotlight. It's not a matter of Alec Holland embracing his destiny, so much as making his own future. Here's Alec in a choose-your-own-adventure, with stunning board game layouts from artist Yanick Paquette. The trippy compositions look like the scariest game of Snakes and Ladders ever as Alec and the Parliament of Trees discuss death, and Abby Arcane becomes death. Alec's good looks contrast with the twisted agents of the Rot and the warped beasts who would worship Abby. And as Alec comes to a new understanding of his supposed brethren, the Parliament begins to look as nightmarish as everything else around him.

Almost as scary as the corrupted creations of darkness is the notion that Alec will become the monster that for so long believed it was him. A creature whose memories have been driving him half-mad. But the fact that he's dying helps Alec make his decision. We watch his body transform outwardly, inwardly, on a genetic level, in another memorable vignette from Paquette and colourist Nathan Fairbairn.

And then I cheer, as Alec, for love of Abby, embraces change, becomes a new, more centred Swamp Thing - the green knight needed to take on first the Rot, then the Red. Abby, meanwhile, thinks only of Alec as she morphs into ... what?

Writer Scott Snyder took a risk by making us wait for Swamp Thing's comeback - I dropped several New 52 titles after a single issue - but I'm glad he did. He's let us get to know the man before he becomes the monster, and now we're assured that man and monster are truly one at last. Swamp Thing is made of grass and branches and mulch but he has a heart, a soul. Real humanity rather than a fading copy.

And I'm more excited than ever to see where this book goes next. Hopefully the Rot and Red storylines will be over by the end of the first year and new horrors will emerge. And maybe even a few delights. So long as Snyder and Paquette are guiding Alec and friends, I'll be there.
Nathan Fairbairn Scott Snyder Swamp Thing #7 review Yanick Paquette