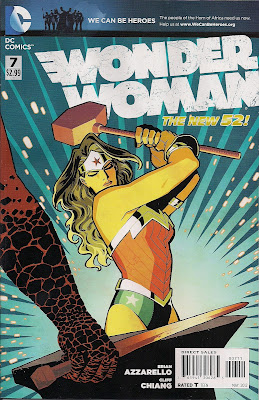 If you've no attachment to the Wonder Woman legend, I can see that this comic could go down well. It's full of relationships that get more interesting by the page, clever moments of action and unexpected revelations.

As a longtime fan of Diana, I enjoyed the introduction of two more of her relatives, Eros, a love god by way of La Dolce Vita and 100 Bullets, and Hephaestus, beastly-looking blacksmith to the gods, arms like Ben Grimm with sunburn. I loved that Diana showed the smith that she doesn't need a deadlier version of her magic lariat, and his later assertion of how its truth abilities work (I'm not saying that I believe them!). I liked the battle with a lava lizard sent by Hades, and Diana's attempt to inspire a revolt among those she sees as oppressed workers.

But would someone please introduce writer Brian Azzarello to the work of Wonder Woman creators William Moulton Marston and Harry Peter? I'm not meaning the bondage business, just the nature of the Amazons. They're warriors, yes, but they're fighting for love. They want to enlighten the world, spread the message of goodness.

They don't, oh, let's take something off the top of my head, seduce sailors for sperm (insert your own seamen/semen gag), turn them into empty husks, then throw them into the sea. They don't, nine months later, swap any newborn boys to Hephaestus in return for weapons.

I get that Azzarello pitched his Wonder Woman run as a horror story. This take on the Amazons fits right in with such an approach, But it's just not an approach that should be used for Wonder Woman's sisters - they're supposed to be the good guys, but here they're monsters. Succubi.

We only have Hephaestus' word for it that this is how things go down, but there's no feeling that he's being duplicitous, and he certainly has a very grateful gang of likely male Amazons working for him. The revelation really soured the first issue I was properly enjoying in ages; it's bad enough that Diana is related to scumbug gods without the other side of the family being beyond vile too.

Back to the good stuff. I like Eros, he's entertainingly Italian. I like Hephaestus, because he saves orphan kids. I like that Diana is smiling here, that she has an easy confidence rather than unearned arrogance. I like that we learn something of the source of Lennox's knowledge. There really is a lot of good craft on display in Azzarello's script - Hephaestus would be proud. 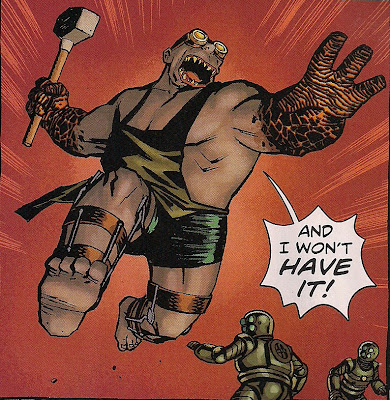 And the artwork of illustrator Cliff Chiang and colourist Matthew Wilson is exemplary, taking us through the story step by good-looking step. Their newest creations, Hephaestus and Eros, fit into this world of ever-surprising god forms, while the lava monster is a hoot and the (reviving a horrible old term, here) Manazons look great in and out of their workwear. And Chiang's cover is a beaut.

I just wish this creative team wouldn't twist Wonder Woman's world quite so much as they're attempting to redefine her for a new century.