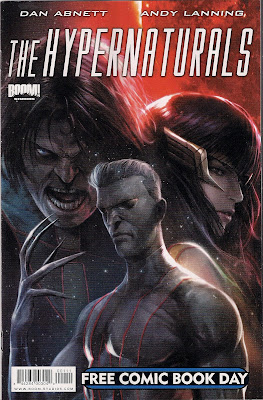 Having served a long tour as Marvel's masters of the cosmic, writers Dan Abnett & Andy Lanning fetch up at Boom! Studios for a new superhero sci-fi series. We're in the 100th year of the Quantinuum and Earth's greatest heroes, the Hypernaturals, are in their 21st iteration. Sent to investigate a cosmic storm threatening the 1.7 billion strong colony of 28 Kosov, they're an impressive bunch. 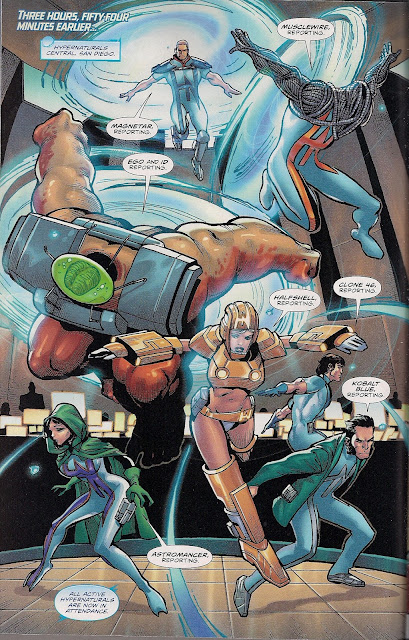 On emerging from the 'trip' teleporter onto 28 Kosov, their communication system for reporting back to Earth dies, and Astromancer begins seeing something, a presence that's here, then not. Leader Magnetar is doubtful, but Halfshell knows to trust her colleague, and flies off to investigate. Something grabs the semi-cyborg, prompts her to tell her teammates to kill her. Then everything goes black.

Back on Earth, retired members of the Hypernaturals learn of their successors' missing status. There's Clone 45, who spends his days getting drunk. Thinkwell, brainiac turned academic. Prismatica, heroine turned mom. And Creena Hersh, Hypernaturals media liaison and Magnetar's lover. Somehow, I think the band is getting back together.

Well, three of these guys are on the cover ...

I hope that some of the current gang do make it back to Earth, as their designs alone make me want to know more about them. Tom Derenick draws 'em big and bold and full of potential. Brad Walker and Mark Irwin, meanwhile, handle the scenes featuring the veterans, bringing a certain world weariness that contrasts with the gung-ho feel of the rest of the book.

Abnett & Lanning bring their skill with team books - honed on the likes of the Legion of Super-Heroes and Guardians of the Galaxy - to the job, providing a pacy start to proceedings. The chunks of backstory are easily digestible, never slowing the narrative, and they make one of my bugbears, the back and forth narrative ('Four hours earlier...'; 'Now...'; 'Three hours, fifty-four minutes earlier ...'; 'Now ...'), bearable. And crucially, their dialogue is first class.

The cover, by Francesco Mattino, is excellently rendered, if a little too 'SF mystery' for my tastes. This is an SF mystery, but it's also a superhero book, and I'd prefer a more Atari Force style.