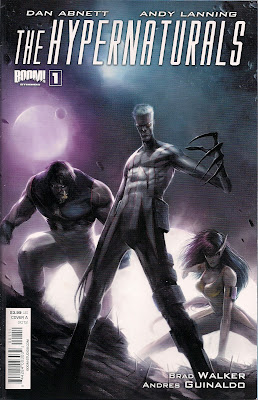 The Hypernaturals are the Quantinuum's protectors. The team has existed, with various line-ups, for 100 years, but the latest version - the 21st - has vanished on their debut mission. Can former members Bewilder and Thinkwell, and new kids Shoal and Halfshell, find them ... and the billions of ordinary people they teleported across space to save?

Dan Abnett, Andy Lanning and Brad Walker's sci-fi super-team concept debuted with a zero issue on Free Comics Day earlier this year, but if you've not read that, dive right in anyway. They couldn't make it any easier, presenting not just an engrossing story, but prefacing it with background material and supplementing it with a magazine-style focus on Bewilder. There are even a couple of in-world adverts to add texture.

The name doesn't give much away, but Bewilder has a super-speed power. And if you want fast, by the end of this issue writers Abnett and Lanning have already gifted her more depth than you see in creations who've been around for years. The other leads get less focus, which makes sense - sharing out the spotlight across a few issues ensures it doesn't become dissipated. I certainly got enough of the other Hypernaturals to care what happens to them, and I'm looking forward to a couple of other retired members signing back on - Clone 45, who's fallen on hard times, and Prismatica, whose partner was killed by the villain, Sublime.

Ah yes, Sublime. With his 'class thirteen hyper intellect' he surpasses Brainiac 5 from DC's Legion of Super-Heroes, which is likely former LSH scribes Abnett and Lanning 'aving a larf. We meet him in flashback, bidding to end the age of the Quantinuum, the artificial intelligence running not just the Hypernaturals, but human culture throughout the galaxy. It seems to be a benevolent partner for Man, but who knows, perhaps it's actually holding 'us' back.

That's a question for future issues. This one is concerned with world and character building. And the designs of Brad Walker pull their weight in this department. The heroes are different enough to look new, but familiar enough so as not to distance us - the most unusual in appearance is Thinkwell, with his deathly pale skin, cold eyes and mental ink dripping complicated equations from long fingers. But his dialogue and actions tell us that Poul Indersun (presumably a tribute to SF writer Poul Anderson - sadly, I'm not well read enough in the genre to pick up on similar tributes here) is a good egg. Refreshingly, a conversation with Bewilder, aka Creena Hersh, demonstrates that unlike other SF geniuses (Mr Spock, the aforementioned Brainiac 5), he understands human relations well enough.

Bewilder looks like the kind of hero Alans Moore and Davis might have come up with for the Special Executive - there's a real vibrancy to her appearance. Halfshell's armour is amusingly clunky, while Shoal (below right) reminds me of onetime Legion member Gear (left), but with a reversed haircut. And don't tell me that's not the Legion 'L' in Interlac on his sweatshirt before he dons the (rather ugly) team suit! 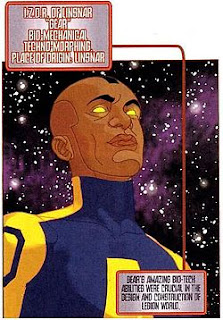 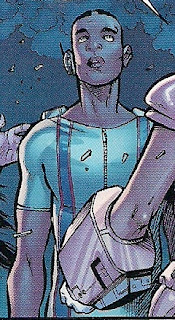 Another Legion link? Well, here's one more - sharing the pencils with Walker is Andres Guinaldo, who also pops up in the latest Legion of Super-Heroes. Guinaldo, working with Mark Irwin and Mariano Taibo, draws most of the issue, but his style meshes well with Walker's. Not knowing the breakdown of work, I'll simply say that all the illustrators keep the story moving with pep and personality.

But none of them draw the cover - that's Francesco Mattina, and it's very nicely crafted, if not representative of the art style inside. Other covers are available ...

With such an assured, entertaining debut, the Hypernaturals more than earns its place on the crowded shelves. It's from Boom! Studios and definitely worth a look.
Andres Guinaldo Andy Lanning Brad Walker Dan Abnett Legion of Super-Heroes Mariano Taibo Mark Irwin The Hypernaturals #1 review