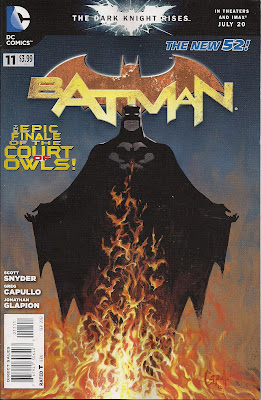 It's Batman vs Owlman in the finale to the Court of Owls storyline. Lincoln March, now claiming to be Thomas Wayne Jr, snares Batman and drags him into the sky to show off his version of Gotham - a twisted reflection of the one Bruce Wayne knows.

I didn't half enjoy Owlman's oration as he flies across the city with Batman. He goes on and on and on; about his tragic childhood, how the Court saved him, his plans, his devotion to dachshunds (I may have made one of these up) ... it's like he's trying to talk Batman to death. I bet that under that owl mask he's twirling a mustache. Owlman's notion that his city is a skewed mirror image of the one Batman knows, because he saw Gotham reflected in a skyscraper, makes no sense unless said building was lined with funhouse glass. 'Reversed and unnatural'? Er no, just reflected, and everyone gets that view at times. Try looking to the sides of the building, kid.

And his claim that he felt trapped in Gotham because the position of airport runways in relation to Willowwood Hospital meant he never heard planes leaving is desperately tenuous.

Still, this is big, daft melodrama and Owlman is the lead nutter. No doubt giggling as he types, writer Scott Snyder gives us a close-up of Owlman's psyche, positioning him for his inevitable return.


There's Sixties-style daftness, too, as Batman plunges to certain death at one point. What can he do but yell: 'Switch to high-velocity bat-rope, NOW!' 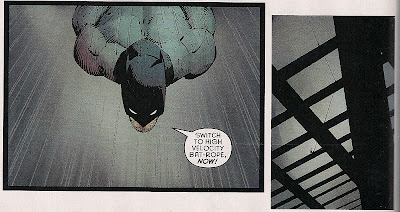 And lo and behold, stiff rope appears to save him. What is switching to high-velocity bat-rope, I have no idea. Anti-mechanical shark repellant, maybe. Anyway, it's another example of Snyder putting Batman into an unwinnable situation and basically magicking him out of it - see also his rallying in the Court's labyrinth back in issue #6.

Much as I enjoyed the flight over Gotham, my favourite moments come with Bruce and Dick's chat at the end. It leads to one of those touching rapprochements we get every few years in which, after a bit of a falling out, the two men show what they mean to one another - Bruce with tender words, Dick with japes.

Greg Capullo's pencils are superb, capturing the intensity of the conflict between the Bat and the Owl, the grandeur of Gotham's manmade canyons and the awful prospect of death by jet engine. It's a shame March's owl mask, and the cloth number below it, prevent Capullo from showing us his expressions as he's speechifying, I don't doubt they'd add to the drama. The quieter moments with Dick are effective too, as the men talk, surrounded by the ghosts of Wayne Manor.

Working with Capullo, inker Jonathan Glapion and colourist FCO Plascencia add light, shade and tone - this story is going to make a very good-looking collected edition. It's as if the artists have absorbed the craftsmen who've come before them to produce their own version that honours their forebears. There's a bit of Mazzuchelli in the opening punch-up, some Aparo around Bruce's eyes ... yet there's no sense that the stripwork is just a series of homages, everything blends beautifully.

Capullo's cover is a keeper too, and the image actually works with that usually-intrusive movie ad.

The back-up strip shows us the fate of Jarvis Pennyworth, Alfred's father and the Wayne butler when Bruce was a child and Martha's car smash robbed Thomas Wayne Jr of the life he might have had. We see that Alfred has no interest in irrefutable answers as to his father's demise, while a line or two from Jarvis leaves a lingering doubt as to what really happened to the lost child.

Working with James Tynion IV, Snyder delivers a tight conclusion to 'The Fall of the House of Wayne', while illustrator Rafael Albuquerque and colourist Dave McCaig produce pages that are intense and contemplative by turns. And Alfred looks delightfully pimp.

So it's goodbye to Owlman and the Court of Owls. After almost a year's worth of storyline, I hope they'll stay put in the Wayne Manor barn (of course there's a Wayne Manor barn) for a good while without popping their beaks out. Of course, they'll appear in the upcoming Talon/Demented Chicken title, and there's an epilogue in Batman #12, but the main Bat-books should focus on other challenges for awhile.