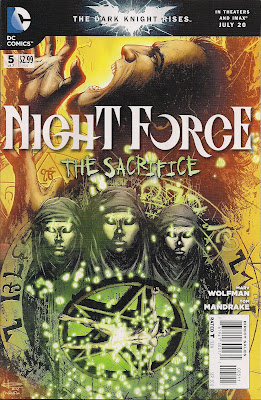 One of the most-ignored DC comics around, this is also one of the best, as Marv Wolfman and Tom Mandrake produce a horror story that never fails to grip.

The seven-issue mini-series has the enigmatic Baron Winters gathering ordinary people to thwart an occult threat to the USA.

That's the idea, anyway. By the end of this chapter his two chosen, Jim Duffy and Zoe Davis, are in serious trouble. Both consider Winters a dangerous kook, but he's dragged them into his ambit because they were already embroiled in gruesome events without knowing it - he's opening their eyes and giving them a chance to save themselves as they right the situation.

Cop Jim is investigating a cult that for centuries has been kidnapping women to breed ever more psychic children, wiping their memories after they give birth and placing the babies with new mothers. Decades before, Jim's father was investigating the cult's business, and it led to his awful death. Today, the cult is on the verge of getting a 'Generation 9', Senator Brian Greene, into the White House, and they're willing to sacrifice over 100 of their 'Dormants' to do it.

Like her mother, Zoe is at both ends of the insidious equation, having been born of the plot, and herself had a child without recalling she was ever pregnant. Supposedly safe in Winters' mystic mansion, she's being stalked by one of the Cult's hideous 'Harvesters'.

Meanwhile (sort of), Winters and his pet leopard have been tossed into a 17th-century London dungeon by the cult's enforcer, Simon the Gatherer.

As well as the regulars, we see one of the cult's victims kidnapped from a funfair in a sequence that knows most of us find clowns and smiley Furries pant-wettingly creepy.

Wolfman is among the most elegant and erudite of writers, and not afraid to be unfashionable; not for him, the treatment of comics as film storyboards. Nope, he gives us full-on narration in the opening scenes, laying down an atmosphere of foreboding in both the 17th and 21st centuries. He knows how to balance description and dialogue. His storyline is strong, his pacing perfect and there's not a person in this comic who doesn't show a bit of personality. And while the overall tone is dark, there's humour in the Cult's treatment of world domination as a business plan ('We're behind projections, but we can catch up if we can birth four more 10s this quarter'). I truly hope that somewhere, Wolfman is teaching classes to comic writers of the future. 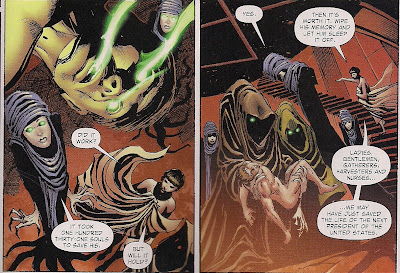 Mandrake is magical, interpreting the script with natural talent and a veteran's skill. He ekes out all the drama in the forefront of the script without skimping on backgrounds or incidental detail. Plus, he makes the good guys sympathetic and the bad guys - both human and creature - equally horrific in their own ways. Wes Hartman's colours are exemplary, always adding to the art, emphasising mood and incident, while Wes Abbott sets things right with his lettering.

Add in a superbly composed and rendered cover by Leonardo Manco and you've a cracking package for just $2.99. I doubt comic shops ordered highly enough that you'll find back issues, but there's always digital (with a dollar off, to boot). If you enjoy creepy comics, give this a look. Maybe even give that stranger behind you a read, too. You know, the one in the robe, with the lizardy skin and big teeth ...
Baron Winters Leonardo Manco Marv Wolfman Night Force #5 review Tom Mandrake Wes Abbott Wes Hartman