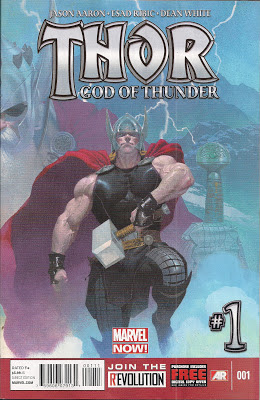 A millennium past, young Thor feasts and carouses after saving a village in Iceland from Frost Giants. A mutilated corpse washes up on the shore - the body of a Native American god.

Today, Thor brings rain to the planet Indigarr, having been summoned by a child's prayer. Hearing that the world's own deities have long vanished, he investigates their dead realm. There he finds an entire pantheon, rotting on butchers' hooks - and the pet of the monster behind the considered carnage.

In the far future, the elderly God of Thunder is the last of his kind. Lonely and tired, he would welcome death, but that doesn't mean he's going to fall down before the beasts that assail Asgard - the hellhounds of Gorr the God Butcher.

>Phew< You can't fault writer Jason Aaron for lack of ambition, when his debut on this Marvel Now! relaunch spans the ages and spaceways, and Thor himself shows several sides - warrior, big brother ... even detective. There's plenty of interest in his triptych of tales, as dark drama is leavened with humour. The changes in Thor's narration as he moves from ebullient youth to god in his prime to elder deity are subtle, yet distinct. And the mood of foreboding is strong. 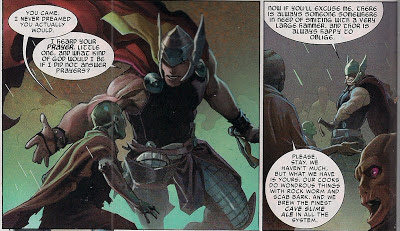 Said mood is enriched by the atmospheric artwork of Esad Ribic; don't let the unintentionally comedic cover pose fool you, there's some sterling work in here (click on image to enlarge). Even the beyond boring costume, boasting not a sniff of Kirby bling, looks better inside, while the past and future variations are perfect. Ribic proves adept at presenting not only a Dark Ages Iceland, but a cosmic fortress and a palace in a ruined Asgard - it'll be interesting to see what he comes up with should Aaron actually place Thor on contemporary Earth. And good on Ribic for not eschewing sound effects - Dean White's masterful colour job means the overall effect is painterly, but this is still a superheroic comic book, and rightly unashamed of the fact.

And let's give a shout-out to letterer Joe Sabino, who gives the tri-period narrative boxes individual treatments (insert my usual complaint about the annoying, unnecessary 'god font' for Thor's 'voice' here).

Thor relaunches seem to be an annual event these days, but if this latest series fulfils the promise shown by this beginning, this run deserves to be around for awhile.
Dean White Esad Ribic Jason Aaron Joe Sabino Marvel NOW Thor #1 review