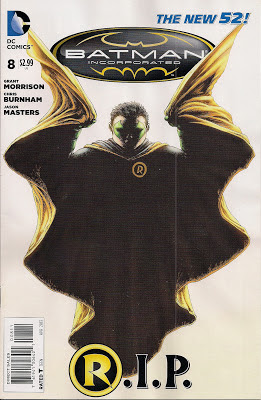 I think I'm safe to assume anyone reading this knows what happens this issue, DC having self-spoiled to the media a couple of days back. And if you hadn't heard, I hope Chris Burnham's cover here - don't look! - gets the message across in a darkly elegant manner.

Damian Wayne dies, slaughtered by his own clone during mother Talia al-Ghul's assault on Gotham city. 'Big brothers' Nightwing and Red Robin are unconscious across the lobby of Wayne Enterprises, so can't help. His father is fighting for his own life across the city. Batman Inc's other agents are scattered around Gotham, dealing with the brainwashed hordes of Talia's Leviathan organisation.

But Damian's courageous fall is witnessed. Wayne employee Ellie, whom he's been defending, watches in horror as the other Damian - aged to adulthood as the younger was advanced by around five years - runs his parent/brother through. Damian saves everyone, destroying the 'world bomb trigger' with his crossbow bolts, but it's the witnessing of one woman that brings the tragedy home. Here we have a ten-old kid, fighting a grown version of himself for the life he might yet have. Damian, the cockiest Robin of them all, begs the mother he knows will be observing, to 'call off your monster', but if she hears, she's too tied up with Batman to even consider the request.

So Damian becomes the second Robin to be slain, following Jason Todd.

Which may prompt regular readers to rightly ask: 'So?' As well as being a Wayne, Damian is an al-Ghul, a creation of super-science. His grandfather, Ra's al-Ghul, guards the mysterious Lazarus Pit, which can bring the dead back to life. Bludgeoned to death by the Joker and caught in an explosion, Jason was placed in the pit by Damian's own mother. Damian was fighting alongside Jason - now going by Red Hood - only hours before his demise.

So while it upsets me to see a tiny child brutalised and skewered while pleading for his life, it's extremely difficult to care beyond the immediate moment, to believe the killing will 'take'. Heck, it's a (boy) wonder he actually died, given how much punishment his father can take - it's not long since an exhausted, drug-crazed Batman had this experience in Scott Snyder's Owls storyline over in Batman #5. 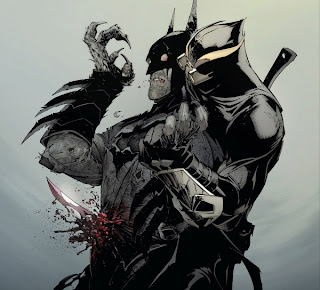 I've heard some readers defend Batman surviving evisceration by 'explaining' that the hero imagined it while drugged. Even if I accepted that, the Batman Inc storyline is firmly set in a world which has seen members of Damian's family return from the dead. So I don't believe that our little Robin will remain with the 'bleedin' choir invisible'. I don't believe writer Grant Morrison would waste a character he's invested so much effort in, having taken Damian from hateful brat to massively popular hero without changing his character. I fully expect Damian to be hale and hearty once more by the close of Morrison's run (and likely the series).

In the meantime, I'm fine with Morrison and his fellow DC writers squeezing every last bit of angst out of Damian's death. It's happened, so we may as well have the dramatics. I'm not fine with DC spoiling the experience of Damian's fans, the readers who've spent hard-earned cash and several years on following his progress, for the sake of a few column inches in the likes of the New York Post. Do newspaper readers really care? I'd wager not, but if they have to be told of fictional events, why not wait a day or two until the comic is actually out? The book's meant to be on sale for a month, if a buzz builds, people can buy it anytime after today - it's a great opportunity to grow the online side of DC's business.

Plus, I trust Morrison enough to expect Damian's demise to have an important role in the storyline, yet the marketing makes it impossible to read this issue as anything other than a stunt comic.

But enough of the death. What else happened? The ongoing Leviathan plotline shambles along - I've long since forgotten what Talia's plan actually is, with the last few issues being big daft crowd scenes, spiced up with the death of another character I like. But there's a wonderful scene between Nightwing and Robin emphasising the relationship they built up when Dick filled in as Batman and Damian was his Robin. Talia and Batman bicker over a radio. Damian flies through Gotham in a mechanical suit. Man-Bats. And Red Robin fights a mop. Oh all right, he does more than take on a cleaning implement, battling a gang of assassins with one of those giant penny souvenirs Batman obviously bulk manufactures, but it made me laugh.

Regular illustrator Chris Burnham doesn't do the whole book, Jason Masters fills in on pages 6-9, the Red Robin sequence. I like what Masters gives us for the most part, the players look good - especially Ellie, who has more character than the average bit-part player - and the art is open, kinetic and sharp of finish. Red Robin's exit from the issue is rather too understated, though, it took me several passes to see what happened to him. And a gob-kicking sequence results in too much streaming blood on the page - but perhaps that was in the script.

I appreciate that Burnham is one of the few artists who remembers that Damian is a small boy, making his murder more horrible than if one of the pencillers who depict him as a muscular teen were on the book. It should be horrible. And it is horrible, even as Burnham puts Damian in deep shadow and colourist Nathan Fairbairn takes a step away from naturalism with a panel filled with blood red and intense orange. And the pages leading up to it are equally nasty, despite the use of tiny panels featuring teeny figures - the intent may be to mitigate the ugliness of what's occuring, but mini-panels mean many more panels of bloody bone smashing.

Plus, Ellie turns into a teeny-weeny doll child in several panels; it's distinctly odd.

Letterer Taylor Esposito chooses his fonts intelligently, varying size, slant and emphasis according to the desired 'voice' - while today's computer fonts may have lessened the art and graft of lettering, there's still a place for heart and craft.

Despite the talent involved, despite some good moments, this comic doesn't rise much above the decent. There's a marquee death, but real world decisions make it seem more cynical than it likely is. And that's a shame - Damian Wayne deserves better.