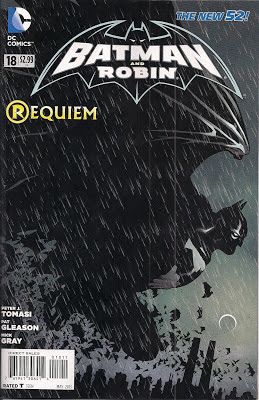 Damian Wayne is dead, at the hands of an assassin sent by his own mother. Batman is without his Robin, but worse, Bruce Wayne is without his son. Their time together was short, but if there was any doubt it mattered, this Requiem-branded issue of Batman and Robin puts them to rest. Writer Peter J Tomasi and artists Patrick Gleason and Mick Gray convey the breadth of Bruce's feelings as he spends an evening in Wayne Manor and on the streets of Gotham, sometime haunted, sometimes comforted, by the memory of the brat who became a hero.


And the creators do it without a single line of dialogue, a solitary narrative box. For the first time ever, I find myself loving a silent issue. Perhaps it's because for once, the choice isn't a gimmick, it makes sense. What do you say when you lose someone you love? Sometimes you don't wish to speak, sometimes you can't speak. Luckily for Bruce, he has Alfred Pennyworth around, the man who, after a very sticky start, Damian came to love. The pair can't console one another in any dramatic way, but they can just be, and that can be enough.

Out in the city, in costume as the Batman, despair turns to rage and the underworld feels his wrath. It's only later, back at the manor, that Bruce accepts the warmth of another soul, someone who misses Damian too.

Batman and Robin #18 is a virtuoso performance from Tomasi and co, as they build a picture of love and loss via a combination of small and big moments. The saddest is the family portrait begun months ago, which returns like a punch to the gut. Then there's Clark Kent's list of recommended films to entertain and inspire Damian; the sketchpad that bears witness to a talented young artist; the massive 'bouquet' of crooks delivered to Gotham PD; the Batmobile slammed into a lamppost.

It's that lamppost that features in my favourite image, Batman sitting atop the structure, alone in the night. It's just one of a series of splashes and panels that build the larger picture. Gleason's pencils and Gray's inks have never looked better, bringing us the emotional aftermath of the awful killing of Damian in last month's Batman Inc #8. The intelligent, sensitive colour choices and applications of John Kalisz underline the feelings, whether it's Bruce lit by the fire in his study, or the gloom of the Gotham night 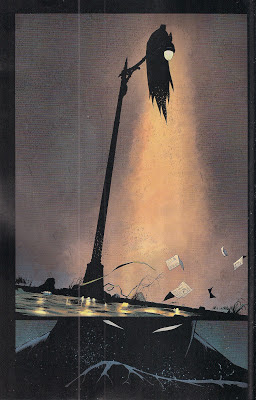 I can count the Batman stories that have moved me on the fingers of one hand - 'There is no hope in Crime Alley'; 'Night of passion, night of fear'; 'Interlude on Earth 2'; 'To kill a legend'. With Batman and Robin #18's 'Undone', we can add one more to the list. Tomasi, Gleason and co have done Damian Wayne proud.
Batman and Robin #18 review Damian Wayne John Kalisz Mick Gray Patrick Gleason Peter J Tomasi