Writer Scott Lobdell has huge fun with this scene, as Man of Steel confronts interstellar Romans, even down to naming their 'Solaratrix' Allysun. It's cornball, but presented with such a straight face the Lobdell gets away with it, while showing us that Superman's wits are as important as his powers. And artist Kenneth Rocafort's designs are splendid, with the soldiers looking regal and their leaderene like some ancient sun goddess. I'll be disappointed if we don't see this bunch again, especially as, unlike Superman, we don't get a peek inside their wacky craft, a cross between a spaceship and a Classical palace.

Back on Earth, Clark Kent is late for Lois Lane's flatwarming party, but date Diana Prince is on time, and it's safe to say she impresses everyone with her regal bearing and looks. She's anything but snooty and arrogant, though, mixing well with the Daily Planet staff, especially old smoothie Perry White (click on image to enlarge). They display more chemistry in one panel than Superman and Wonder Woman have shown in a host of appearances - anyone for a Prince/White fling?

Clark arrives, to be greeted by a vision of Lois opening the door dressed as Wonder Woman, then Lois as herself, gushing about how much she loves Clark. Inside, there's more surprising behaviour as people either lose control of their 'inside voice; or say things they don't mean.

Clark gets that there's likely mind control going on - and that's without knowing that mad mentalist Hector Hammond is across town at STAR Labs - but he's unable to think clearly enough, for long enough, to work out who may be behind it. And just as he's about to kiss Diana he's grabbed from Lois's balcony and thrown into Hob's Bay by Orion, who's looking to pound Superman into paste.

Which should make for a fun issue next month. This month's instalment of the New 52 adventures of Superman is certainly a delight, the best issue since Lobdell and Rocafort joined the book. Superman comes across as the wise, experienced hero he should be, not a god but certainly able to deal with everyday space invaders, even ones who should have him at a disadvantage. Clark has none of the cockiness he's occasionally displayed over the last year and a half; indeed, he's rather humble in how he thinks of his non-romance with Lois - he's dating a demigod but it's the regular woman who's the unattainable mystery. The dialogue sparkles throughout, with my favourite scene being the aforementioned encounter between Diana Prince and Perry White - I do hope this is the real Perry, and not a Hammonded version.

Intriguingly, there are strong hints not only that Jimmy sees straight through Diana's Clark-inspired secret ID, but that Perry has known Clark was Superman since the day they met. And there's a pleasing moment as Lois addresses her return to reporter status after a period as TV news producer. Plus, more confirmation that while Clark's dating Diana, it's Lois he loves (call him not caddish, but confused), and perhaps confirmation that Lois feels the same way about Clark. Let's not write off a romance just yet ...

And let's not scare the horses, but Clark is actually seen buying alcohol! It's almost as if he's finally being allowed to be a normal adult.

The only thing about the script that saddens me is the lack of Cat Grant, recently treated with disappointing disdain by Clark - hopefully Lobdell will address that soon. 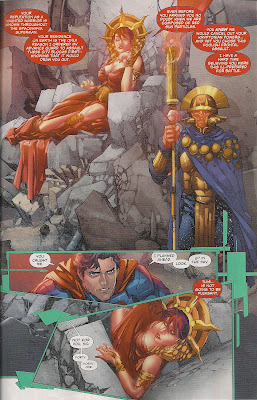 Rocafort's art is as breezy as Lodbell's script, especially in the moment Clark sees Lois as a fancy dress Diana, all winks and patriotic starbursts. There's another standout image as Superman becomes Clark and we see him altering his hair - I love that Rocafort draws our hero in classic style, rather than as the Harry Potter wannabe of recent Action Comics. I've already praised his Sunturians, but I should mention Allysun's wonderfully bored expression, it's pure Flash Gordon space princess. And Clark's co-workers - Lois, Jimmy and Perry - all look great, while Lois's boyfriend Jonathon looks to be a nice guy rather than some stereotyped romance interloper.

Aiding the overall look is colourist Blond, who is refreshingly unafraid of using rich hues, and knows how to apply highlights for make-up and specs without going over the top. And Rob Leigh's letters speed things along nicely.

Simply put, this is the most enjoyable issue of Superman since the New 52 began. If Lobdell and Rocafort keep the inter-title crossovers at bay, and concentrate on the world of Superman and Clark, we may have a longterm winner.
Blond Diana Prince Jimmy Olsen Kenneth Rocafort Lois Lane New Gods Orion Perry White Rob Leigh Scott Lobdell Sunturians Superman #19 review Wonder Woman