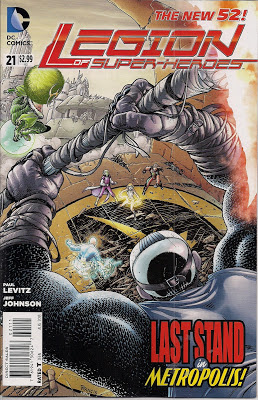 There's a real sense of doom around current Legion issues. It's not just that the 31st century universe is being torn apart by the Fatal Five, it's the real-world knowledge that an end is coming. That the series is being cancelled in a couple of months, to be replaced by a future Justice League series. Yes, that may turn out to be a backdoor Legion revival, but at the moment everything feels so depressing.

This issue doesn't help, with relentless setbacks for the Legion throughout. We begin with Duplicate Damsel apparently dead at the hands of the Persuader, motivating a brutal battle with Ultra Boy and Chameleon Boy. They're joined by other Legionnaires and look to have the advantage, until Persuader's fellow Fatal Five members Tharok and Emerald Empress arrive. The three bring Metropolis around our heroes' ears.

Along the way there are prophecies of doom from Dream Girl and the (supposed) ghosts of Ferro Lad and Earth Man. Legion leader Phantom Girl is a no-show, having fled to her home dimension. White Witch, Blok and Glorith aren't seen either. The only moments of hope come as Chemical Kid reveals he may be able to help Mon-El, dying after battling the Empress, and at the very end, as Legion veterans Saturn Girl and Lightning Lad arrive.

There's a touching show of faith in Phantom Girl from longtime love Ultra Boy, one the Persuader is delighted to dash - Jo just knows she'll turn up with a plan, but his enemy jeers, says she's gone. Me, I reckon she'll turn up and save the day before the end - writer Paul Levitz isn't going to let one of his - and the readers' - favourite Legionnaires become a figure of shame.

This is a busy issue, but it all feels like padding. Lots of fights. Lots of foreboding. Precious little in the way of  planning or teamwork from the Legion - at one point we have nine Legionnaires vs three villains, but the bad guys have them totally on the backfoot. A couple of months back the Empress was encased in intertron - the future's strongest material - by Element Lad, but her escape is simply waved away. We still don't know who the current Fatal Five's fifth member is. There's no grand plan from resident super-genius Brainiac 5. There's not even a simple pile-on, with one-on-one attacks followed by speeches which give the villains time to regroup. It's a shabby showing all-round.

There may be something coming from Brainy - at the start of the issue he seems to have two ideas, one of which is likely the summoning of Saturn Girl and Lightning Lad. I only hope this is actual set-up from Levitz, rather than a red herring en route to a humiliating defeat. 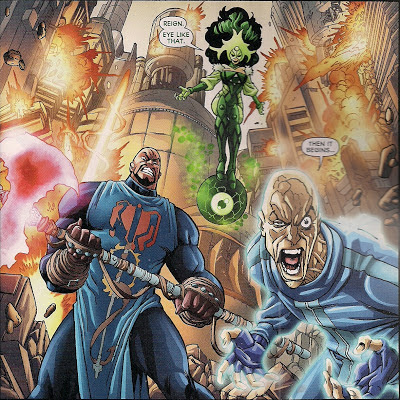 Jeff Johnson's art is effective in the big fight scenes - that's most of the issue - especially when the Fatal Three show up. Occasional facial expressions are a tad wonky, but marks for trying to convey big emotions. Javier Mena's colours are as vibrant as ever, while Dezi Sienty's lettering is unshowy, but does the job.

The excellent Francis Portela's cover is an interesting composition, but figures are either too big or too small to make an impact - the Empress is so squeezed into the corner that she looks like an elf, the Persuader's USP axe is hidden by the logo and the Legionnaires are barely there.

Two issues to go. I really hope Levitz and co pull something amazing out of the bag, so the Legion book can go out in a blaze of glory. And  that means life, and victory, not darkness and death.
Dezi Sienty Fatal Five Francis Portela Javier Mena Jeff Johnson Legion of Super-Heroes #21 review Paul Levitz