A difference of opinion is at the centre of this issue. Dr Light has died after being blasted by Superman's heat vision. Wonder Woman believes his contact with Pandora's Box is to blame. Batman fears the legendary vessel is too dangerous to go after, on the word of mystery man the Phantom Stranger and former League handler Steve Trevor.

Batman threatens Wonder Woman when she goes to the Dark team for their mystical expertise, and Diana bites back. Before an all-out fight breaks out, new Justice League member Zatanna fades out with Wonder Woman and her allies - Stargirl 'defects' from the JLA, and wild card former JLD member Black Orchid tags along too.

Meanwhile, back at the government's ARGUS complex, the Question has helped Superman get out of his containment cell and seeded the idea that mind-controlling midget Dr Psycho is behind his troubles. Superman is determined to investigate first hand, despite another flare-up of his power. He's a living weapon, someone else obviously has access to his brain, but he wants to get back out there in the world ... not too bright. But off he goes, with Cyborg and J'onn J'onnz at his side, and Green Arrow and Element Woman soon following. Then Firestorm leaves Amanda Waller behind too, though it may be that he's off to stand by with his newfound capacity for kryptonite creation.

John Constantine takes Shazam off to 'save the day' although Billy just wants to get away from the madness, and Phantom Stranger is off to look for Dr Light's soul.

So here's part three of The Trinity War and it's classic, cliched crossover stuff, with forced confrontations, snarling and posturing. Batman worries about what will happen if Diana and co find Pandora's Box. Diana points out the oddness of Batman's position.

Here we have the perfect excuse for the three Justice Leagues on hand - Original, Dark and Hazelnut, sorry, America - to split into groups and tackle the problem from various angles. Batman, bless him, does want to sit down and share information, marshall their resources, but having arrived at the House of Mystery in threatening mode, he's put Diana on the defensive. Even the usually measured Zatanna has a moment of nonsense dialogue, as she forgets that apart from John Constantine, her former associates in Justice League Dark are good folk. 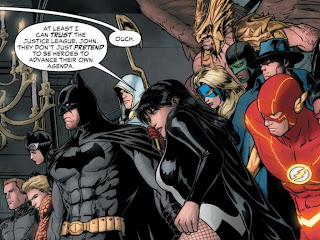 I find it hard to believe that a writer with Jeff Lemire's experience can't keep a crossover moving without resort to artificial dramatics, so perhaps something else is at play here. An empath, maybe, fanning the emotions. Certainly The Outsider, frontman for the Secret Society of Super-Villains, tells the kidnapped Madame Xanadu that there's a mole in the heroes' house. We shall see. Right now, though, it's annoying to see so much mistrust among the teams - we're at least five years past the idiot Justice League seen at the start of the New 52, but they're back to acting like stroppy toddlers.

The Outsider talks of the heroes as chess pieces being moved around the board, and there's certainly a sense of that. So it is that Batman won't take new Leaguers Element Woman, Firestorm and the Atom along on his mission to stop Wonder Woman because 'they are not ready for this'. In which case, why are they in the Justice League? He also tells Cyborg to hang back at ARGUS, maintaining the now traditional benching of a character who was once a fan favourite.

One thing I'd like to see is more speaking parts for the heroes - there's a lot of huddling and only the main players get more than the odd line, if that; the JL characters are strong personalities, let's hear  more opinions! The Flash, in particular, should get some play on the Superman question, being a crime scene investigator, but unless I missed something, he gets just two words in edgeways.

The book ends with directions to part 4 in JLA #7 and side stories in Constantine and Phantom Stranger - so much for this tale being contained in the three League books.

The best reason to buy this issue is the artwork of Mikel Janin, which is simply superb. The staging of scenes, the wrangling of characters, the emotions, the effects - it's all first-rate work from probably the most consistent artistic presence at DC comics. Standout moments include the arrival of the Phantom Stranger, the splashes of gathered heroes, the portrayal of a fast-failing Superman and the final image, in which the 'camera' pulls back on Madame Xanadu and the Outsider - in full spidery Richard III mode - to make room for a falling house of tarot cards. The angle, the shadows, the symbolism, it all makes for a suitably dramatic close to the issue. As Janin is Spanish, he gets a pass on the misspelling of 'magnate' as 'magnet' in a newspaper, but someone on the editorial team should have spotted it. Still, these things happen, here's hoping editors Kate Stewart and Brian Cunningham sort it for the collection.

Janin's artistic associates, Jeromy Cox on colours and Carlos M Mangual on letters, both contribute to the visual success of the comic - Cox ups the drama throughout with his passionate palette, and ensures the coven of costumes and characters avoid becoming a muddy mass, and pop where possible. As for the letters, even something as simple as the use of the Phantom Stranger's logo in his opening word balloon can add a lot to the page. Otherwise, Mangual keeps things neat, and gets the emphases spot on.

The cover by Ivan Reis, Joe Prado and Rod Reis is great looking, but unmemorable - it's super-team battle 101, fairly summing up the point of this event storyline - heroes go fighty-fight.