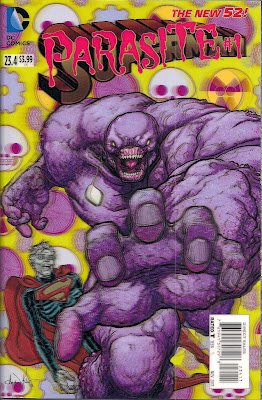 The Parasite stands on the edge of a building in Metropolis' Suicide Slum. He's had enough. Three weeks as a monster, with a hunger that won't stay down, has him contemplating his only out - a big leap into nowhere. As he plunges pavement-wards, his last few weeks of life pass before him ...

Meet Joshua Michael Allen, world's worst bike messenger. He delivers the goods, and he delivers an attitude. One day he gets caught up in a monster attack and is changed. Transformed into a freakish creature with purple skin and terrifying mouth, he's consumed by a hunger that can be sated only by eating the life force of others. And then only temporarily.

Barely a month later, then, he's falling, expecting a quick blast of pain to bring oblivion. But this is Metropolis, and Superman's passing by. He saves the Parasite, but in doing so gives him his first taste of real power. He absorbs Superman's energies, and regurgitates them. But while he has the Man of Steel's power, he lacks his experience, and soon Superman has him in Belle Reve, the pen for the super-powered.

The tie-in to Forever Evil #1 is there, but we don't meet the CSA in this issue. This is the Parasite's show, and quite a show it is, showing us who Joshua Allen was, and what he becomes.

This comic is what I needed.

After the grimdark nonsense of Joker's Daughter, here's a Villains' Month special that gives us grisliness with a light touch. The Parasite's acts are no less shocking than those of Duela; heck, he kills where, so far as we know, she hasn't. But Aaron Kuder, providing the story as well as the more expected art, skillfully weaves humour into his work, and economically sketches in Allen's personality so that we know him well enough to sympathise with his plight. At least initially, when he doesn't know what he's doing, can't control his body.

While there is darkness, my takeaway from this book is a big cheesy grin. Kuder the writer gives us huge monsters, a powerfully competent Superman, amusing background players and a chillingly witty close. He frames the origin sequence with skill, showing us the supposedly perfect world of Metropolis from the perspective of the little guy, someone who'd just like to go about his day without running into the kind of trouble Superman attracts. In this case, a 'giant ... booger... monster'. The script delights from beginning to end, with witty notes that contrast with most of DC's output these days - yes, it's a scary world, but observing it with a wry eye may just make it more bearable. 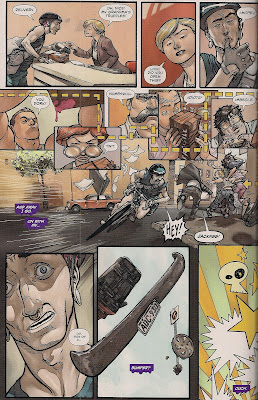 Kuder the artist produces page after page of stripwork to hearten the soul, beginning with the eye-popping 3D cover and never letting up. Allen is a nice creation, and visually something more than your average comic book guy, who's good-looking and characterless. Depending on his physical state, the Parasite veers between pathetic and horrific, lavender mummy and purple people eater. And Kuder's strong Superman bodes well for his coming Action Comics run with Greg Pak writing. Colourist Tomeu Morey also deserves a nod for beautifully applied, considered tones.

Kuder impresses throughout - there's a vibe reminiscent of Scott Kolins' superb Flash run - and never more so than on a page which, well, take a look (click on image to enlarge): 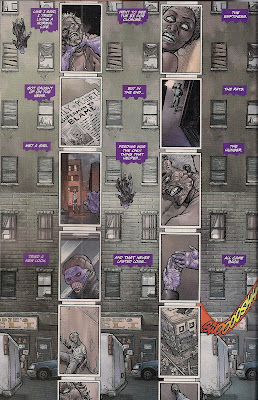