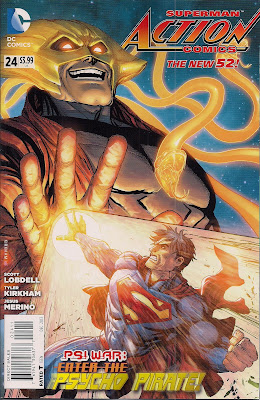 The Psi War storyline began in the Superman series a few months back and it's now spilled over into Action Comics. Duelling mentalists Hector Hammond and the Hive Queen have been taken down by a new player, the Psycho Pirate. Hector is unconscious but as for the Queen, she's exploded into 'psionic goo'.


Meanwhile, Lois Lane lies in Metropolis General Hospital, watched over by boyfriend Jonathan. He's held vigil by her bedside for days, since her encounter with a psychic in Superman Annual #2. A doctor takes him away from her for a moment, and when he turns around once more ... she's gone.

Psycho Pirate explains to Superman that like the Queen, he's one of the Twenty, the Metropolis citizens given mental boosts by Brainiac as part of a longterm plan. The alien wanted to see if Earth people would make suitable vessels into which to download the minds of his people. The Queen embraced his vision, and began kidnapping psychics of all origins, not just the other 19, sucking their power as part of her plan to enslave first Metropolis, then the world.

The Pirate escaped and located the legendary Medusa Mask, which gives him protection from psychic assaults while boosting his own power. He wants to free the other psychics from The Swarm, the Queen's prison of honeycomb cells. He launches a mental assault on Superman, bringing back painful memories of his first months in Metropolis, corrupting his recollections of Smallville, feeling the confusion of his escape from Krypton.

Superman is helpless, until a newly empowered psychic arrives and batters the Pirate with a brain bolt. It's Lois Lane, an angel of blue energy with a smart mouth. 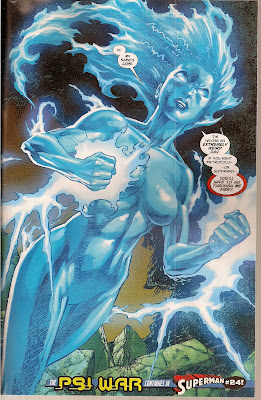 That last page, with Lois looking for all the world as if she's channelling Electric Superman, is a wonderful surprise. Storyline writer Scott Lobdell might have left her supine until Psi War's end, but here she is, ready to save Superman's skin. Superman books are always better when Lois is around.

Psycho Pirate is an entertaining rogue; he has good intentions, but he's going about things entirely the wrong way. Rather than ask for Superman's help - the Pirate admits that Superman saw off Brainiac last time - he assaults him, hoping to gather Superman's psionic energy for himself. He's no better than the Queen he condemned.

Is this the first time in the new continuity that Superman's powers have been linked to psionics, the concept that so enchanted post-Crisis makeover guy John Byrne? Bah, I say - Superman gets his powers from Earth's yellow sun and lower-than-Krypton gravity. Perhaps these things enhanced his brain a tad, but enough with a psychic Superman, he has enough abilities already.

There's another post-Crisis callback in the flashback presence of Kenny Braverman - again, I think this is his New 52 debut; I wonder if this version grew up to be super-villain Conduit too.

Despite the credits on Tyler Kirkham's striking cover, Lobdell's not actually writing this issue, it's Michael Johnson. He does a fine job of wrangling the Brainiac mythology Lobdell's been building, with my only real complaint being that there's no still no acknowledgement of the fact that earlier in the storyline, Orion of the New Gods gave Superman mental shields to help him resist psychic attacks. My theory is that the constant assaults by the Queen, Hammond and now the Pirate have sent them crumbling, but as it stands we have a plothole.

I've previously been a tad dismissive of the new Medusa Mask, having loved the version from previous continuities, but seeing it in action under the pencils of Kirkham has made me a fan. The snake visual is a brilliant way to represent mental attacks, probing and pouncing, and there's the bonus of a 'serpent in the garden' visual in the Smallville sequence. 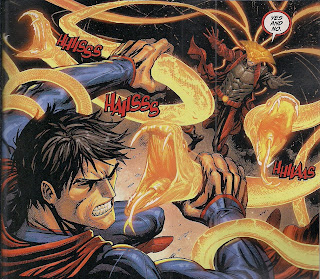 And why did it take me so long to notice that the Pirate's new look is based on Grant Morrison, Mark Millar and N Steven Harris' Aztek? This issue's cover by Kirkham and colourist Arif Prianto makes it abundantly clear. Inside the book, Kirkham is inked by Jesus Merino, and they make a stunning team - Kirkham composes the pages beautifully while Merino brings them to vibrant life. There are so many great panels, all of which work both as part of the storytelling and as standalone images. A couple of favourites include tee-shirt Superman ... 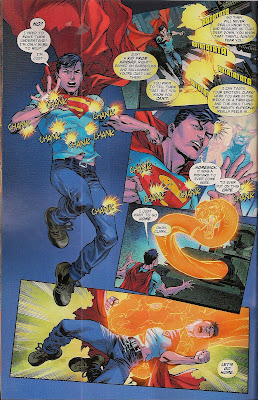 ... and Jor-el and Lara, looking the best they have for years. Superman's birth father, in particular, looks superb, in an updated version of his Silver Age garb.

And the colours of Prianto are a treat, whether it's the dark skies of Metropolis or the autumnal glow of Kansas.

I'm not thrilled that we're now getting just 22 pages of story and art for $3.99, I'd rather have a £2.99 20pp book, and did anyone ask for a card cover that bends annoyingly? But the creators ensure every page counts, making for another thrilling chapter (TM) in the never-ending battle.
Arif Prianto Aztek Jesus Merino Mike Johnson Psi War Scott Lobdell Tyler Kirkham