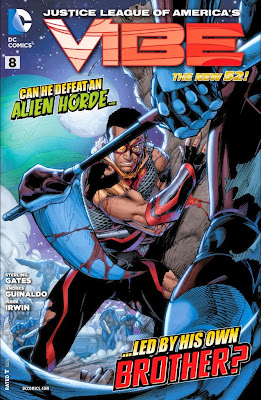 Before Villains Month so rudely interrupted the regular storyline, Vibe was in trouble. His brother Armando, now the interdimensional murderer Rupture, was making off with his friend Gypsy. And, leaking energy due to being stabbed in the chest, an unconscious Vibe was left floating between worlds.

At the start of this issue, he lands on one, Gemworld, summoned by Princess Amethyst's connection to Earth. Without really knowing what he's doing, the rapidly weakening Vibe draws out some of her Earth radiation, before he's taken away by the mysterious Breacher. Another who can traverse realities, Breacher explains that he's from Piradell, the world Rupture and his boss Mordeth sundered. But he's not telling the whole story ...

First, the bad news. It was announced yesterday that Vibe #10 is the last issue. Not enough bats or lanterns, I guess. The good news is that after this we get two more instalments of one of comics' best superhero books. Sterling Gates continues to write a hero with heart, soul and brains - even in his somewhat dazed state Vibe realises that Breach is off, and forces him to tell the truth.

The visit to Gemworld makes sense, working to keep Vibe alive, and Amethyst in DC readers' minds. While we're told she'll be fine after Vibe's inadvertent assault, it'll be interesting to see her attitude to him at some future meeting. Gates does well by Amethyst, putting her bravery and humour to the fore. Still, I missed Gypsy, Dante and Gunn, none of whom show up this issue. I was pleased to learn more about Vibe's growing abilities courtesy of Breacher ... if he wasn't lying about that part, that is. Whatever the case, we're roaring towards a conclusion - I just hope Gates can show us who Darkseid's daughter is before then, as he reveals Breacher here. 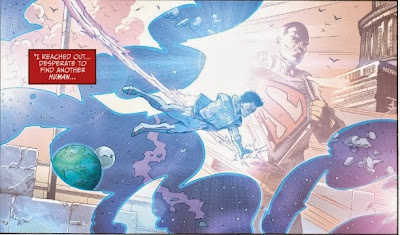 One of the incidental delights of this series is passing cameos of characters from other realities. This time we get, hmm, various people I don't recognise, and Grant Morrison's President Superman. He's drawn well by Andreas Guinaldo, who produces good work throughout the issue, with a particularly nice version of Amethyst (ultra-bendy splash-page leg excepted). I also like how, with the aid of inker Mark Irwin or other inker Marc Deering, and colourist Brad Anderson, he shows Vibe's mood darkening on one page, and set to explode on the next. 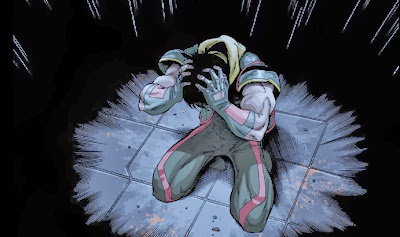 It's interesting that Piradell is drawn as a slightly futuristic version of Earth, given its Tolkeiny name. Interesting, but likely irrelevant!

The book ends on a good note, with truths revealed and a rallying call to rescue lost friends - and save the multiverse. So what if Vibe is losing his book, how many heroes get to make such an impact?
Andres Guinaldo Brad Anderson Justice League of America's Vibe #8 review Marc Deering Mark Irwin Sterling Gates