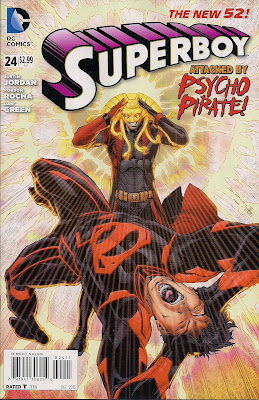 Psycho Pirate has revealed himself to Superboy as the man behind the weird goings on at a city school. His Medusa Mask gives him enough power to keep Superboy calm while he explains that Kon's new friend, Dr Psycho, has been using him, getting close enough to tap into his psi powers and begin taking them for his own. A haunting mindscape is the venue for a look back at how a tormented, confused kid became Dr Psycho, and back in the real world, Superboy attacks him, enraged at the lies he's been fed. Unleashing his power only succeeds in letting the diminutive devil steal more, putting him on a par with Kon ...

There's an awful lot of exposition this issue, and I couldn't be happier, as writer Justin Jordan elegantly, entertainingly links the cuddly Dr Psycho seen in this book of late with the thoroughly nasty lot shown in the Justice League's Trinity War crossover. He also connects this instalment directly to last week's issue of Action Comics, with the Psycho Pirate revealing that he's fighting Superman at the same time he's confronting Kon. Sharp dialogue and regular bouts of action ensure this isn't just a big old infodump, and there's a new wrinkle added as Superboy learns that Dr Psycho knows more about his clone origins than he was letting on, courtesy of Psycho Pirate ('You're a living organ bank').

It's sad to see Superboy realise that he hasn't yet stopped being everybody's patsy, and then give in to the anger Psycho Pirate is stoking in him, but I'm hoping the unpleasant epiphany will lead to a period of calm. Superboy's been too much the loose cannon in this series, his personality ever changing; it'd be good to see him cast off the shackles others have forged and make his own way in the world, embracing the heroism that seems to break through whatever programming he's been given by the likes of rubbish bad guy Harvest. 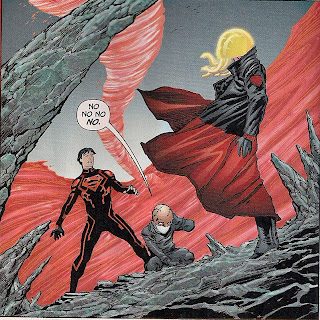 Rocha likewise embraces the splashier moments of Jordan's script, letting the displays of power mirror the tumultuous emotions. Helping the young Brazilian look even better is veteran inker Dan Green, a man who truly knows how to lay down the blacks. There's pleasing colourwork, too, from Richard and Tanya Horie, especially in the throwdown between Superboy and Dr Psycho (a top-of-the-spread scene too large for my humble scanner, sadly).

Brett Booth, Norm Rapmund and Andrew Dalhouse pencil, ink and colour a well-composed cover that shows off the Psycho Pirate's mental strength extremely well. Me though, I'm more excited by the logo colours - purple and white with a green tinge, a very rare combo and an attractive one.