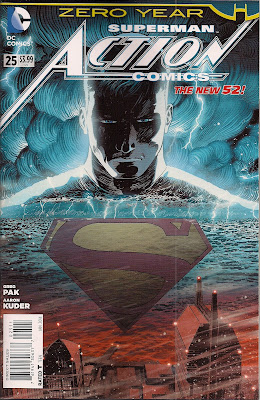 Tying into the Zero Year series in Batman provides new Action Comics creators Greg Pak and Aaron Kuder with a great excuse to give us more of Grant Morrison's tee-shirt Superman. The story begins even earlier, though, as Lana Lang says goodbye to Clark Kent and Smallville, ready to make her mark on the world. Flashforward four years and Superman is learning his limitations on the battlefield, tackling a bunch of supremacists who subscribe to both hi-tech techniques and mad mysticism.

Clark is realising how much he can do, as he gets stronger by the day; truth be told, he's a little drunk on power, but he gets the job done and is soon writing up the story for the Metropolis Daily Star. Hearing - via his neighbours' TV - that a superstorm is heading for Gotham, he realises he should see what he can do to help. Not yet able to fly under his own steam, he leaps onto a passing plane and sets down over the ocean, hoping to stop the storm in its tracks by creating a water vortex. Also in the area is Lana, now electrical engineer on a cargo boat, and doing everything she can to keep the craft out of danger.

Killing the typhoon proves beyond him, and Superman realises he must save the ship, which is in danger of being flattened by an abandoned, storm-tossed oil tanker. It takes titanic efforts on both their parts, but eventually the Smallville sensations save the day - without either one knowing the other is there (apparently Lana's stopped using the shampoo which, on page one, Superman could smell from three miles away).

Pak and Kuder make an impressive debut. Pak's script provides an insight-packed snapshot of Clark at a formative point in his superheroic career, while giving Lana more of a spotlight than she's had so far in the New 52 continuity. Dual narration points up the similarities between the pair - both risk becoming danger junkies, and both have an implacable drive to get the job done. Clark's excitement and joy in his abilities makes sense, and it's much more my cup of tea than the angsty guy we saw on the Smallville TV show, forever depressed by being able to fly, bend steel with his bare hands, ignite dormant suns ... how awful for him. And his joy becoming overconfidence is a logical follow through, motivating lessons without lectures.

There's so much to praise in this issue that it's tough to pick a standout moment. So here's one of many, as Pakuder (maybe not!) show us the tension the young Superman faces between being accepted, and doing the right thing. 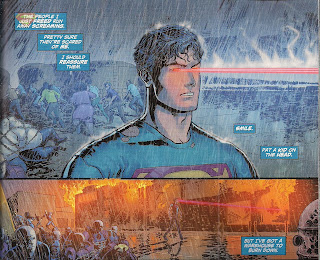 I'm impressed that Pak links in so neatly with Zero Year without Superman having to show up in Gotham - let's hope the rest of this month's tie-ins are so deft. 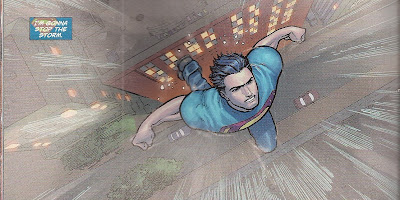 Kuder's artwork is pitch perfect for Pak's script, from the outstanding opening fight scene onwards. Pak and Kuder's Superman isn't yet at full power, but the tussle with the surpremicists is more thrilling than your average Superman vs Brainac/Mongul/Darkseid encounter - there's real pace, and a sense of peril. Indeedy, afterwards Clark is awash with sticking plasters. I like how Kuder represents x-ray vision, I love his Clark leaping upwards into the rain, and I adore his smiley sharks.

His Lana doesn't quite hit the spot, there's something awkward about her, especially so far as the mouth goes, but I've faith she'll settle down. Colourist Arif Prianto does an excellent job too - I really like the toning here. I feel wet just reading this stuff 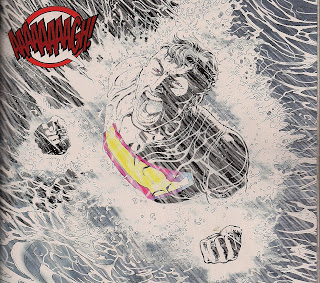 With DC's $3.99 books having shrunk in page count lately, it's great to see 28 pages of story and art this time, making room for a short by Pak and artist Scott McDaniel (with a page by Kuder) which acts as a transition between the Zero Year focus and next issue. It's centred on Clark, in the present, having a sandwich on the streets of the city, noticing how much better his hearing gets by the day. He's picking up more cries for help all the time, and some he manages to respond to without even leaving his seat. Others, such as a homeless man in need of cash, require a more hands-on touch. Clark wonders how he'll cope as he becomes ever more aware of greater dangers to the world - how can he help everybody? It's a dilemma that has faced Superman in many incarnations, and I'm fine with it being raised again here as it truly is a question for the generations - how much can one man do?

The musing is interrupted by a new mystery, something rumbling under Clark's feet. And there are stirrings thousands of miles away, in Venezuela, where Lana and a mining crew are confronted by a massively mouthed monster.

Pak's script has lots of pep, and  McDaniel is on good form, giving us sharp layouts and a pretty good Clark. Colourist Dan Brown takes advantage of the script's reference to a lovely autumn day to bring us sunshine colours, while Carlos M Mangual letters with style, as he does on the main strip.

The cover by Kuder is a clever composition, with Wil Quintana's colours the perfect finishing touch.

After a tumultuous period, the best thing DC could do with this book is keep Pak and Kuder tethered to the title for awhile - they have ideas, they have talent, so let them build up a head of steam and take Superman somewhere new.

And one more thing - is it me or has a certain pose from Man of Steel become near iconic? Twice in one issue! 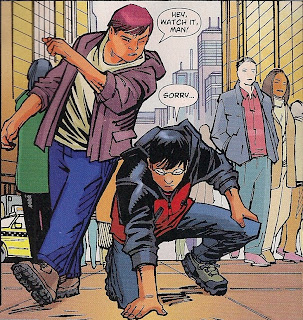