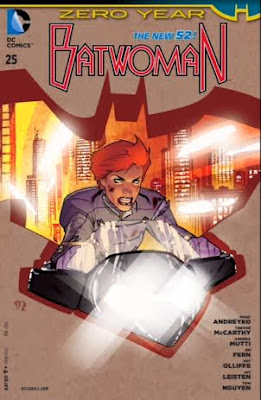 Several years ago, it was lights out in Gotham when the Riddler pulled the plug on the power grid. Home from military academy for the funeral of her Uncle Phillip, Kate Kane refuses her dad's request to stay home and let someone else be the hero. She sneaks into the city on a 'borrowed' motorbike and, armed only with her wits, fitness and a crash helmet, kicks some criminal butt.

I was dubious about the wave of tie-ins to Scott Snyder and Greg Capullo's Zero Year storyline, but every one I've read so far has been pretty darn good. This entry sees the debut of new series writer Marc Andreyko - long story, you likely know it - and he grabs me from the first panel (click on images to enlarge).

The quick reminder that Kate is actually related to Bruce grabbed me more than any number of recent issues, emphasising that Kate isn't simply a pasty-faced, angry vigilante who constantly makes bad decisions, but a literal member of the Batman family. I want to see her interacting with Bruce, I want to see their perspective on one another. So I'm delighted by the funeral scenes this issue, which show a little bit of the family feeling between the cousins and, as a bonus, throws in the younger Bette Kane. 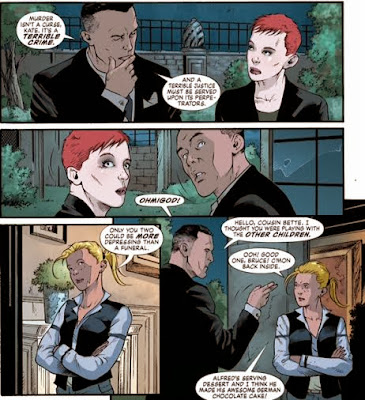 It's also a treat to see Kate and Alfred have a moment, and I'd love to see more of the redoubtable Mr Pennyworth in this book. Perhaps he could take Kate a slice of his 'awesome German chocolate cake' (Bat Forest Gateau?) on his day off?

The big storm heading for Gotham is the perfect excuse to bring Kate's future girlfriend, Maggie Sawyer, into the book at a time before she's relocated from Metropolis to Gotham - the young cop volunteers for a task force to travel to Gotham and help out. So she makes the scene of Kate's first foray into crimefighting, and it's safe to say their eyes meet ... I like this first encounter a lot, it's a tad contrived, sure, but feels organic in story terms, and adds a little more history to their relationship.

There's a bit part player in here who could easily become a character in the modern-set stories, a doctor who admires Kate's pluck. Every hero needs a personal physician, surely?

As he proved with the much-missed Manhunter, Andreyko writes fight scenes well, with actions happening in defined spaces he has the hero use. He's smart, and he makes Kate seem smarter too. This book is going to benefit from his presence. 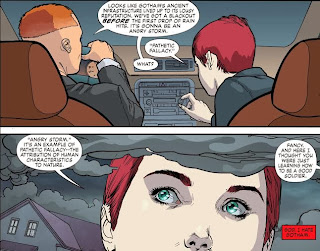 The circumstances of Andreyko's arrival means this issue is a rush job, hence we have a number of artists -pencillers Trevor McCarthy, Andrea Mutti, Jim Fern and Pat Olliffe, and inkers Tom Nguyen and Jay Leisten - and the look varies. But as I say, rush job. One very tall Kate apart, the figurework is fine, the storytelling is clear, and I'll take a great script - which this issue has - over beautiful art any day. Both would be nice, mind.

And that's not to say there aren't some very well done moments. 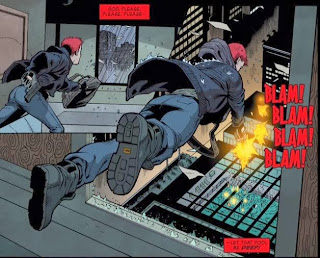 As almost ever, DC don't bother with credit breakdowns, so I can't attribute anything with certainty. I can give a big old 'well done' to continuing colourist Guy Major and letterer Todd Klein, for helping knit the narrative together with their contributions. Both are excellent craftsmen - Major makes Gotham extra moody and shows us Kate's first foray into vamp make-up, while Klein adds subtle, clever touches such as broken-edged word bubbles for whispers rather than the usual, can-be-difficult-to-read faint text.

Stephane Roux's cover looks good, capturing Kate's determination while incorporating the bat-symbol in a way that implies she's pummeling towards us.

DC seems to be charging $3.99 for all the Zero Year books, but we're getting more pages - 28 here and not a single one wasted.

It's ironic that Batwoman is beginning a new phase of her publishing life with a trip to the past, but it's a trip well worth making. 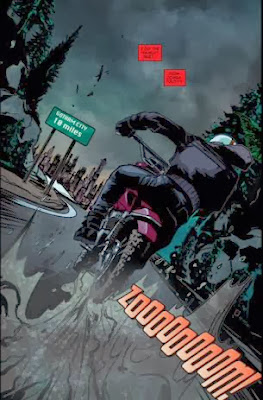