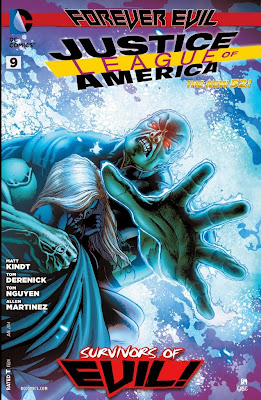 J'onn J'onzz and Stargirl are the only Leaguers not trapped inside a weird world by their own fears. Separately, they wander from place to place, encountering Wonder Woman, Aquaman, Shazam, Madame Xanadu and new Green Lantern Simon Baz. They can't be reasoned with. Stargirl searches for J'onn, while remembering her beginnings as a hero. Eventually she finds J'onn fighting a manifestation of his own psyche.

On the one hand, Matt Kindt's script is a by-the-numbers continuation of last issue's storyline, with more variations on the theme of Justice Leaguers' secret fears (Aquaman sees the world's marine life die; Madame Xanadu must embrace the dark side; Baz becomes the terrorist some people think he is, when in fact the poor dear's only a car thief). Or perhaps it's not so much fears as secret desires (Wonder Woman has a never-ending battle to engage her; the Hero Formerly Known as Captain Marvel can smash robots to his heart's content). I'm not too clear on that point.

On the other hand, this almost-throwaway bit of crossover fodder allows Kindt to work on J'onn J'onnz, bringing him closer to the classic, compassionate version than the ruthless guy seen in Stormwatch - an interesting character, but not the Martian Manhunter.

And we do get some background on Stargirl, who was introduced a few months ago simply as Courtney Whitmore, teen heroine. Here we see that her origin is pretty much the same as the earlier version of Courtney, when she was the second Star-Spangled Kid - good student finds weapon among stepdad Pat Dugan's things. The details are different, in that rather than Sylvester Pemberton's Cosmic Converter Belt she finds the cosmic staff first used, in the previous continuity, by Jack Knight, And rather than make her own costume, she adapts one found in Pat's trunk. We don't meet Pat here, and the connection to Pemberton - who has been mentioned in this book - is still to be revealed. But this issue is a start, and Stargirl flying over LA, delighted by her new, borrowed powers, is a moment of pure joy the like of which is seldom seen in DC's New 52 books. And when she sees that people may need help, she's straight in there - no angst, no ulterior motives, just the heroic urge (click on image to enlarge). 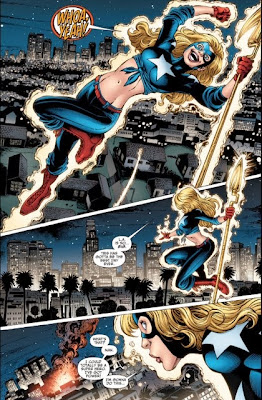 There's another heroine moment worth showing you, because it made me laugh and laugh and laugh. Penciller Tom Derenick does a lovely job with this Madame Xanadu composition, the tricky perspective works superbly, but combine the image - the previous page's script suggests that the purple gunk should be coloured red, I'm glad it isn't - with the dialogue and you get high melodrama the like of which the Victorians would be proud. 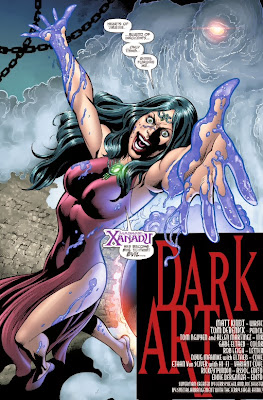 Oh, and there's one more heroine in here, making her new continuity debut, sort of, and given that her costume was the inspiration for Courtney's way back when, it's rather appropriate: 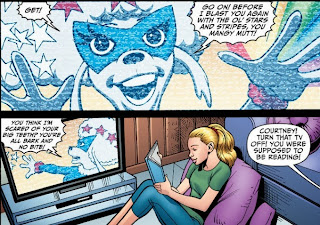 Yay, it's Yankee Poodle from Eighties funny animal comic Captain Carrot and His Amazing Zoo Crew. OK, she's 'just' a TV cartoon here, but I know how DC Earths work, somewhere out there a TV writer is receiving dream versions of the real pooch's adventures on Earth C. I so much prefer this cameo approach to  the recently cancelled Threshold's use of the grrr-tastic Captain K-Rot and Pig Iron.

We do see Courtney's mom, but only from the shoulders down. How mysterious. Given the way Courtney's quoting of her mom transitions to Yankee Poodle's dialogue on the TV, I'm guessing she's the voiceover artist, and we don't see her head because she has a frightful poodle perm. Yeah, that's it ...

Courtney is appealing throughout, a bright, non-bratty teenager, and her attitude proves key to the story; I especially like her reaction on meeting Wonder Woman ('J'onn, I totally just saw Wonder Woman. She is freaking tall!'). I hope Stargirl isn't grimmed up as the months pass, the more bright, inspirational characters, the better (didn't Amanda Waller hint that she has A Secret? I do hope she hasn't - but she likely will have, and it'll probably involve Pemberton being a depraved casting couch type). That page above, with her soaring over the city, is my favourite piece of DC art in months, all credit to Derenick and inker Dustin Nguyen or other inker Allen Martinez. And the colours of Gabe Eltaeb - who also tones Doug Mahnke's striking cover - are terrific, it's just a shame that the last page return to the real world sees the typically muted tones come back too. The entire issue looks great, I'd be very happy to see this art team on the book full time

Justice League of America #9 isn't an essential purchase if only the so-called big stories matter to you, or if you're watching the pennies.
The 'superheroes trapped by their own psyches' is an old trope (my favourite spin remains Teen Titans #38, from the days dinosaurs ruled the earth) but I suppose a new continuity is a decent excuse to roll it out again. Really, though, the reason to buy this book is to enjoy Stargirl, a bright new star in the DC firmament. More please.
Allen Martinez Doug Mahnke Justice League of America #9 review Matt Kindt Tom Derenick Tom Nguyen