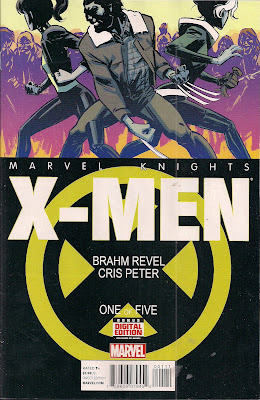 Rachel Grey has a bad dream, a vision of a young boy with strange features being chased. It rattles her, and spurs fellow X-Men Kitty Pryde, Rogue and Wolverine to take a road trip to the tiny town of Prospect, West Virginia, where Cerebro says there are two more mutants. Logan is full of hell, angry that 'innocent children' are being hunted down. He gets into a bar fight, giving Rogue and Kitty a chance to snoop around. They find Krystal, a scared teenager who lies about the true nature of her mutant abilities - she says she's a precog, the reader knows she has persuasion powers. And she doesn't mention that she's stealing drugs for a guy named Jasper. The issue ends with Wolverine being confronted by one of the X-Men's greatest foes.

And on seeing said enemy, I shrugged - I shouldn't say who the person is, as it's a last page reveal, but imagine the most played-out of Logan's playmates and you're there. Mind, I'd already decided not to bother with any further issues of this series - this comic isn't awful, but it's just not very interesting. The tone is TV movie, with our heroes the questing strangers in an unfriendly town. The artwork by Brahm Revel, who's also writing, does the job, being gloomy and lumpy and featuring plainer than usual versions of Kitty and co. I like it. But I'm not sure Revel is terribly familiar with the X-Men.

For one thing, to have Rachel Grey utterly freak out at seeing a kid hunted down makes no sense. Yes, she feels his fear, but she's a refugee from a dystopian future in which she personally hunted down mutants. It's later suggested the boy has been murdered - Revel should have made that clear at the start - but still, Rachel has seen untold horrors as a member of Excalibur and the X-Men. She should have rallied her teammates; instead she's back at the Jean Grey School, shivering and snivelling.

And then there's this moment (click on image to enlarge). 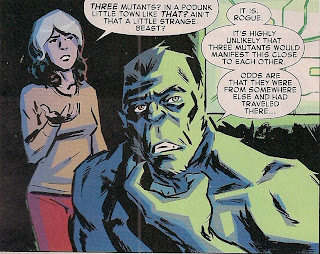 Which would be fine, if the extended X-Men family didn't include Sam and Paige Guthrie - Cannonball and Husk - and their many mutant siblings from Cumberland, Kentucky!

And then there's Kitty's reaction to the situation. 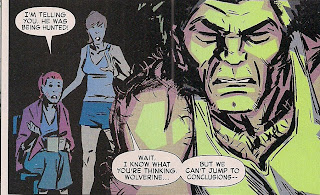 Uh-huh, there's the probability mutant children are in imminent danger and she doesn't think they should investigate immediately? Overall, the characters seem off. 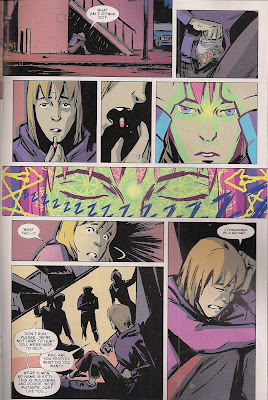 There are some positives, though. While her pals are histrionic, Rogue is her classic, charming self. Revel does a splendid job of getting across Krystal's sense of isolation, and of showing how scary the X-Men seem to her. The colours of Cris Peter attractively highlight when she's using her power. And the penultimate page, with Wolverine in a 'haunted' house, is really rather eerie.

No, this isn't a bad comic, but it's not my cup of tea. Lord knows why it's being released under the supposedly edgier Marvel Knights imprint - it's just an X-Men book with a dimmer switch. Instead of unleashing one more X-Men series on the world, couldn't Marvel give the undoubtedly talented Revel the freedom to create something all-new, all-different?
Brahm Revel Cris Peter Marvel Knights: X-Men #1