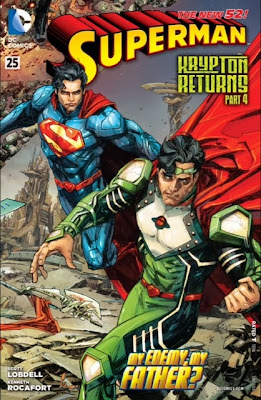 I've been avoiding the latest crossover in the Superman family of books because, well, H'el. Knowing that this issue would likely see the death - or more likely, 'death' - of Superboy, though, I had to check it out.

I've been keeping up with the storyline via the excellent Supergirl's Comic Box Commentary, so wasn't coming in cold. And writer Scott Lobdell does a decent job of including salient details as we go along. He gets off to a bumpy start, mind (click on images to enlarge). 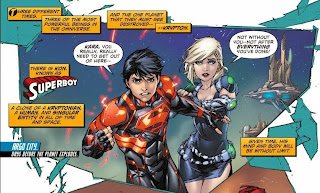 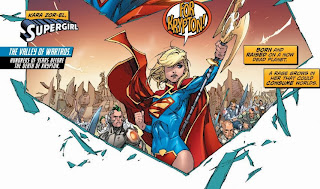 And that's why I've been avoiding H'el again in Krypton Returns - Supergirl always winds up coming out badly. Happily, by the end of the issue we have the calm, compassionate Kara of classic comics, but it's a close-run thing, with her again acting like a deeply weird person mid-chapter.

The action sees Superman, Supergirl and Superboy at different points in Krypton's timeline, their ultimate aim being to save the planet from the rule of mad god H'el. This most likely means ensuring Krypton explodes, but if it's possible to save the planet at the same time, they'd be delighted.

Superboy, positioned a year before Krypton's demise, has been working with the younger Kara Zor-El against a version of H'el. He's also had a run-in with bad Superboy Jon Lane Kent, which has unlocked his psi-powers to a previously unknown extent. Realising there's a problem with the anti-gravity field which history says sent Argo City into space, saving Supergirl and her parents from Krypton's destruction, Superboy decides to put his new abilities to good use.

He lifts Argo off the ground, sends it shooting out into space and even gives Kara's rocket a boost as it heads for Earth. The effort uses up his telekinesis, meaning he has no protection as Krypton dies. Caught in the blast, he's gone ... 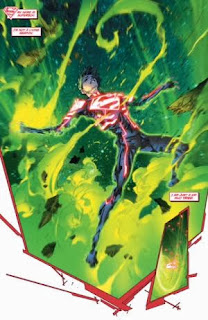 The final words Lobdell gives Kon are beautiful, and if the character had been so deftly written throughout his two-year stint as Superboy, I doubt he'd be getting sidelined for a while, leaving his book to be taken over by JLK. No thank you, DC. The sooner Kon returns, the better - I'm sure any reader could throw out ten comeback routes in ten seconds flat.

Supergirl is much further back in Krypton's past, about to off one of H'el's avatars with a massive lance, but she hesitates, and her lunatic ex does the job himself. As suicides go, of course, it's pretty rubbish, given he still exists in other times.


Elsewhere, in 2013, Superman teams up with his father Jor-El to beat H'el once and for all, trapping him in some kind of time loop that might yet keep Krypton stable. This Jor-El is in his fifties or sixties, being from a Krypton which survived and on which he was a prisoner, considered a lunatic because his prophecy of Krypton's doom never came to pass. They called him the Doomsday Man - a fun, Silver Age-y name which worries me only because I fear Lobdell will at some point tell us the horrific Doomsday is actually a transformed, alternate reality Jor-El. Still, that likely won't happen until at least next month.

This month sees Lobdell produce a script that works on its own terms; I don't get all the details, having skipped chapters (Kara now leaves for Earth immediately, rather than weeks or months after Krypton explodes?) but I can see he's working hard to tie the disparate elements of his story together. I especially like Kal-El showing his father that he's inherited his sharp mind. Better still, he's against killing to the extent that he won't even let his father finish H'el off once and for all. 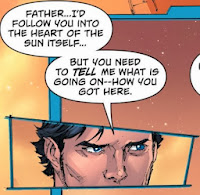 Mind, so far as 'I'd do anything for you' moments go, this doesn't seem like a big reach for Superman, who only gets tougher the nearer the sun he gets.

Lobdell's visual partners, artist Kenneth Rocafort and colourist Blond, produce page after page of dynamic layouts that crackle with energy. A favourite moment sees Jor-El, clad in a super-suit of his own, bid to blast H'el to, well, Hell. 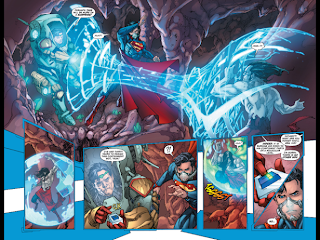 Jor-El looks superb, his own man rather than simply Superman in green suit and headband, and the bearded version in prison flashback evokes recent cinema Jor-El Russell Crowe nicely. Kara, too, looks terrific and H'el, well, he undergoes a splendidly eye-catching metamorphosis that sees him emerge as something akin to old DC villain Krona.

But my abiding visual memory of this issue will be Superboy's sacrifice, and its last-page aftermath. With words and pictures, Lobdell and Rocafort remind us what it is to be a hero.