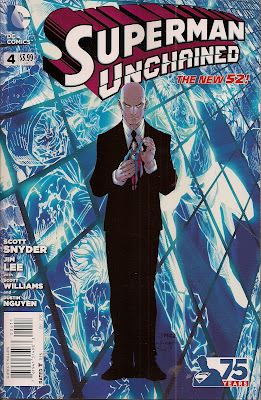 Superman and Wraith are defending Tokyo from an attack by the Ascension terrorist organisation. Lois Lane is in Nova Scotia with the mystery man who stopped her plane from crashing. And Jimmy Olsen is in an interview with Lex Luthor.

Unfortunately for the Daily Planet snapper, it's Luthor who's asking him the questions, and to ensure he answers, Jimmy is strapped up underneath a heavy-bladed machine with scarily moving parts. And the query Luthor most wants answered: who does he think will kill Superman?

We hear Luthor's own theory at the close of this instalment, after seeing Lois learn how her companion saved the plane, and Superman and Wraith prove a surprisingly effective team. Last issue's cliffhanger saw Wraith tell Superman that one day he would kill the Man of Steel, and here the question hangs over the more immediate problem of defending Tokyo. Writer Scott Snyder plays eminently fair, having Wraith explain himself while leaving the mystery of the 70-year-old military superman's origins hanging.

The Tokyo scenes allow Snyder, as he's done previously, to look afresh at Superman's powers, as the more experienced Wraith teaches him a new trick. Short bullet bursts of heat vision, enabled via blinking, seem head-scratchingly obvious now Snyder has thought of it and Jim Lee and Scott Williams drawn it ... 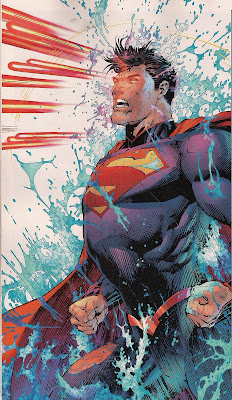 The teaching isn't all one-way, as Superman shows Wraith his knack for battle tactics, and reminds him to consider bystanders as people, not collateral damage. The lesson doesn't immediately take, but he at least give Wraith something to think about. And it's good to see another Superman writer apparently responding to the heavy-handed, thoughtless tactics of the silver screen Man of Steel  (click on images to enlarge).

It's also heartening to see a Superman who can make a joke without seeming inappropriate, and the gentle smile courtesy of Lee is lovely. 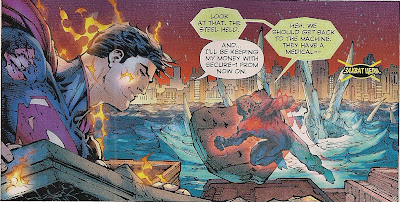 We also get a panel that I'd love to see printed on a tee-shirt for the DC execs masterminding the New 52 line. 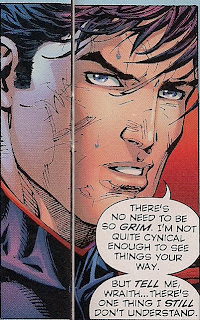 Lex, in classic villain tradition, monologues maniacally while menacing Jimmy, explaining his love of origami via an elegant, economical history lesson. Lois continues to be the intrepid journalist, Superman's partner in crimefighting even when they're not sharing a page. The mystery of Ascension - the Luddite machine breakers with surprisingly hi-tech methods and a love of folk singalongs - deepens. And we observe the World's Worst Ambulance.

Snyder's script is well-worked, with commendably individual dialogue - it's easy to hear the differing voices of the cast members, from grizzled Wraith to frightened Jimmy via urbane Lex and determined Lois. And Superman? Confident, but never cocky - this is one of the most likeable portrayals we've had since the DC relaunch of 2011. There's a real sense that Snyder knows exactly where he'll be placing the cards in future chapters, while remaining excited to be working on a Superman story. A tip of the hat, too, to editors Chris Conroy and Matt Idelson, for all the invisible bits of business without which there'd be no comic. 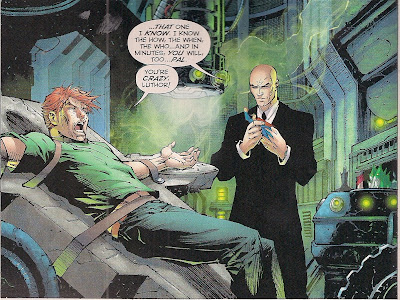 Lee, Williams and colourist Alex Sinclair make the action pages pop, while the Lex/Jimmy scene reeks of menace and Lois's section drips with suspense. Luthor's origami dolls of Superman's friends and fellow heroes are creepy critters. The bullet bursts panel above is my favourite image of the issue, but I'm also impressed by the artists' vertiginous full-page shot of Tokyo under siege.

Dustin Nguyen steps in, as usual, for the final two pages, which continue Lois' mini-adventure. Coloured by John Kalisz and lettered - like the rest of the issue - by the talented Sal Cipriano, this is good, moody work.

The cover is a keeper too, with master manipulator Lex artfully placed before the angled view screens.

I don't know how many issues this storyline runs, but I'm enjoying it enormously. It feels like a classic Superman story, yet thoroughly - if Marvel will excuse the expression - now. That's quite the trick to pull off.
Alex Sinclair Chris Conroy Jim Lee John Kalisz Matt Idelson Sal Cipriano Scott Snyder Scott Williams Superman Unchained #4 review