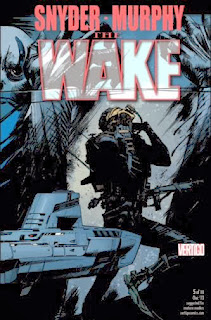 Trapped on an undersea research station, under attack by savage mer-creatures and with several colleagues gutted, marine biologist Dr Lee Archer probably thought things couldn't get any worse. But the monsters turned out to have a daddy monster, a super-sized version with only one apparent thought - kill.

As this fifth chapter of Scott Snyder and Sean Murphy's story progresses, though, Lee realises that the being has a greater goal - to wipe out mankind. No longer can the idea of escaping the Arctic ocean hold the prospect of survival, because massive waves - filled with millions of monsters - are coming.

In just five issues the threat level has gone from one subterranean horror to a horde to a god-monster ready to, as the old line goes, 'destroy all surface dwellers'. Along with the escalating tension, this chapter gives us more satisfying interactions between Lee, rig captain Mel, folklorist Marin and hunter Meeks. Once again, it's the last of these who threatens to steal the show, spitting out bile at his colleagues while proving to be the ramshackle team's MVP. 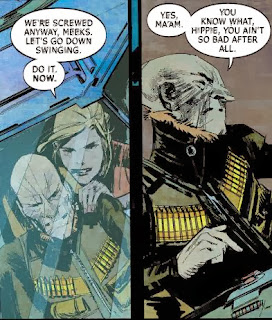 Everyone earns their page time, though. It's smart people making tough decisions in the heat of danger - irresistible.

Snyder's plotting and pacing are on a par, the one strong enough to fascinate, while the other pulls us through the story at breakneck speed. And when we get to the end, there's a heel turn that tells us the second half of this series is going to be very different from the first.

I'm confident it'll be just as much of a rush, though, with Snyder and Murphy's partnership staying the course. Murphy's work is pitch perfect for Snyder's story - the compositions are exciting, the people believable, the monsters horrendous, the backgrounds detailed. He knows when to go large, and when to focus on a telling moment.

Matt Hollingsworth underlines the mood created by script and linework with his colours, defining 'murky depths' as few creators have; and when he gets a chance to use the brighter side of his colour box, he grabs it, and makes the moment pay.

And Jared K Fletcher's no-nonsense fonts ground the science fiction thrills, even as things get ever wilder. Congrats, too, to editors Mark Doyle and Sara Miller for their obvious creator-wrangling talents, I'll be scanning the stands for more books bearing their names.

The one problem with this series is that it's bi-monthly - eight weeks feels like forever when you're waiting for a comic this good.  And according to the solicitations, The Wake #6 isn't out until 26 February - that's ruddy quarterly! I wish Vertigo had stockpiled issues and released them monthly, but no doubt there are good publishing reasons.