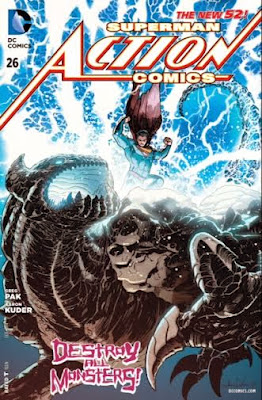 A monster has emerged from the ground in South America and the people are in a panic. Electrical engineer Lana Lang grabs a security guard's dropped gun and fires at the beast. She's scared, but excited. Onto the scene comes Superman, having traced the tectonic disturbances he felt in Metropolis.

Man battles monster, until a childhood memory has Superman realising that one man's monster is, well, perhaps something else. Any attempts by Superman to understand the behemoth are waylaid as military men appear, blasting the creature with rockets and siccing a super-squaddie on Superman - the Ghost Soldier. With phasing abilities, he's able to hurt Superman, but our hero is more concerned about the possibility that the besieged beast is confused, frightened and civilians are panicked.

It all comes down to this moment (click on image to enlarge).

Save the people or save the beast?

Writer Greg Pak gets to the heart of who Superman is with this action-thriller. Earlier in the New 52 continuity, Superman would have blasted the 'monster' to smithereens without a second thought. Here, he realises he has a tough decision, and I'm pleased with the one he makes ... it turns out that there's no 'or' in Superman.

There's more goodness in Superman's first interaction with the Ghost Soldier. Even as he's attacking Superman in the sky, Superman appeals to him to help the people below. The newcomer has potential as an antagonist, with his ability to cause Superman pain. I like Pak's cleverness in that instead of going the obvious route of making him from Legionnaire Phantom Girl's homeworld (well, obvious if you're a Legion fan!), Bgztl, he explains Ghost Soldier's phasing in a different 'Silver Agey' way.

I'm not entirely sure which country's military is setting Ghost Soldier on Superman, but odds are it's the US, who are constantly at odds with Superman in the current set-up. I was tired of it by month two of the New 52 and I really hope we're not going there again. Superman's been around the DCU for something like six years at this point, surely both sides could come to an understanding by now? Of course there's going to be initial suspicion and fear of a massively powered alien, but how many times must Superman prove that he's a friend?

I was puzzled by Superman's angry reaction to the military attacking the creature, given he'd just been throwing Lana's truck at it. Then again, the initial rampage was over, there was no immediate danger to Lana's team and the locals.

The dialogue and internal narrations of Superman and Lana work well, there's a naturalism that reflects Superman's humanity and their friendship. 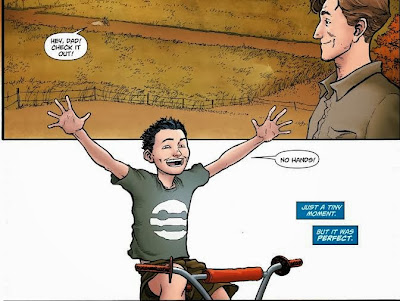 As a Smallville flashback arrived, my first reaction was: not again. The comic books and movies over the last few years seem to be forever showing Clark learning lessons as his powers emerge. Here, though, it's a harsh insight into humanity that informs Clark's heroic deeds in the present day. And it's short. And looks gorgeous. 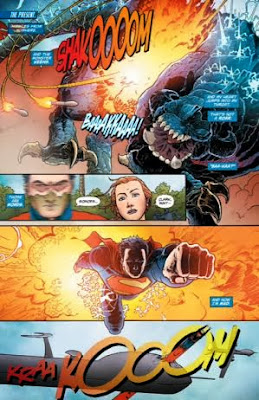 Every page looks gorgeous - illustrator Aaron Kuder's images burn up the comic with dynamism. The scenesetting and choreography is perfect. Superman looks amazing, every time. The monster actually has a bit of personality. Lana is full of smalltown grit.

And Ghost Soldier has a memorable design (no misdeeds will ever rival that evil haircut). The colours of June Chung show that brightness doesn't dampen the drama, and the flashback scenes have the gorgeous tones of memory, making for a great contrast with the disturbing event depicted.

The cover is by Kuder and colourist Wil Quintana, and it's a winner. With Kuder, Action Comics has the best regular Superman artist. I'm hoping he has a long run.