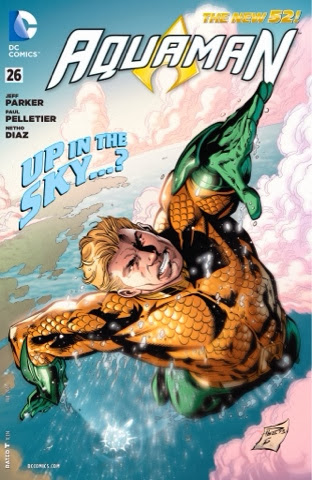 I almost didn't tackle this one, as I still have the previous six issues of Aquaman sitting around unread. I think I was put off by Geoff Johns reintroducing sweet little octopus Topo as a massive monster. But this is the series debut of Jeff Parker, a writer who never fails to entertain me, never throws in maimings to spice up an issue. I think, a bit of work for the delightful digital side of the company apart, this is his DC debut - have his sensibilities survived entry into the New 52? 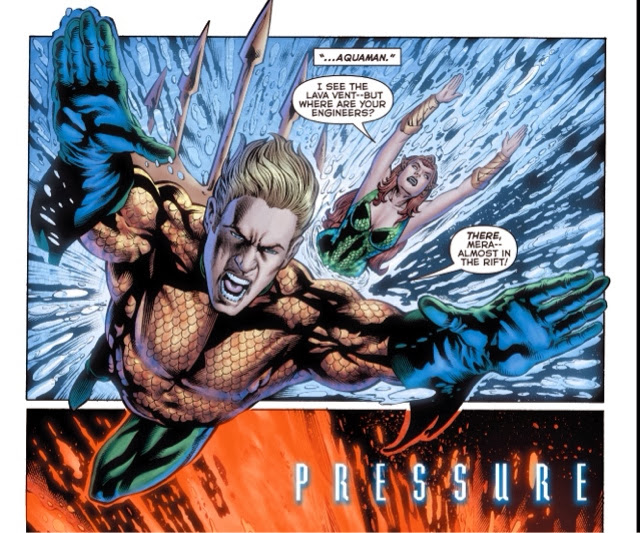 So far, so good. The story sees Aquaman and consort Mera rescuing an Atlantean scientific exploration crew from an exploding lava vent which could threaten the whole kingdom. Then it's back to Atlantis for a spot of court intrigue before Aquaman takes on a mystery behemoth off Iceland, with speedy transport courtesy of Mera's powers.

'Pressure' kicks against current DC Comics norms by including a couple of subplots. First, there's a team of explorers from the surface world who get gulped down by another monster (unless I'm reading this incorrectly, and it's not so much a subplot - subsea plot? - as set-up for the rest of the issue). Then there's a man named Evans, a reporter perhaps, or a government agent, who's wandering Aquaman's dryside home of Amnesty Bay and finding a wall of silence as he asks how to find the hero. 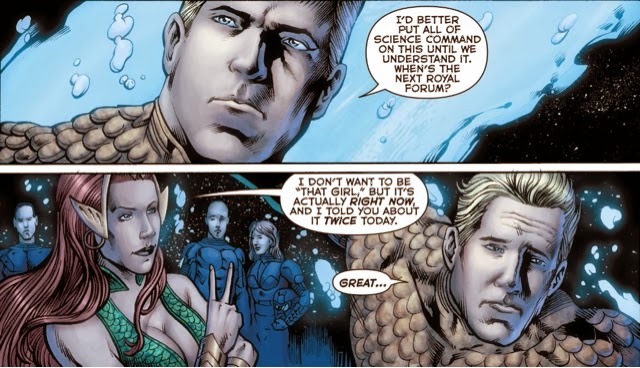 Parker, who won my heart with his smart, playful work on the likes of Agents of ATLAS and all-ages Avengers at Marvel, is a breath of fresh air. He respects Johns' set-up while turning the intensity down a notch. It's obvious people die this issue, but there's no dwelling on ugly images - for example, when Arthur stabs something with his trident, blood is suggested by the sound effect. And our hero seems less angry than previously, as if he has less to prove, even while he's a little out of his depth juggling superheroics with leadership.

Arthur's awkwardness makes for some amusing moments, and it seems Mera, a natural politician, might be the better leader of Atlantis. The Atlantean Council are an interesting bunch, reflecting a range of views as regards Aquaman and Mera, and I love that new transport trick we see here, the 'pressure launch' - it could do with a snazzier name, though. The Hard Water Express? The Atlantis Attack?

I'm glad Paul Pelletier is around to welcome Parker, as his thoughtful compositions complement the pacy script. Pelletier doesn't handle the whole issue this time, with Netho Diaz stepping in to kick off proceedings, and he proves as adept at conjuring up smalltown Maine as exotic Atlantis. Both artists are good with the massive beasties, and their facial expressions always hit the mark. Ruy Jose and Sean Parsons add extra definition with their inks, while Andrew Dalhouse and Wil Quintana's colours draw the eye. And Dezi Sienty's lettering is as fine as ever.

I do have a couple of problems with the production - nothing massive, both could be easily fixed in future issues, so I'm mentioning them in the hope someone in DC Editorial sees this. Firstly, Atlantean interiors are swathed in red and blue washes, with added glare, presumably to lend an eerie, or perhaps SF, atmosphere. In fact, they make things feel rather flat, and take away from the sharpness of the linework. 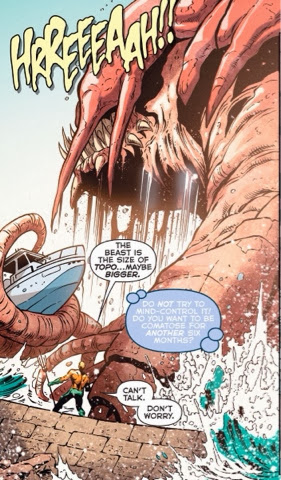 Then there are a few bubbles coloured differently to indicate a telepathic back and forth between Mera and Arthur - I'm reproducing one here and it's not too tough to read. That's digital comics for you. In print, though, serious squinting is required (and yes, I bought this issue twice for the sake of a review - talk about more money than sense!).

A nice touch is that this issue is dedicated to classic Aquaman illustrator Nick Cardy, who died recently at the grand old age of 93. I think he'd like that.