It's still Zero Year, when Bruce Wayne was developing his Batman role, and he's fighting Dr Death. A brilliant medic self-transformed into a monster able to control his bone growth, he wants revenge on Wayne employee Lucius Fox for perceived slights. And if he gets to take down Bruce Wayne along the way, all the better. Before that, though, there's something he wants to tell Bruce, a taunt he wishes to flesh out.

We never learn what that is though, because a very satisfying back and forth ends with Dr Death off the playing board, with the arrival of Jim Gordon proving to be the game changer.

A day later, Bruce awakens after being badly hurt by Dr Death, chained to a bed. Not by some villain, but by Alfred, who knows his friend will want to get out on the streets immediately, get back to dealing with the ongoing Riddler problem. Gordon shows up at Bruce's bedside, but rather than gratitude for the intervention that saved his life, Bruce is hostile; he's been remembering the afternoon of the day his parents died. An afternoon in which, in an instant, he went from believing Jim Gordon was a true guardian angel, to considering him just one more piece of Gotham scum.

What happened? It becomes evident - to young Bruce, at least - that Gordon is on the take, receiving tributes for protecting Gotham's small businesses. And one of the gifts is on display today - the iconic overcoat Gordon wears. Bruce confronts Gordon with the story, and his reaction seems to prove the truth of Bruce's tale ...

Oh Scott Snyder, how you play with us. I'm not buying this. There are aspects of the Batman legend that no writer in his right mind would change, and Jim Gordon's status as Gotham's Last Good Cop is one of them. Kids misunderstand, memories play tricks ... there'll be an explanation. Gordon will soon be redeemed. It's not like any of us have ever looked at Gordon's scabby old Mac and thought, now that's one 'beautiful trenchcoat'.

Meanwhile, we have a valid reason for the early tension between hero and cop. What I'm not understanding is where a flashback page, with a horribly bearded Bruce imperilled in a desert bathysphere thingy, fits in. It follows on from a longer flashback last time, but that went over my head too. I'd appreciate speedy clarification and dispatch of this side story. We're already in a flashback tale, and too many flash-flashbacks risk weakening the brew.

The 'present day' tale is engaging enough that I want to stay with that. Odd insights into Bruce's boyhood work well, but I've never found stories of Bruce's training days interesting. The Waynes were murdered, Bruce perfected mind and body, Batman debuted - let details of the men and women with whom Bruce studied stay hazy. Or at least stick 'em in their own stories, so I can avoid them. 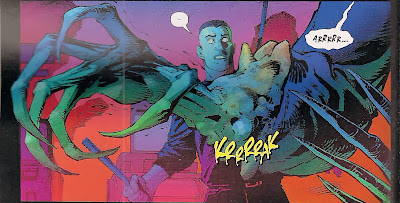 Snyder writes a great fight, with the Dr Death back-and-forth one of the most engrossing tussles in a while. With artist Greg Capullo, Snyder has recreated a forgotten Golden Ager as a truly frightening grotesque. I look forward to his return.

His Bruce is equalling compelling, a fascinating mix of driven creature and little boy lost. The only thing I don't like is Bruce's comic book cussing. I find *@$% visual migraine at the best of times, never mind when it's coming from the mouths of supposed heroes. Batman has flourished for 75 years without us being told that he uses the odd profanity, let's not start now.

Back on the plus side, thank you Scott Snyder for introducing the notion of Alfred bringing Bruce his 'formal wear'. That raised a needed chuckle.

Capullo's touch with emotions is as sure as his facility for the more obviously dramatic moment: the wonder in the boy Bruce's eyes, the apparent shame of Gordon, the mania of Dr Death ... they're all there on the page, with the inks of Danny Miki adding extra vibrancy. The pages are coloured to perfection by FCO Plascencia, who proves that Gotham doesn't need to be swamped entirely in browns and blacks to unsettle - the bold, bubblegum hues that characterise Zero Year add an uncomfortable air that perfectly complements the work of Snyder, Capullo and Miki. 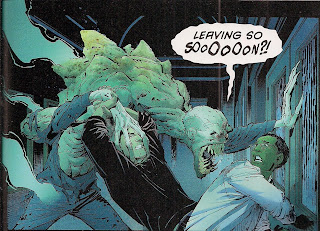 A shout-out, too, to letterer Steve Wands, who scans the script for the emotional beats and realises them in print, wobbling a word here, shaking a sentence there. He always settles on the right font for the moment, and isn't afraid to go old school freehand when it helps the story.

For almost 20 years we've had a Batman driven by the movies, a creature of the night whose alter ego is more a mask than the hero. But for two years now, Snyder, Capullo and their creative partners have been building up Bruce Wayne, showing us the man behind the bat. With Zero Year they're continuing to enrich Bruce by focussing on moments from that first year that could do with some extra detail - zeroing in, you could say. And they're hitting the mark every time.
Danny Miki dr Death FCO Plascencia Greg Capullo Scott Snyder Steve Wands Zero Year