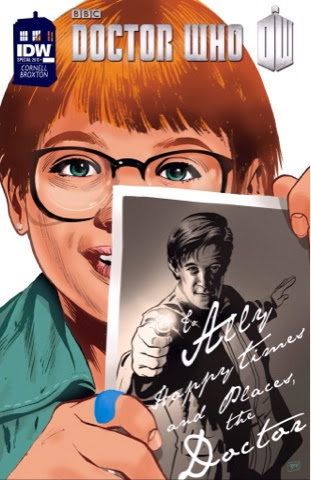 Thrown through an anomaly, the Doctor finds himself on a familiar world. It's Earth, but not his Earth - it's a world in which everyone recognises him. Not, though, as the Doctor, but as the actor Matt Smith, who plays the Doctor on a television show that's celebrating its golden anniversary. 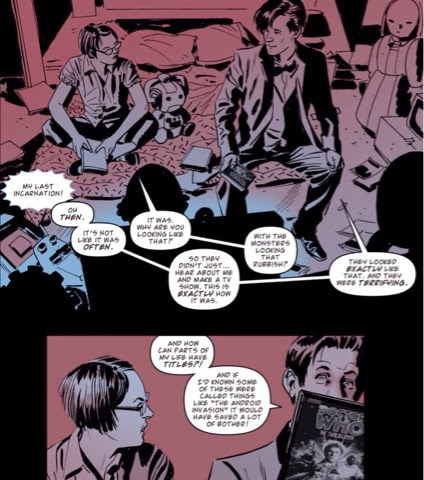 As is his wont, the Doctor soon makes a friend, 12-year-old Ally, a massive fan of the show who takes some convincing that this is the real thing. Her mother is quicker to accept - mums are cool - while the BBC production team can't believe the money they're suddenly saving on SFX.
Oh, and is that an actual Cyberman?
As Christmas gifts go, this is one I don't want to send back. Paul Cornell and Knight & Squire partner Jimmy Broxton produce a pacy, charming, great-looking tale of the Doctor that, for me, is the best thing to come out of the 50th anniversary. The metafictive nature of the narrative allows for some good gags and commentary, but never overwhelms the central idea of what the hero means to his fans. There's also a well-handled, utterly non-cloying strand about finding the hero within yourself - Ally is more excited to meet Matt Smith than the Doctor, but it takes both men to inspire her to solve her own problems.
As a writer for the reborn Doctor Who series, it's no surprise Cornell captures the current model so well, and his Smith certainly seems true to the chap we've seen interviewed so many times. Ally and her mother are recognisable as contemporary Brits, not easily impressed, but ready to embrace wonder. And the Cyberman, well, has as much personality as you'd expect from a Cyberman.
One of my favourite scenes in 40 pages packed with delightful moments addresses the loss of an especially good companion. 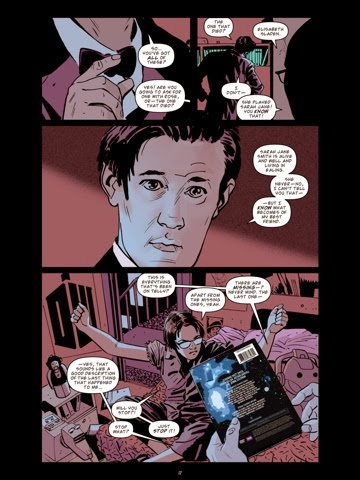 It's a typically elegant, emotional writing from Cornell, wonderfully sold by Broxton, who makes every page wonderful to look at with his fine storytelling. His Doctor/Smith is spot on, without ever looking photo referenced, and his Britain lives and breathes 2013. Cybermen only truly look good in packs, but Broxton's solo soldier has real presence on the page. The artist colours his own work, making the mundane look simply lovely and having fun with the special effects.
While this story could be done on TV, the comics page serves it better; on television, the conceit of real Doctor meeting the person portraying him and interacting with production staff and sets might 'break' the show, foregrounding the fictional nature of Doctor Who. As a different medium, comics puts alien and actor on the same level, allowing us to enjoy the story without feeling that one is more real than the other.
Whether you're a fan of current TV Doctor Who or, like me, someone who wishes the show would stop obsessing over its mythology and just get on with telling stories, I recommend this special - the last Doctor Who story published by IDW as the licence goes elsewhere - without hesitation. Who wouldn't enjoy it?
Doctor Who Special 2013 Jimmy Broxton Matt Smith Paul Cornell