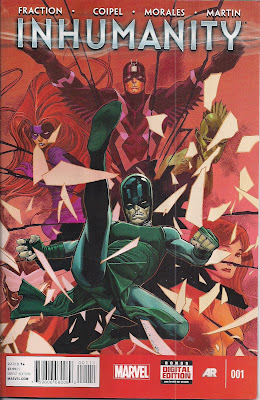 Attilan has fallen. The floating stronghold of the Inhumans has blasted apart above the planet, raining down Terrigen Mists to transform humans with Inhuman DNA. New super-powered beings are popping up all over the world ...

... or so we're told. We're told an awful lot in this continuation of recent Marvel event Infinity. Our storyteller is Karnak the Shatterer of the Inhuman royal family, himself shattered by the loss of Attilan. He can barely believe that his king, Black Bolt, has colluded with mad, throne-fancying brother Maximus in a Hail Mary pass to thwart the plans of the mad god Thanos. It seems Thanos has an Inhuman son, and in order to disguise said son's whereabouts, Black Bolt presumes to explode the lives of who knows how many people on Earth, people who otherwise would live out their days, blissfully ignorant of their irrelevant Inhuman heritage.

Of course, Black Bolt is as mad as his brother, happy to preside over a system that sees its healthy young made over into monsters. Oh yes, the odd person emerges from the Terrigen Mists ritual with the ultimate hair extensions, pleasant weather powers, or bulletproof skin, but as many again turn out to be goat-legged people, or fishmen, or green bats. And even the ones who keep their human forms while getting useful powers had to face the terror of the mists, as their elders gambled with their futures.

So yeah, Black Bolt's not the brightest button in the box. If he were smart, he'd see that Thanos isn't going to abandon his search for his son because it's suddenly that much harder; he's simply going to kill everyone in his way, what with his worshipping Death and all. Black Bolt has pinned a target on the backs of potentially millions of Earth folk.

What's more, Black Bolt has apparently committed suicide, killed everyone on Attilan and left his wife, Medusa, and Karnak to pick up the pieces.

So should you pick up this book? Well, if you need an Inhumans primer, and a recap of their recent history, this is your dream comic. I find the ever-expanding factions of Inhumans and convolutions of their history insanely boring, and kept hoping this book would move forward. Instead, it moves down, as Karnak throws himself off a building rather than help clean up the mess his people have caused.

Nutters, the lot of 'em.

Still, writer Matt Fraction is a bright fella - perhaps he's going to engage with all the disturbing aspects of the Inhumans. As a subject who'd rather be a citizen, I reckon Black Bolt's tyranny would be a good place to start.

I like a good recap, it's useful for those of us who refuse to be sucked into every bloated crossover. This issue goes a little too far in the other direction, as Karnak the Prattler's bizarro Jackanory becomes increasingly hard to bear. I'd have liked less recap and more idea as to where this storyline - Inhumanity is spawning the usual specials and tie-ins and mini-series - is going. Fraction's best moments involve the non-Inhumans, with Tony Stark's 'let's brainstorm' attitude appealing and the Beast's pragmatism a blessed relief. The brightest person in the book is Black Panther, who suggests that letting the man who can find the weak point in anything - absolutely anything - scrawl on the glass of his prison cell may not be a good idea. 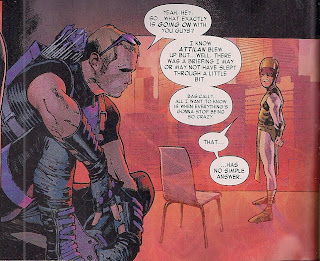 Fraction also has Hawkeye on hand, and it's deeply weird to see the sad sack persona from his solo book carried over here - you might think Clint would at least put on some front when he's with his supposed peers.

Medusa is her usual haughty self, unable to consider the big picture because of her obsession with Black Bolt, her husband and master. Didn't she used to be a Lady Liberator?

The art is inconsistent, with several art teams, chief among them Olivier Coipel and Mark Morales; it's generally OK, though some parts looked rushed. Crystal and Spider-Woman, for two, have no speaking role, but here they are, one a weird doll, the other a bearded lady. 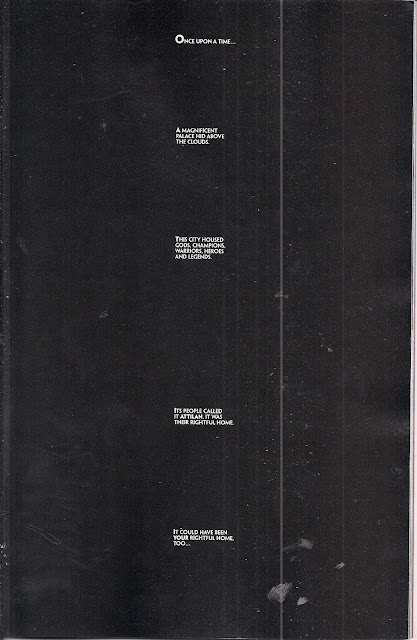 The oddest page of 'art' is the first page. Initially, I thought this was another Jonathan Hickman-style waste of a page, but the words demand images - how can we appreciate the 'magnificent palace' that was Attilan if we're not shown it? Over the turn, we see the place blowing up, but without establishing images, the money shots lack currency.

Did the pictures drop off at the printers? Or does Marvel really think this is the way to grab readers?

I realise this review has been even more rambling than usual - there's nothing much in the story to latch onto. Yes, I'm not delighted that the usually super-focused Karnak is reduced to a suicidal drama queen, but he'll no doubt be fine within months. So let's end on a juvenile note. A bit of silliness more silly than Tony Stark having a 'Hulk-proof cell' that he can't actually get into himself in time to stop Karnak becoming something to be swept off the sidewalk.