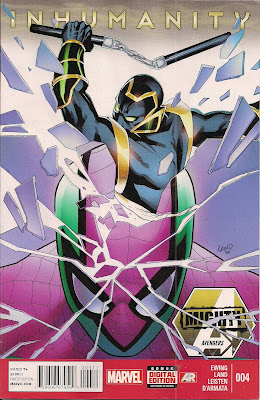 Mighty Avengers? Not if this logo is anything to go by. If you actually spot it on the comic store shelf - the bottom right placing virtually guarantees cover-up by the next title along - that tiny roadsign thing says the Apologetic Avengers. The Meek Avengers. The Namby-Pamby, Move Along, Nothing To See Here Avengers.

The useless branding does this comic a terrible disservice, because it's the best Avengers series around. The characters are a fascinating bunch, a mix of fan favourites and obscurities waiting to be given new life. The first three-parter was an Infinity tie-in which leapfrogged the dull event book by being a tightly focused tale whose resolution depended on intelligence and teamwork, rather than a deus ex machina.

As for issue #4, it's another hugely entertaining read which mines Marvel history without demanding the reader knows it all already. It loses a point or two for reviving the flaccid Ronin identity from Brian Bendis' Avengers run, but the nature of the wearer means it's not going to be a permanent thing - writer Al Ewing is using the role as a story point, and who knows, along the way he just might prove Ronin isn't the dead duck it seems.

Once again, Ewing is in crossover territory, tying into the Inhumanity storyline, which has people worldwide revealed to be Inhumans and developing powers. Mighty Avengers introduces us to a corporate spy named Barbara, shiny new codename Quickfire, who's out to secure some Terrigen crystal for the dodgy Cortex Incorporated from the Inhuman city of Attilan. The community has fallen to Earth and SHIELD is trying to raise it from the Hudson River.

Meanwhile, Luke Cage is putting together a new branch of the Avengers with Spectrum (Monica Rambeau), White Tiger (Ava Ayala), Power Man (Victor Alvarez), the Superior Spider-Man (ssssh Doctor Octopus), Blue Marvel (Adam Brashear) and the mysterious Spider-Hero (Google away if you wish to be spoiled). Luke is basing the Mighty Avengers at the Gem Theatre in Times Square, his old hangout from his days as a Hero For Hire with Iron Fist. Current Avenger the Falcon has turned up, hoping to join the crew, while Luke's wife Jessica Jones and their daughter Danielle are also on hand, along with movie-mad Dave Griffith, the Gem's co-owner.

Most everyone's getting along swimmingly, with the only fly in the ointment being Spider-Man, who wants to run the show. This obviously isn't the Spidey most of them know, but the assumption is that he's changed, not that he's an imposter. 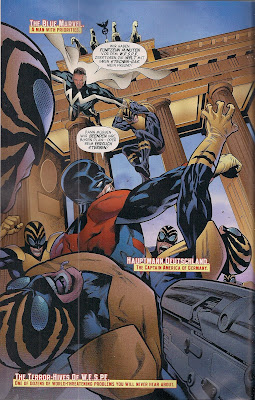 Blue Marvel isn't at the meeting, he's in Germany fighting bad guys with Hauptmann Deutschland. And Spider-Hero is off having a pointed conversation with black magician Kaluu which hints at his true identity (click on image to enlarge).

There's no big crisis for the heroes to tackle this time out, but there's so much going on that I only noticed after the fact - Mighty Avengers #4 is a stealth 'day in the life issue'. The character dynamics as Luke organises the new team are a lot of fun, and little touches such as the return of Dave aka DW Griffith, whom I've not seen since the Eighties, and the inclusion of 'Captain Germany' made me smile. The latter's German-set team-up with Blue Marvel is a playful dig at Marvel comics which can't imagine anything interesting happening beyond Noo Yoik ie pretty much all of them.

A highlight of the script is the Falcon, who's keen to point out that he's not actually Captain America's official sidekick. 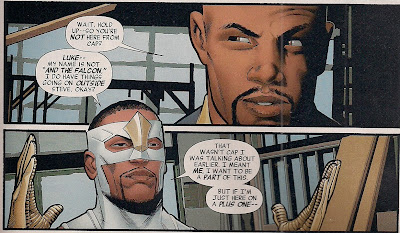 And I love that he's going to get some page time here - it's awfully crowded over in those Jonathan Hickman books.

The least interesting aspect of this issue is Quickfire and the Attilan business - Marvel has enough mutants already, this influx of mutants in all but name risks becoming tiresome fast. But again, Ewing is an excellent writer, so I'm happy to see where he goes with sneaky Barb.

The artwork by Greg Land and Jay Leisten is, for the most part, very effective. The first couple of pages look a little too photo-referenced ... 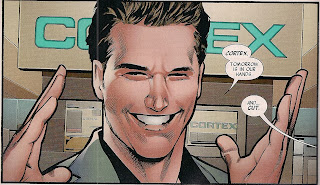 ... but after that the art relaxes and Land and Leisten give us an enjoyable visual ride. The Germany page, above, is especially good, I really like the translation of New York to the comics page and baby Dani is all kinds of adorable.

And look at that cover, talk about striking.

If you've not yet tried this series, give it a shot, you may be nicely surprised. If you can find it.
Al Ewing Cory Petit Frank D'Armata Greg Land Jay Leisten Mighty Avengers #4 review Superior Spider-Man