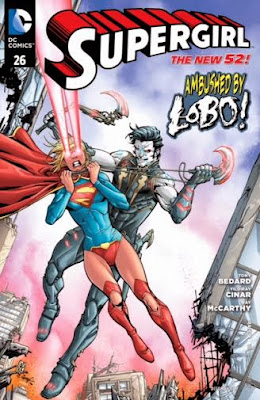 It's new creative team time, as writer Tony Bedard and artists Yildiray Cinar and Ray McCarthy bid to steer the unsteady ship that is Supergirl into calmer waters. Well, eventually, anyway - we know that the next storyline has Supergirl give in to rage and become a Red Lantern, the idea of Red Lanterns writer Charles Soule. So before they get to make a huge impression on Supergirl, the creators are beholden to another whose own characters are a million miles from what Kara Zor-El should be. A blood-spewing, hate filled monster? No thanks.

Here, though, we get a glimpse of Supergirl as she should be, a powerful young adult not too proud to ask for help, a hero who extends the hand of friendship before clenching it into a fist. Unfortunately, the newcomer she bids to befriend is Lobo, fast and furious space mercenary, who turns up outside underground research facility The Block, where Supergirl has asked super-boffin Dr Shay Veritas to give her the once over. Lobo wants a steer from Veritas towards an imposter Lobo, having been told by a contact that she keeps tabs on aliens. Supergirl is willing to listen to his story, knowing that like her, he's the last survivor of a civilisation. Lobo though, doesn't want to talk, and tries to go through Kara. Big mistake.

Putting aside the direction in which we know Kara is heading, this is an impressive debut from Bedard and co. Bedard recaps the horrors Kara has faced, making her mix of despair and anger make sense, but pulls down the emotional walls we've previously seen. He has Kara reach out to Veritas, even hug her, and we see that she's already tried to reconnect with Earth friend Siobhan after her supposed one-way trip into space (click on images to enlarge). 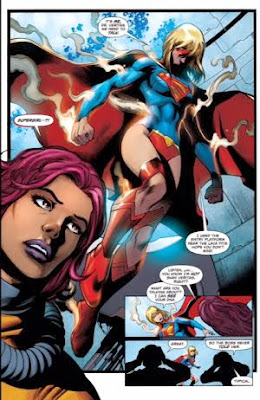 I wasn't thrilled that the first time we see Kara she's in the oft-seen angry pose, body tensed and eyes burning, but that's almost certainly more to do with where Bedard's been told to take Kara than his preferred approach; before the Red Lanterns business was announced, perhaps before even he knew it was coming, Bedard spoke of wanting to take Kara to a happier place. Hopefully he'll get to do that before too long.

For now, he gets to add to the mystery of Veritas - who I don't trust - by showing the creepy oddness of the 'uniform' she has staff wear, and introduces the supposedly 'true' Lobo to the New 52 with style. His gorgeousness apart, he's not a million miles from the original Lobo, before he got wacky (and entertaining). There's a surprising hint that he's rather taken with Kara - I do hope she doesn't fall for another bad boy/insane alien. Bedard also drops in a line apparently telling us how Superman first met Veritas, something that was absent when the Block first showed up in his book.

I'm not delighted that Kara still has ill-feeling towards Superman, telling Veritas that he's 'a sanctimonious jerk' - yeah, he has indeed been generally useless so far as supporting her is concerned, but the ending of the H'el story, with the loss of Kon-El, showed a spark of warmth between the pair. 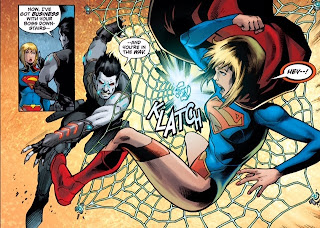 Former Legion of Super-Heroes penciller Cinar demonstrates his storytelling flair, from the opening panel with its close-up of Lobo's grimacing gob, to the final page shock for Kara. In between, aided by the sharp inks of McCarthy and eye-popping colours of Dan Brown, he gives us a version of the DC universe that's rather enticing - the vibrant Bangkok of the opening scene is somewhere I'd happily see Kara spend time. His take on the new Lobo design, distractingly daft 'tear' skin marks and all, works, while his Veritas has the requisite intelligence and a softness that belies her true evil (just wait and see!). Best of all, he gets to draw Rhialla, an extraterrestrial manipulator with er, a four-pack, which isn't something often seen in DC Comics, even New 52 ones; fear not, though, they're family friendly double-decker boobs.

As for Kara herself, she looks wonderful - determined, smart, open ... this is a Supergirl who has more sides to her than anger.  Even that looming moment above, while not to my taste, looks amazing. And extra points to Cinar for making the horrible crotch shield larger than previously - perhaps he could expand the area issue by issue until we get actual shorts.

So, a promising new beginning for Kara. There's a diversion coming, but Bedard and Cinar really may be the people to put Kara on the road to greatness.
Dan Brown Ray McCarthy Supergirl #26 review Tony Bedard Yildiray Cinar