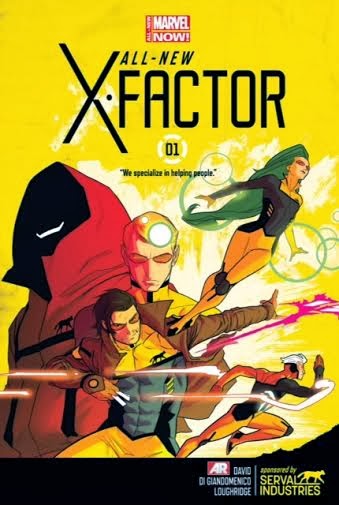 Never mind All-New X-Factor, Marvel should be calling this Brand-New X-Factor because it's all about the brand. And that brand is Serval Industries, whose sponsorship message is on the cover and pervades the interior. You may have noticed the corporation's logo lately in such books as Mighty Avengers, and here we find out what they're all about. In the words of mutant mistress of magnetism Polaris (click on image to enlarge):

Lorna Dane needs a new gig after the closure of the X-Factor detective agency and she's been recruited to lead a corporate superhero team. This issue she persuades errant X-Man Gambit to accompany her to Serval's Virgina HQ for a meeting with CEO and president Harrison Snow, who asks him to consider signing up. 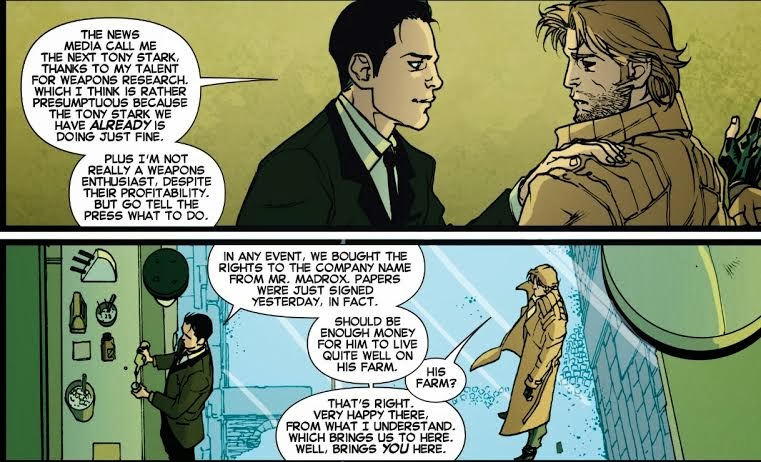 While Gambit has suspicions - 'How do I know you're not evil' - he agrees to go on a mission, either out of curiosity, boredom, respect for Lorna or some combination of the three. Somewhat keener is the speedster Quicksilver, who's shown up at Serval while Polaris was grabbing Remy LeBeau. Claiming to be concerned for half-sister Lorna, who most recently attacked him in a drunken haze, he's ready to sign up. Pietro proves massively useful on a mission to rescue mutants being experimented on by one Dr Terrance Hoffman, a sortie which provides a cliffhanger which will mean more to students of mutant minutiae than it does me.

Gambit is our point of view character, as wary of corporations as the average comic book reader - in Marvel especially, the likes of Roxxon and Brand are fronts for nefarious activities. And it makes perfect sense, what with Remy being a thief, unlikely to take anyone at face value. It's his compulsion to nick things that gets him into trouble with Wolverine at the start of this issue, in an amusing scene centred on Gambit's attempts to steal an interdimensional portal thingie. The diminutive death dealer has problems with Remy's own hobbies. 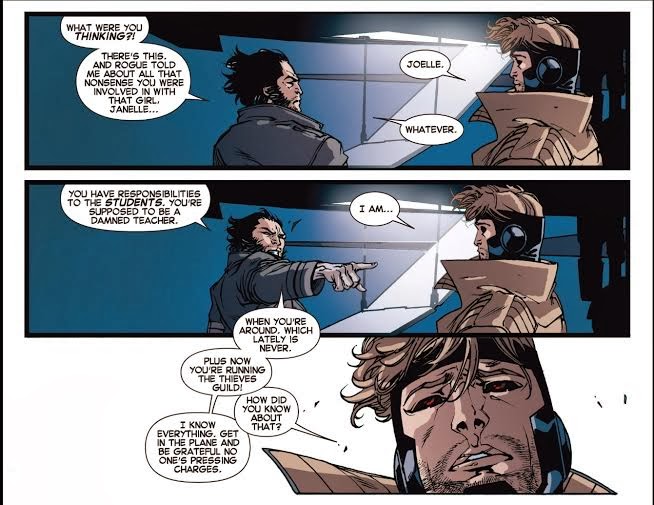 It's fun to see Gambit chastised, and heartening to note that while he is, to put it kindly, a rogue, his responsibilities as an X-Man obviously mean more to him. How a new gig with Serval will fit in is anybody's guess - mine is that Logan ('I know everything') has engineered his encounter with X-Factor to get a man on the inside, because you can bet he's at least as suspicious as Gambit.

Pietro's inclusion promises to make for fascinating dynamics. While he's been on an X-Factor team with Lorna previously, she's always been part of a couple with Havok. Now she's more her own heroine, with time to get to know the semi-sibling she considers pretty much evil.

Other members are set to join the team - you may have spotted former New Mutants Doug Ramsey and Warlock on the cover. If you did, bloomin' well done to you, because Warlock's inimitable form is hidden by robes and that blond kid with the bug eyes could be anybody.

Ah yes, those weird eyepieces - what are they all about? Probably some communications and visual spectrum device, but they are awful. Lorna, especially, looks hideous, like a bad Marionette cosplayer. This is a woman who has worn two of the most striking costumes in comics, yet here she looks like a skier made over by the committee not good enough to design the elephant. Or perhaps she's still inebriated. And Pietro is just as unlucky, with his traditional sleek, lightning bolt-emblazoned affair replaced by a blocky, eye-hurting nightmare. At least Gambit's new look is disguised by his Linus-like addiction to that stinky old overcoat. Whatever their many specialisms, it's apparent Serval aren't known for good design. 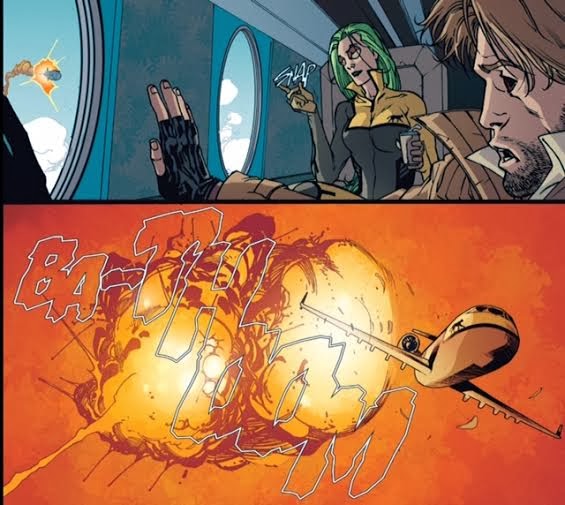 Di Giandomenico, with his expressive line, is the perfect partner for David, whose script is typically sharp and sassy while never crossing over into the realm of irritatingly clever and self-conscious. That David makes me like the horribly conceived Gambit for an entire issue is akin to a miracle; I can't wait to see what new character interaction will emerge once the entire team is onboard.

New characters Snow and public relations guru Linda Kwan (who looks to be sporting a false nose) seem like good folk, and I'll be thrilled to bits if Serval doesn't turn out to be evil, which may well be the case, although as this is David writing, he's likely triple-bluffing us at least. Oddly, while I hate the X-Factor togs, I rather like the monogrammed suits Kwan, Snow and security chief Teddy wear - put the heroes in them!

A tip of the hat also to Marvel's Manny Mederos, for a sophisticated production design that serves the story, interior letterer Cory Petit, and Kris Anka and Jared K Fletcher, who drew and lettered the cover respectively. It's great work all round.

As opening chapters go, this is excellent - David introduces his characters one by one, doling out enough gobbets of information to give newer readers a leg up and reel veterans back in, while Di Giandomenico's appealing art is a window on a refreshingly crossover-free corner of the Marvel Universe. Whether you can't get enough mutants, or you're fatigued by the ever-expanding exploits of the more popular X-kids, give this first issue a try. And if you don't enjoy it, well, I'm sure the lovely people at Serval will arrange a refund.
All-New X-Factor #1 review Carmine Di Giandomenico Leigh Loughridge Peter David