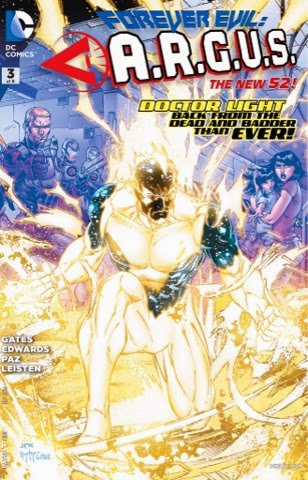 Set during the Forever Evil event, this mini-series follows agent of ARGUS Steve Trevor as he tries to protect a world without Justice Leagues from the Crime Syndicate of Earth 3. Figuring that his best bet is to free the heroes from wherever they've been imprisoned, Steve makes a deal with the Morai - the Fates of Greek myth. They get the emotion of passionate memories involving his former love Wonder Woman, he gets transported to a secluded cabin where the man behind Firestorm. Professor Martin Stein, is being assaulted by Killer Frost. A mystical sword helps Steve hold his own, before Stein intervenes, taking Frost out.

For reasons fully detailed in writer Sterling Gates' excellent Killer Frost one-shot, the villain teams up with the good guys as they try to work out how to save the Leagues. Soon, Stein is explaining - with the aid of amusingly bad doodles - that the heroes' imprisonment inside the Firestorm Matrix may mean the end of the world. 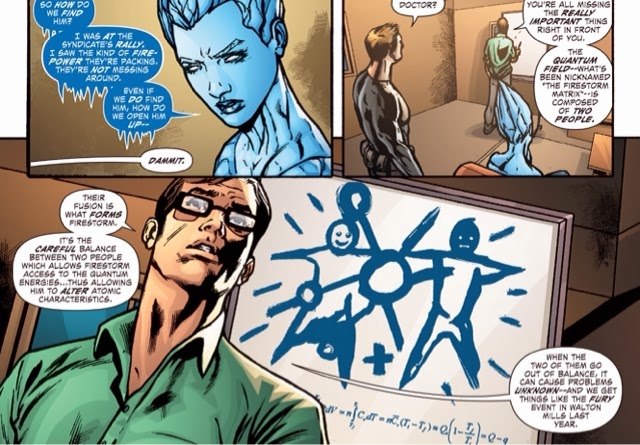 In Washington DC, Steve's assistant Etta Candy prepares to enter the mysterious Green Room. She believes it's simply the President's panic room, but an eerie voice tells her it's much, much more than that ...

And reluctant hero Dr Arthur Light is back from beyond and so powerful that he accidentally fries an ARGUS agent who was escorting his wife and children to safety. Confused, he bounces around the world until he lands by a bunch of mysterious costumed people with an agenda.

It's a busy issue, but never feels crowded as writer Sterling Gates has a whale of a time forging links between existing characters, introducing new players and filling in the history of the New 52 DC Universe. He makes Steve Trevor a more compelling character than in most previous incarnations, indicating that he's had many an adventure as Diana's partner. This makes it believable that he can take on supervillains all by himself, albeit with the aid of special weapons.

Martin Stein is pleasingly strong willed here, and I'm chuffed to bits to see it confirmed that as suspected, Dr Light's wife is Kimiyo Hoshi, the post-Crisis, heroic Dr Light. And other students of ancient DC texts will be as thrilled as I am that the Morai refer to Steve by the full name of 'Steven Trevor Howard' - a nod to a Seventies continuity fix which saw the deceased Steve come back from the dead, dye his hair and go by the name Steve Howard (in homage to the actor ... oh, you got that). It adds nothing to the story, but at a time the higher-ups at DC are denying DC's illustrious history, it warms my heart to see that not all creators are so short-sighted.

There's even a mention for obscure Firestorm baddie Byte of Bug & Byte 'fame', which is relevant to the action.

Neil Edwards' compositions and figurework are strong, making the story a pleasure to read - he'd likely by a bigger name were he showier; as it is, I'm very happier with the work of Edwards, here inked by Jason Paz and Jay Leisten. Favourite things include their spooky, lumbering witches, handsome, heroic Steve and that flashback involving Steve, Diana and a murderous man-beast. Nathan Eyring's colours only add to the drama, while Taylor Esposito does a cracking job with the lettering.

The enticing cover scene is by Jeremy Roberts, Rob Hunter and Gabe Eltaeb but, as with the interior art, it's a shame we don't get a good look at Doctor Light's new visual, his power display continually obscuring him; still, I expect that will be rectified soon.

For now, though, I strongly recommend this inventive, entertaining Forever Evil side story. It's among the best things coming out of DC's superhero line and I only wish it were continuing. If I can convince you to try an issue, maybe that will happen.
Forever Evil: Argus #3 review Gabe Eltaeb Jason Paz Jay Leisten Jeremy Roberts Neil Edwards Rob Hunter Sterling Gates Taylor Esposito