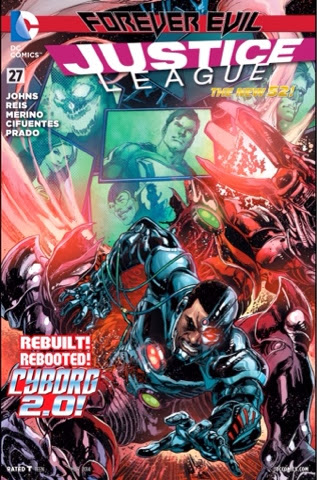 Old hero gets a scrub-up? Check.

Old-time supervillain is the voice of reason. Check.

Props from previous comics continuity show up in the background? Check.

Characters created by someone else are revived only to be slaughtered so the bad guys seem a real threat? Check, check and check.

And utterly predictable. Just once I'd like to see Geoff Johns kill off a hero created by him. But as that's not going to happen, someone else is going to have to slay Stargirl. 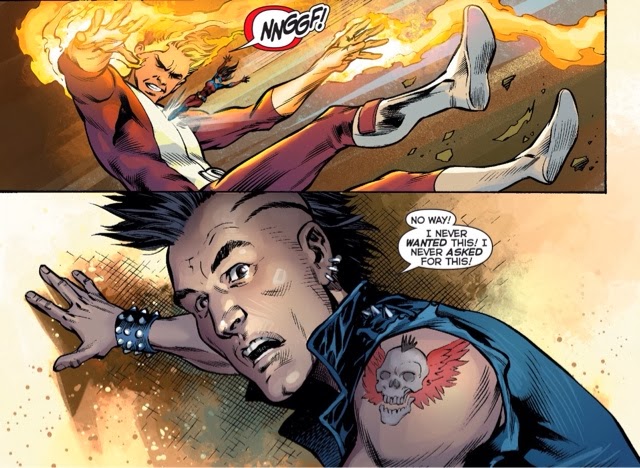 Which would be a shame, as I've always liked her. I liked Scott Fischer, too, and was sad
when creator Paul Kupperberg killed him off as part of a deck-clearing mission at incoming Doom Patrol writer Grant Morrison's request. But that was a creator offing his own character, with at least a semblance of a purpose. Here, it's just Johns killing off Negative Woman, Karma and Scott Fischer (his superhero name changed from Blaze to Scorch, which seems pointless given Scott Fischer never went by anything other than Scott Fischer) to show, yet again, how 'badass' Crime Syndicate members Atomica and Johnny Quick are. 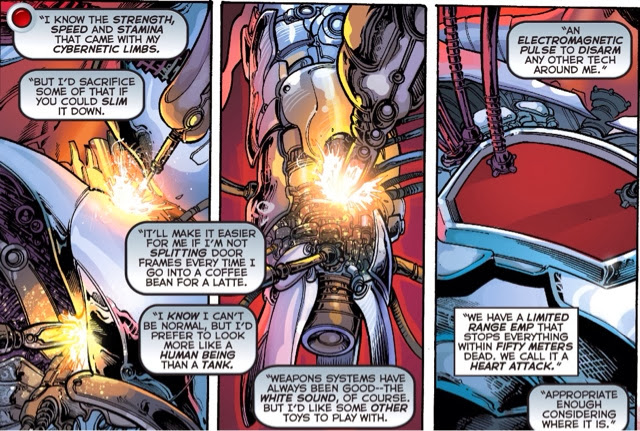 And it's all just padding, before this issue's main event, the delivery of a new body to Vic Stone, whose cyborg bits have gained sentience and become the bad 'bot Grid. Scientist dad Silas doesn't want to make Vic over once more, feeling guilty that he did it previously without his asking. But Vic's pleading, and the arguments of colleague TO Morrow - in the old days, one of the JLA's greatest foes - persuade him and soon the three are in the Red Room's Red Room. There, every sci-fi weapon Vic desires is ready for clipping on - seriously, he gets a brand new, slimmer body in less time than it takes to grab a bargain at World of Quid. Its a shame he doesn't snag Royal Flush gang member Ace's suit, it's just sitting there, and rather natty.

After a hug with Dad, it's a cross country trip to find robotics expert Dr Will Magnus in order to get some cyber-help against the Grid, who's coordinating the Syndicate's world-conquering plans. Along the way, the new Cyborg stops off to help regular folk, which is actually nice to see - reading this crossover so far it's seemed that the world is populated by no one but superheroes and villains.

Things we learn this issue: Argus scientists must swear an oath before being allowed to work in the Red Room. Karma and Scott Fischer seem to have died previously. And Karma - aka Wayne Hawkins - really is Basil Exposition, with Scott Fischer his apprentice.

Phew, he could talk the Syndicate to death.

The layouts by Ivan Reis are eye-catching and do the job, and the joins between inkers Jesus Merino, Joe Prado and Vicente Sifuentes are hard to spot. The pages look lovely, even the ones featuring the ridiculously clad  - even for a comics character - Johnny Quick.

I'm a bit bored, though - Forever Evil has been going on for a few months, has a couple more to run and there's not a great deal of forward movement. DC are teasing us about amazing things to come afterwards, but so far this simply seems to amount to more villains being elevated to 'heroic' roles. As Chief Creative Officer, Geoff Johns is guiding the DC universe into ever darker waters. Sadly, this darkness is nothing but dull
Forever Evil Geoff Johns Ivan Reis Jesus Merino Joe Prado Justice League #27 review Vicente Sifuentes