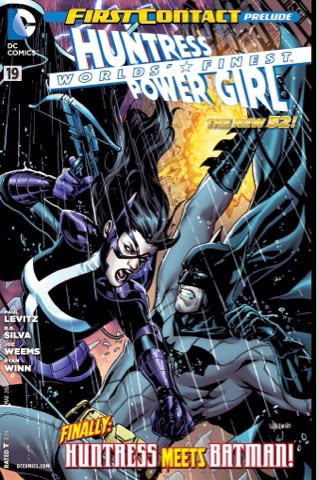 Power Girl has two big problems: her powers are switching off at random times, and her tech company's been stolen from her. As this issue opens, Karen is tackling the second of those issues by diamond hunting at the bottom of the ocean, getting the funds to pay lawyers to win Starr Industries back.
As for the power issue, a week without problems has her feeling complacent, so why not fly pal Helena Wayne around Central Park on her arrival back in New York? Whether Hel wants it or not ... ... and it's very much 'not' as Karen's flight cuts out, leaving a PJ-ed Helena bruised and grumpy. But still Karen doesn't accept that she should ask for help from some other hero, perhaps a fellow Kryptonian, and the pair part. While Huntress grabs some clothes and breakfast, Karen grabs a lawyer who is less than 100 per cent optimistic that Starr will soon be back in her hands. And then she nearly fries the entire legal team, when her heat vision goes awry. Her secret identity survives, as lawyer Irv suggests there's been an explosion, leaving Karen to get herself under control on the roof.
Casually foiling a thief's fun over breakfast, Helena decides she's had enough of Karen refusing to seek help. It's time to reach out to someone she's been avoiding since the Worlds' Finest heroines got stranded on a parallel Earth. Ironically, across town, Karen is having a similar thought ...
... and the thought I'm having is that this is one delightful comic book. Anyone looking for slam-bang action might disagree, though there is superheroic incident here: the book opens with Karen showing a big squid who's boss, there's that heat vision flashpoint and Helen's aforementioned mid-morning crimebusting. And all the time there's superb characterisation - writer Paul Levitz knows his protagonists, and so we know them too. There's Karen, whose self-assuredness stretches to stubbornness and whose pride continually leads to falls. And there's Helena, strong of mind and body, stoic of character, able to put up with her best friend's foibles, but for only so long. Helena wants Karen to face reality, Karen wants Helena to have some fun. Power Girl and Huntress are formidable as single heroines, entertaining as separate characters, but as a pairing they're gold.
This issue is a prelude to the coming crossover with the Batman and Superman series, as the Worlds' Finest heroines confront the alternate world versions of the men who raised them - the World's Finest heroes. We get a taster at the end of this instalment, and it bodes well for the main event.
For now, we have a thoroughly enjoyable day-in-the-life tale of two women trying to fit into a world not their own. I'd like to see more of Helena's daily life, see who she knows apart from Karen, and hopefully that's upcoming. For now, though, I'm content seeing her hang out with Karen, help her through a sticky time; the sheer warmth of their relationship, bickering and all, is so refreshing amid the overall mean-spiritedness of the current DC Universe.
And when Karen needs a new subplot, well, Irv the brief seems awfully understanding in how he protects her secret identity - there's no way you can sit next to a woman as distinctive as Karen Starr, see her emit flash beams from her eyes and not realise she's Power Girl. 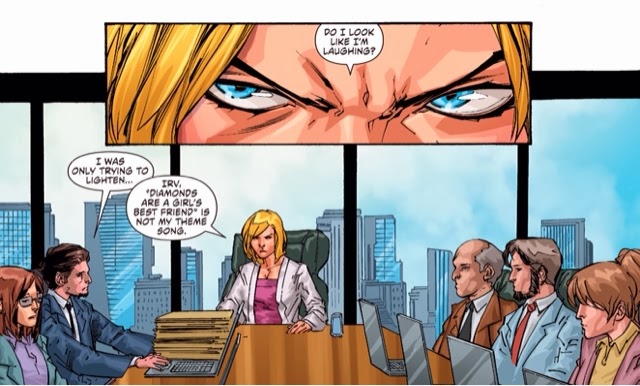 I don't see him becoming a romantic interest, mind - not with that beard. Breakdowns artist Scott McDaniel really does like to draw unlikely facial hair on lawyers, with Irv looking like a beatnik and some guy across the table like an Abe Lincoln cosplayer. He does a good job, mind, providing clear layouts for penciller RB Silva. I do hope we get to see the talented Silva handling more of the workload soon, though, as I prefer a purer presence. I've not seen inker Joe Weems at DC previously, but he's a welcome presence - his experience on Fathom serves him well in the undersea sequence, and the dry land scenes are similarly sharp. 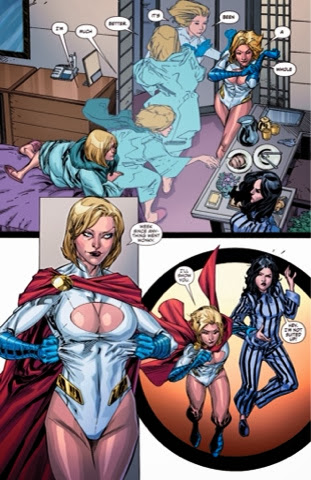 A favourite scene sees Karen change into costume at super-speed, with my only reservation being colourist Jason Wright's decision to light her boobs to draw attention to them. Er, not necessary. Other than that, Wright's colours are as good as anything he's produced since his Secret Six days, with the background environments especially pretty. The letters by Carlos M Mangual are nice and breezy, and  finishing up the package, the cover by Emanuela Lupaccino and Wright is a beaut.
With luck, the coming crossover - First Contact - will bring more people to this series, which has so much promise but hasn't yet caught fire. Right now, I'm seeing sparks.
Carlos M Mangual Huntress Irv the Lawyer Jason Wright Joe Weems Paul Levitz Power Girl RB Silva Scott McDaniel Worlds' Finest: Huntress/Power Girl #19 review