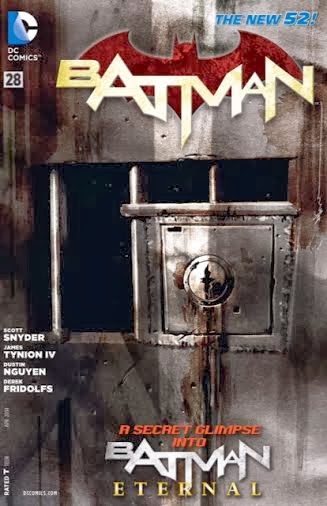 A young woman walks the streets of Gotham. Harper Row is alone and scared, but determined. Determined to meet the city's new kingpin of crime. Soon, she attracts the attention of Gotham's enforcers, and gets herself ushered into 'the only nightclub left in New Gotham'. 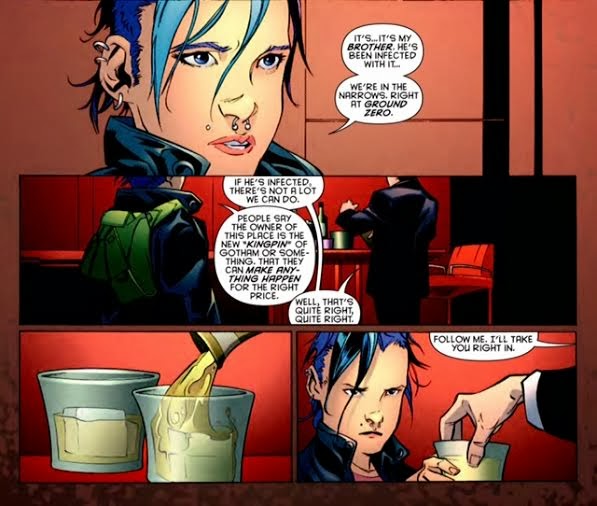 New Gotham? That's right. We're six months into the future of the present day DC Universe and somehow Batman's city is an even darker place than usual. The streets are a wasteland, hope is a precious commodity ... but Harper is fighting back. She's not quite alone, it turns out - Batman has been waiting for her to get inside the club and use her electrical knowhow to let him in too.

And once they're reunited inside, we see there's been a change in the relationship between Batman and Harper. As ever, he barks at her, but he doesn't try to send Harper home ... somehow she's made sidekick. She even exchanges her street clothes for a superhero costume, name and all. Harper isn't the female Nightwing whom promo images had us expecting. She's Bluebird. As in electric blue. Nightzing? 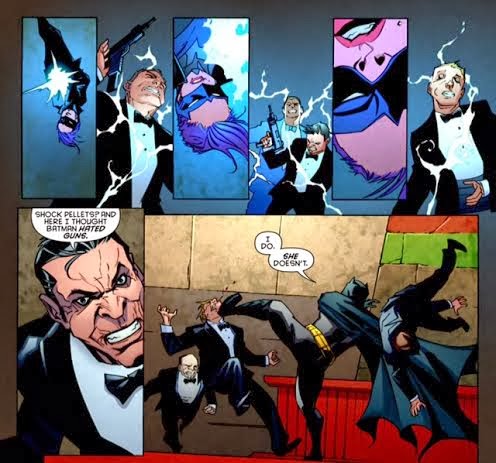 What's more, she's obviously been training like a madwoman since we saw her last, showing off acrobatic moves befitting a Robin. Bluebird also wields a gun which, while not deadly, certainly packs a kick.

There follows a tense meeting with the crimelord who's stepped into the Gotham power vacuum, a tentative deal and the introduction of a character who may be key to beating the next crisis set to hit the city.

The final page virtually guarantees a massive opening for Batman Eternal, which this sidebar from the current Zero Year arc previews. The coming weekly's first storyline is by Scott Snyder, who co-writes this flashforward with James Tynion IV, and it's a grabber from beginning to end with its linked mysteries. The changed Gotham, the whereabouts of the rest of the Batman Family, Harper's promotion to partner, the police's new status, the crime boss's identity, oh, and did I forget to mention there's someone new on the Batcave comms? We don't learn who that is, but I do hope 'Penny One' is OK.

Whatever has happened to Gotham, I rather hope it's not linked to the bloated crossover that is Forever Evil, but given that ends in April, when Eternal begins, I suspect this is indeed the case. Still, it's where Snyder, Tynion and writing partners Ray Fawkes, Tim Seeley and Kyle Higgins go that really matters, and this preview hints that they're heading in surprising directions.

Regular Batman artist Greg Capullo isn't around this issue, he's working on next month's extra-sized conclusion to the current Zero Year arc, but Dustin Nguyen and Derek Fridolfs are filling in. Which means the artwork is differently glorious, with John Kalisz's bright-yet-subtle colours making the nightclub scenes especially lush. I did have a query as to how Harper's lank hair - years of cheap dye have obviously killed the condition - can stand to attention in Bluebird mode, then it struck me: electricity.

The art team's Batman is tremendous, a blocky, imposing figure, while Bluebird's modern punk sensibility is an interesting visual dynamic, Bat-corset and all. The crimelord has a sharp new look - yes, it's someone we know - and the thugs are a commendably natty bunch. While first-rate storytelling means the eye always lands where it needs to in each panel, the 'supporting details' are worth a look too. Sal Cipriano's letters are smooth and sharp, and Nguyen's inviting cover recalls Dave McKean's Sandman work.

Batman Eternal is planned to run for a year and on the evidence of this surprisingly meaty taster issue, I'll be picking it up - and devouring it.
Batman #28 review Bluebird Derek Fridolfs Dustin Nguyen Harper Rowe James Tynion IV John Kalisz Sal Cipriano Scott Snyder