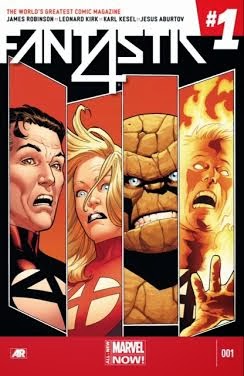 Welcome to volume 427 of the Fantastic Four. Bring a teddy bear.

Because you'll need something to cuddle in order to get through this miserable first issue from James Robinson, Leonard Kirk and Karl Kesel. Three of my favourite talents in comics and I wish they'd all taken the week off. I didn't think 'Fall of the Fantastic Four' meant our heroes were having a lovely autumn, but still ...

Robinson sets the tone immediately with a framing sequence that sees Sue Richards writing a letter to her children, Franklin and Valeria, explaining why everything went to hell for the Fantastic Four. The words are mournful, Sue is small in the opening splash frame, surrounded by black, there's no doubt that this isn't the optimistic FF series of old. We're shown that the team has been splintered, with Reed, Johnny and Ben lost to Sue. Flashing back, we do get a few pages of Lee/Kirby fun, as Mr Fantastic, the Invisible Woman, the Thing and the Human Torch fight veteran Marvel dragon Fin Fang Foom. (Surprisngly, FFF isn't scared off by the FF's new, upsettingly garish red outfits.) Reed frets that the monster's attack on New York makes no sense, even while noting that it's had many forms and motivations over the years. There's a nice reference to the 'Age of Monsters' which ended with the coming of the FF and the heroes who followed. 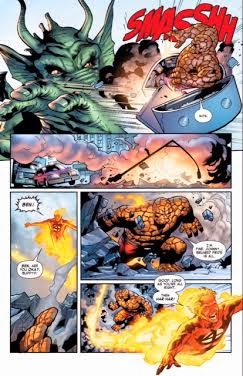 Then it's catch-up time. The Future Foundation kids are still around, creating chaos in the Baxter Building. Johnny is making his zillionth foray into showbiz. Ben and blind sculptor Alicia are having their two-zillionth reconciliation and, overshadowing all else, Sue is devastated that Val has decided to stay in Latveria indefinitely because she's upset with her parents.

And that's the moment that threw me right out of the book. I know that Victor Von Doom helped deliver Valeria, and there's a weird relationship there - Val likes her 'Uncle Doom' - but the FF have just had another massive battle with their deadliest rival. How could Sue and Reed ever countenance their child staying in Latveria, home of Dr Doom? I don't know if Doom is there right now - in last month's FF he'd been thoroughly trounced by Ant-Man, and Val was happily partying with her parents, so she apparently left off-panel - but it doesn't matter. Sue and Reed are letting their child do what she wants on the other side of the world, a world filled with enemies who would love to strike at the FF through her?

If I could, I'd call Comic Book Social Services myself.

There are aspects of the script I like, such as the aforementioned Age of Monsters reference that makes this issue feel like an heir to Marvels and plays into Robinson's love of legacy. The Fin Fang Fight laid down by Kirk and Kesel also evokes the Busiek/Ross classic, with panic on the Manhattan streets as shining gods take on a colossal demon. 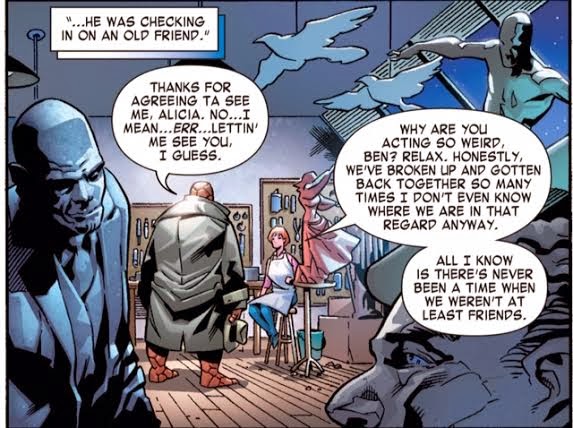 Seeing Ben and Alicia getting back together would be great, as Robinson does relationships well, but the comic's opening, which shows Ben's upcoming problems, sucks out all the optimism.

As for Johnny wanting to be even more famous, that's just standard Human Torch dullness - the character is trapped in a tedious cycle or immaturity and growth. If only he didn't always snap back, like another Mr Fantastic, into being an immature boor.

And the art is lovely throughout, with Kirkman and Kesel, excellent craftsmen both, blending well together, while Jesus Aburtov provides colours so rich they're nigh edible. I have the standard cover by Kirk, which is well done for what it is, but what it is seems to be a house ad. Matters aren't helped by the abomination of a logo plonked atop it, designed by someone who thought 'S7ven' was clever. The book now seems to be called FANT4STK. Very well done!

From a value point of view, Marvel could do a lot better. This is a $3.99 book, even digitally, so there's no 'free digital copy' to ameliorate the price. You get 20 story pages, and two potential story pages wasted by a Jonathan Hickman-style title 'card'. I'd honestly rather those two pages were used for ads, because then I'd likely not notice them and feel cheated.

You know, Robinson isn't a miserable git. There's every reason to believe he'll take the FF to better places; but I don't think I can be bothered with the 'darkest' before the 'dawn'. I'd much rather he gave us his take on the classic team right now, rather than go the deconstruction route. From a Fantastic Four series, I want optimism, awesome and extended family. Bring on Agatha Harkness and Wyatt Wingfoot, give us some Frightful Four and visits from Thundra. Take the team to new places and bring in new friends and foes.