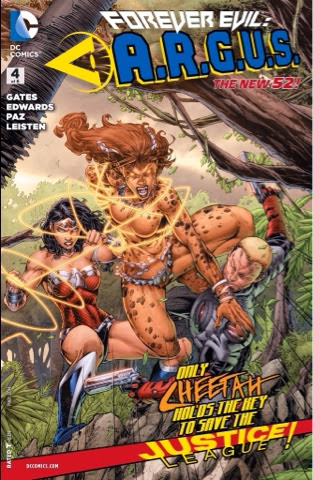 Argus agent Steve Trevor, scientist Martin Stein and villain-turned-ally Killer Frost are hiding out from the Crime Syndicate and their Secret Society stooges. They need to figure out how to free the Justice League from the Firestorm matrix before too many personalities cause the nuclear-powered hero to go boom.
While she's been careful not to respond to their messages, Killer Frost fails to realise her old cronies can trace her through the coin given to each villain by the Syndicate. The baddies appear at Stein's hidden retreat and attack, but Trevor's Argus firepower, Frost's ice power and Stein's brain power ensure their survival.
And in Argus's 'magical panic room', Steve's assistant, Etta Candy, and the President of the United States, er, Barack Obama, are about to learn more about mysterious Argus agent Mr Green
Trevor, Frost and Stein flee via Stein's private teleportation tubes and turn up at the stricken Argus facility in Detroit, where displaced dimensional mind mistress Psi helps Trevor realise what he needs to do to save the League.
And while it has a lot to do with the Cheetah, she's not really around this issue, her cover image being an unnecessary tease. Unnecessary because there are plenty of moments this month which would have made for a compelling cover: the attack on Argus' supposed safe house in Metropolis involving the imposing Black Bison; the villains's swoop on Stein's retreat; Psi's psychic communion with Trevor ... 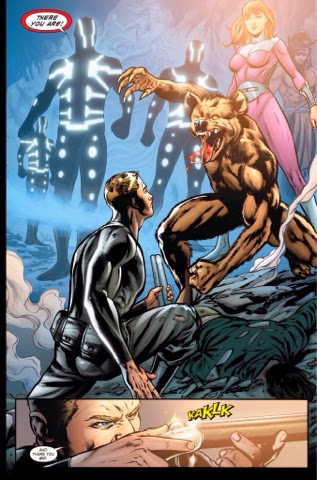 ... and while penciller Brett Booth, inker Norm Rapmund and colourist Andrew Dalhouse do a decent job on the cover, interior penciller Neil Edwards surely earns the right to top the issue with his dynamic storytelling. From first page to last, he squeezes all the drama out of Sterling Gates's script, handling numerous characters and giving them all different treatments. And they all work - it's likely easy for a good artist to design a page around the scary Hyena and Black Bison, but to make the charisma-free likes of Multiplex ('the duplicate villain') takes real skill. And his redesign of old Supergirl antagonist Psi is a big improvement on the original. Inkers Jay Leisten and Jason Paz partner Edwards well, keeping to the DC house style without blanding out the character of the pencils. Colourist Nathan Eyring makes the pages pop, an achievement matched by cover colleague Andrew Dalhouse. The lettering job is shared by Dezi Sienty and Taylor Esposito and their efforts are pleasingly professional.
As for what's being lettered, Sterling Gates proves yet again that he's more than ready for primetime. A man who can make a crossover add-on more compelling than the mother book should be writing one of DC's mainstay titles, a Batman or Suoerman book. It's a shame that Wonder Woman's classic supporting characters and villains - Steve Trevor, Etta Candy and the Cheetah - are never seen in her own book, but at least that frees them up for a spotlight here. Steve earns his front and centre position with a bold performance, showing he's easily 'worthy' of being Diana's partner once her current stunt romance with Superman is spent. Meanwhile, he's battling the baddest of the bad, and more than holding his own.
Gates also does a commendable job giving Stein the intelligence and drive he never had in the shortlived Firestorm series, and continues the development of the new Killer Frost begun in his Villains' Month one-shot. And the surprise arrival of Eighties obscurity Psi in upgraded form is cause for applause. Most impressively of all, he gives the lacklustre Forever Evil 'event' a bit of oomph - even if events here don't finally impact the end of the 'main' story
What more can I say? It's another excellent issue of Forever Evil: Argus and a treat for anyone with a love of the DC Universe, past or present
Andrew Dalhouse Brett Booth Dezi Sienty Forever Evil: Argus #4 review Jason Paz Jay Leisten Nathan Eyring Neil Edwards Norm Rapmund Sterling Gates Taylor Esposito