Well here we are again. Another She-Hulk #1 has made its debut and questions abound about how these new adventures of Jennifer Walters will complement and contribute to her mythos. Writer Charles Soule best known for his current work on Swamp Thing, Thunderbolts, Red Lanterns, Inhumans, and Superman/Wonder Woman gives us a simple tale of shattered expectations, justice sought, and a new direction for our hero to travel.

Despite her time spent with the Future Foundation and guest starring in other titles, Jen has managed to accomplish an incredible amount of work at the law firm that employs her. Yet her not-unreasonable hopes for a bonus are dashed by management and her disappointment compounded by the blunt revelation that she was hired for her super-powered connections, not her skills and experience. With a tap of her finger, Jen quits before finding herself aiding a widow with two young children in a patent dispute with Stark Industries. Despite her friendship with Tony Stark, Jen’s hope to quickly resolve the case with a chat is hindered by his ultra-efficient legal team and security robots. When her charm and legal abilities are stymied, Jen relies on brute strength to win the day, whereas the payoff allows her to go into private practice.

Soule does not waste words nor space with the dialogue, and the wordcount alone makes this issue feel like a bargain at $2.99. Soule’s profession as a lawyer suits him well in crafting an engaging legal drama that highlights the quagmire of litigation without bogging the reader down in the details. One wonders how well he would do in a legal debate with Dan Slott over Superhuman Law. Apparently Jen will forgo her human form for the time being, yet this does not mean her wardrobe will get a reprieve any time soon. 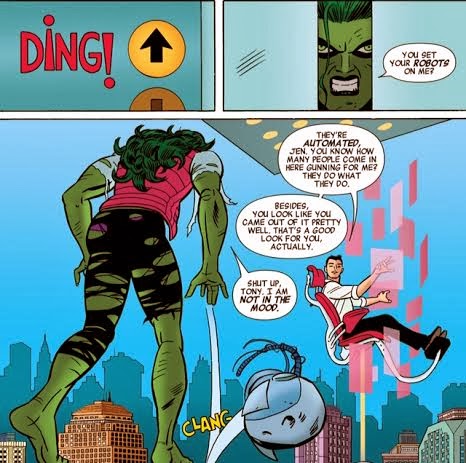 Although Jen’s legal skills are not new to readers, the parade of upcoming guest stars and Jen working for herself for the first time makes one eagerly await the second issue to see where Soule will take her next. Artist Javier Pulido’s She-Hulk is an acquired taste. His depiction of Jen comes across as a very tall and slender gamma powered Ali MacGraw. Her facial expressions convey well her reactions to the events surrounding her, yet she appears more visually appealing at a distance than close up. The backgrounds are richly detailed with Muntsa Vicente’s colours that make Jen’s world warm and inviting. The page layouts invokes the current Hawkeye title, and while that format will not work for every Marvel character, it choreographs Jen’s gigantic frame nicely. One hopes the artistic team does not take offence if fans do not object to guest artists contributing to the series from time to time.

The issue concludes with a display of all the variant covers (usually reserved for the trade paperback) and the introduction of the “Legal Briefs” letters page where readers can submit their thoughts and questions to the editors. The news that the series will have at least 12 issues of standalone adventures tied to an overall story arc gives hope that this title will have some longevity. Now if you excuse me, I have to send an email to “Legal Briefs” on when Wasp will drop by.