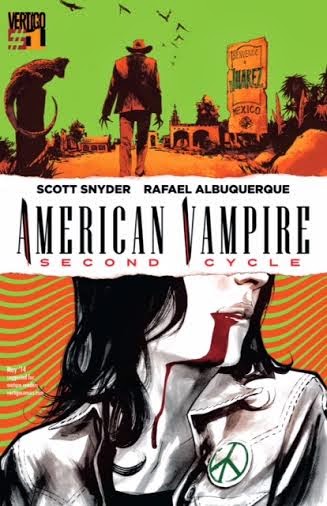 Scott Snyder curates a caveful of flying critters in Batman, but I've missed his take on the vampire kind of bat since his collaboration with Rafael Albuquerque went on hiatus. So it's good to see volume two of American Vampire, their 20th century-spanning horror serial, kick off.

The narrative has moved up in time to the 1960s, where a young woman called Henrietta Jones opens her Kansas farm to runaways. Very special runaways.

You won't be surprised to hear that the kids in question are little vampires. Henrietta, who says she's the daughter of Pearl Jones - heroine of the first volume - aims to give them succour, until such time as she can find them a safe, permanent home. While they're with her, she uses the opportunity to chart the various types of vampires around the world.

On the Texas/Mexico border, meanwhile, Skinner Sweet - the vampire who turned Pearl - is raising hell as he uncovers an old hideaway and reconnects with a former love. By the end of the book he's facing a supernatural force linked to this chapter's opening flashback to 1811, in which a group of First Americans find that it isn't only settlers from overseas who are threatening their way of life.

Snyder's script is a gift to new and old readers alike, reintroducing established characters while recapping the basic premise for newcomers. The new set-up promises a wild ride, both in terms of character and situation. And the dialogue is sparse at times, dense at others - whatever the scene requires.

I'm especially intrigued by a map of vampire types, and how they intersect with such other 'fantasy' beings as trolls and gargoyles - I wonder if we're going to get a wee tie-in to the creature mythos in Snyder's differently excellent The Wake series, which also has an interest in charts and xenomorphology.

Albuquerque's deceptively simple, savage line brings a real kineticism to the pages, never more so than when Skinner takes on a bunch of road rivals hurling grenades.

And the vampire brats are a cute bunch. At first ... 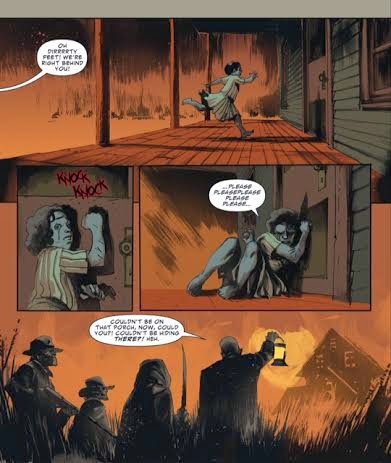 Snyder and Albuquerque aren't the only original creatives back for more - Dave McCaig's colours evoke the physical and emotional landscape of the West with skill, while Steve Wands' subtle lettering helps draw the reader into the story.

Albuquerque references his own American Vampire #1 cover for the new era, and the updated composition works brilliantly. The neon colours, while not reflecting the interiors, speak to the Sixties setting, and look glorious.