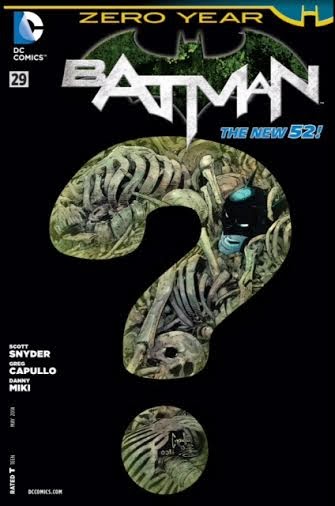 Last month the Zero Year story was set aside for a fill-in to give artist Greg Capullo time to do Scott Snyder's extra-length script justice. This issue we see what a wise move that was, as Capullo, inker Danny Miki and colourist FCO Plascencia produce a meaty chapter that sustains the gorgeousness from beginning to end. Of course, the 40pp story could have been split across two issues, but the plot momentum would have taken a hit. As it is, the conclusion to Zero Year's Riddler sequence, Dark City, has room to breathe, as a finely synched creative team stamp 'classic' all over this look back at Batman's earliest days. Unless a ball is dropped in the final third - and I can't see that as Snyder and co have been getting better with every outing - this run is going to stand alongside the best of Batman on classier bookshelves.

There are twists and turns aplenty, as Batman and Jim Gordon act on two fronts in a bid to stop Riddler bringing chaos to Gotham. If you've been around since the start of Zero Year, which post-dates this sequence, you'll have an inkling as to how well they do, but the journey really is worth your time. Among other things, we've had background on Gordon's difficult first days after joining Gotham PD, a glance back at Bruce's world travels and an expanded look at the Waynes' tragic trip to see Zorro at the cinema. 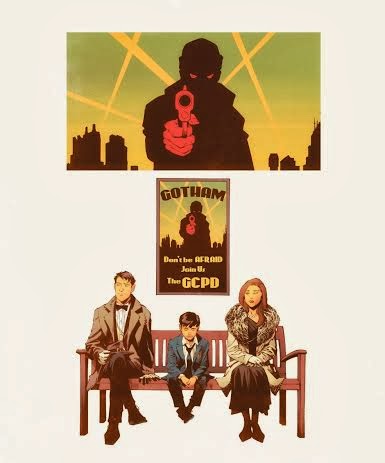 It's the day of the cinema trip that opens this instalment, as we join Martha, Thomas and a contrite Bruce Wayne at police headquarters in a striking, silent page. Words just aren't necessary as the demeanour of the Waynes tell its own story. And when the 'sound comes on', the family dynamic is so wonderful that it really makes me mourn for the loss that's coming to Bruce. Snyder elegantly give us little moments that anticipate Bruce's future without hitting us over the head with the Significant Stick.

For example, later in the issue, as the narrative rejoins the Zero Year 'present day', a fight between Batman and Dr Death plays out alongside a dialogue that likely inspires the bat-signal, while making sense of the Tokyo Moon flashback of a couple of issues back. The mad medic's near-monologue also makes Bruce a little bit complicit in Gotham's woes, in his own mind at least.

Elsewhere, Gordon tried to foil the Riddler's plans at Wayne Tower in a scene that shows how entertainingly bonkers and dangerous Edward Nygma is. As a cop, Gordon tends to be reactive rather than proactive, so when he's facing someone who's had time to plan, an urban god of mischief, without the shoot-first ruthlessness of his colleagues he's not going to win the day.

Meanwhile, we see that Commissioner Loeb isn't a total stinker, but officer Dan Corrigan is. Alfred is off-panel but ever the voice of sanity. And the Bat Blimp makes its debut, and young Batman couldn't be happier. 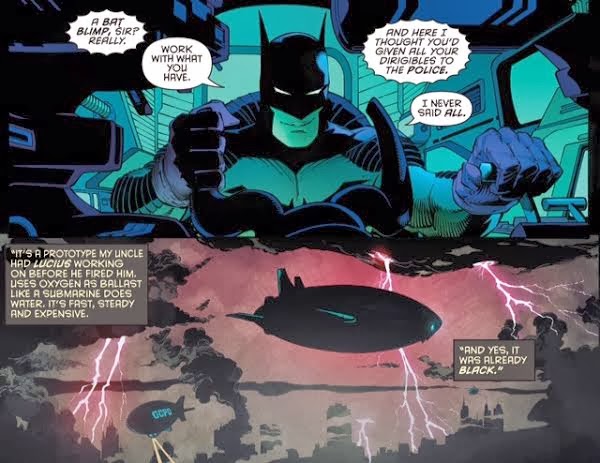 Demonstrating fine control of his material, Snyder has past and present sequences dance alongside one another rather than bump noses, always informing, never distracting. The tone of the script is intense, without being OTT - I'm not one who needs comics 'validated' by being made into films, but dang, this story would make for a cracking screen Batman tale.

And the art! It's simply sumptuous, full of striking illustrations which never fail to serve the storytelling. When, for example, one of the most iconic Batman images shows up, it's a page-turn splash, perfectly placed within the issue as the only visual that would make sense here.

The character work is similarly commendable. Riddler, Dr Death and Gordon are perfect visual representations of the personalities laid down by Snyder. And look at the young Bruce, who has aspects of both Thomas and Martha without being a tiny double of either. 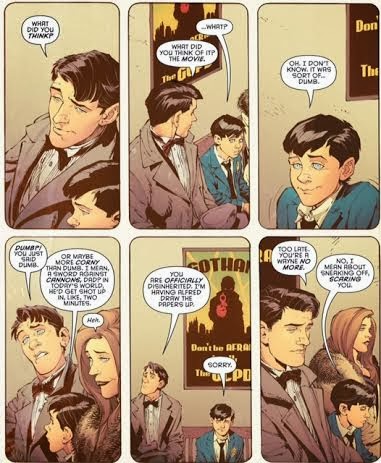 Capullo controls the material with delicacy and precision, presenting a fully realised Gotham that should set the standard for some time to come.

Miki's inks are as sharp as Dr Destiny's teeth, while Plascencia's colour palettes - ranging from naturalistic to neon - continue to show that a Batman story doesn't have to be gloomy to be good. And Steve Wands' lettering choices always match the character and moment. Kudos, too, to Katie Kubert for her contributions - you don't get a comic this good without a smart editor.

You know the cliche about 'running out of praise' for a piece of art? I'm not. The more I look at this comic, the more I see to laud. But rather than bore you to tears, I'll voice the implicit recommendation - don't miss Zero Year, it's the Legend of the Batman refreshed for a new generation.
Batman #29 review Danny Miki Dark City dr Death FCO Plascencia Greg Capullo Riddler Scott Snyder Steve Wands Zero Year