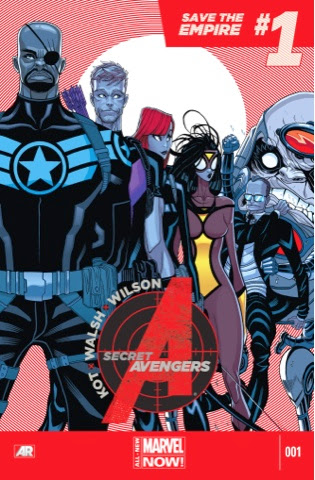 I never tried the last run of Secret Avengers, the idea of memory-lapse good guys doing terrible things being an instant turn-off. Hearing the gimmick had been jettisoned, and having enjoyed writer Ales Kot's too-short Suicide Squad run, I decided to give this a try
I almost changed my mind on seeing the cover, which is horrendous, populated by weird bullet-headed folk intended to be, from left, Nick Fury Jr, Hawkeye, Black Widow, Spider-Woman, Agent Phil Coulson and - recognisable, because he always has a big head - MODOK. It's the work of Tradd Moore, who I believe is pretty popular. I guess I'm just a dinosaur.
And the logo is as barely there chronic as those on the rest of the Avengers line.
The interior work by Michael Walsh, coloured by Matthew Wilson, is more my cup of cocoa, with recognisability and style not proving mutually exclusive. I love the deceptively scrappy look, there's a real energy and effective storytelling. The characters, even the monstrous MODOK, are marvellously expressive and there's a fine use of angles. Walsh's capacity for showing movement makes for some great moments, such as this attack by AIM agents on Hawkeye. 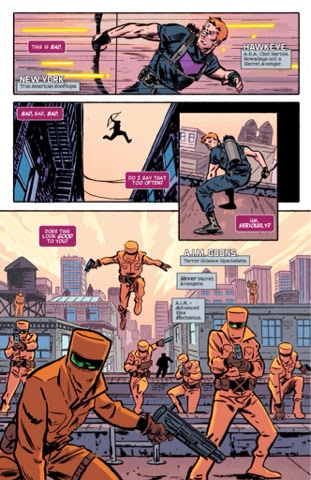 Clint Barton is very much the same guy here as in his own book - a bit of a mess. I'm OK with that over there, as the series' mission statement is: 'what Clint does when he's not with the Avengers'. In an actual Avengers story, though, Hawkeye should show why he's worthy of being among Earth's Mightiest Heroes. He's competent here, but it's more despite himself than because he's an experienced adventurer.
The story posits that the latest incarnation of the Secret Avengers is, well, the gang on the front, with orders given by SHIELD chief Maria Hill.
I am sooooo sick of Maria Hill, Agent of HARRIDAN, the most unprofessional spy in comics. She's all over the Marvel Universe, yelling at superheroes to do her dirty work. Why do the good guys even need SHIELD to point out there's  a job to be done, when they managed for decades by themselves?
I'm also a tad tired of Coulson, and object to Nick Fury Jr on movie pandering grounds. Actually, I'm bored with Black Widow too, she gets far more comics time than her popularity merits; though if Kot plays her as throwback Russian spy, as Matt Fraction did brilliantly in Hawkeye recently, I'll be a happy bunny. Spider-Woman hasn't had a good showcase for decades, and I suspect Kot could do something interesting with her. MODOK? It seems he's signed up with Hill to create murder machines for SHIELD, which is not strictly on.
Oh, and AIM. Enough AIM already.

Given that I'm not mad keen on the cast or villains, it's a credit to the creative team that I enjoyed this issue as much as I did. Coulson and Fury fighting the other Fury - the Captain Britain monstrosity - in space entertains, while Jessica and Natasha's visit to a Russian sauna is similarly fun. I don't get why the Fury business is on the downlow, so much so that Hill risks her agents' lives rather than call in a cosmic-type Avenger to help them in outer space. Perhaps we'll find that out next time, as it seems the Fury will be back. We'll also see what becomes of the new Latverian SHIELD agent who wipes the smile off Hill's face - maybe he'll get a medal. 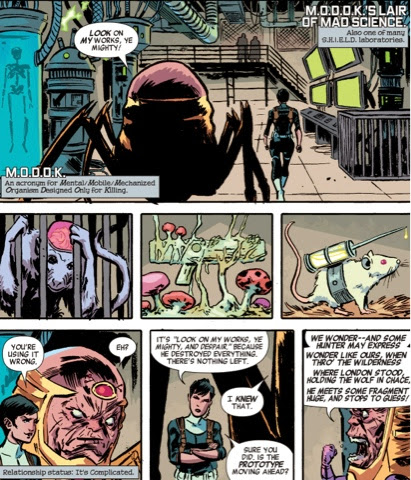 MODOK is my favourite thing in the book, desperately trying to impress Maria Hill, apparently not realising that she's too vile even for him. His Lair of Mad Science is a hoot, in a disturbing way, while Walsh has him looking terribly creepy on those robotic spider-legs.
My least-favourite thing is the archness of the narrative tone, something that has become a bit of a Marvel cliche, putting a barrier between reader and story. Kot is a very capable writer and I'd like him to find his own voice, rather than conjure up the likes of Matt Fraction, whether deliberately or not. He does borrow a famous visual gag from Hawkeye's own book, to decent effect, but I hope he's gotten the Fraction homages out of his system now - I really do not wish to see this book turned over to an infomatics-happy dog anytime soon.
This first issue, while a decent diversion with some moments of inspiration, doesn't put the book on my must-read list, but it does get Secret Avengers a few more issues' trial. The dialogue is sharp, the lunacy is appreciated and the art is wonderful, but the cast, scenario and tone isn't quite for me.
Ales Kot Matthew Wilson Michael Walsh Modok Secret Avengers #1 SHIELD